END_OF_DOCUMENT_TOKEN_TO_BE_REPLACED

GOLD BARS traded in London's wholesale market rose to show a small gain for the week so far on Thursday against a rising US Dollar, trading at $1932 per ounce as global stocks headed for a 3rd daily loss and longer-term interest rates rose yet again following what some analysts called 'hawkish' meeting notes from the Federal Reserve's March decision.
With US inflation running at 7.5%, last month's Fed meeting raised its key overnight rate from zero to a ceiling of 0.5%.
Inflation-adjusted US bond yields today extended their steepest jump since the gold price crash of spring 2013, reaching new 2-year highs of minus 0.20% on benchmark TIPS yields as latest data showed continuing claims for US jobless benefits rose 1.1% last week from the prior week's new 52-year low, but initial claims for unemployment aid dropped back, matching mid-March's level at the lowest count since November 1968.
"Move to a neutral monetary policy 'expeditiously' would be appropriate," writes bullion-market analyst Rhona O'Connell, glossing the Fed minutes for clients of brokerage StoneX.
"Subject to future economic and financial development, a tightening could be warranted. But, especially with the Ukraine backdrop, risk management remains key."
The G7 group of Western nations meantime condemned "in the strongest terms the atrocities committed by the Russian armed forces in Bucha and a number of other Ukrainian towns," while the government in Kyiv urged citizens of the eastern Donbass area to flee before Moscow launches an expected attempt to consolidate its grip on the region.
Curbed by the economic threats of the Ukraine war, "many" participants in the Fed's March meeting had wanted to raise rates more quickly, the minutes show.
The Committee also agreed in outline a plan to allow the central bank's $8.9 trillion balancesheet of QE bond holdings to "run off" starting from May, perhaps as fast as $95 billion per month.
That compares with a peak  run-off pace of $50bn per month from 2017 to 2019, a period from which Fed participants said they should learn "lessons" in not reducing the balancesheet fast enough when the economy is strong.
Since the Fed began growing its balancesheet again in August 2019 – followed a month later by the European Central Bank also returning to new QE – gold prices have now risen by 35%.
The Nasdaq Composite index of US technology and other corporate shares has risen 71%.
Ten-year Treasury yields are however 2/3rds of a percentage point higher, albeit with a slump to new record lows beneath 0.50% during the Covid Crisis of 2020. 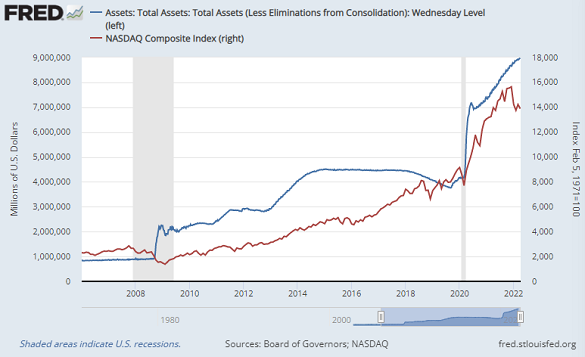 Priced in the Euro, gold bullion bars rose more steeply on Thursday, nearing 2-week highs above €1772 even as longer-term German, French and Italian borrowing costs jumped following the release of notes from the ECB's latest policy meeting – again classed as 'hawkish' by some analysts – suggesting that overnight rates may be raised from minus 0.5% before the end of this year.
Consumer-price inflation across the 19-nation Eurozone also rose to 7.5% last month.
With benchmark German Bund yields testing last month's 3-year high near 0.70% per annum, the Eurostoxx 600 index of shares erased an earlier 0.8% gain.
European crude oil meantime rallied after dipping to $100 per barrel for the first time in 3 weeks, and natural gas prices fell back towards 2-week lows, costing less than half of start-March's spike to all-time records for May 2022 contracts.
That was still 6 times the price of this time last year however.
With many commercial traders refusing to buy Russian energy exports as European governments weigh yet-tighter sanctions, "Taif is shut due to overstocking," Reuters quotes a source at that central Russian refining plant, where 150,000 barrels per day of crude oil are usually converted into petroleum products.
Exports of Russian oil-product exports to China and Kazakhstan in contrast leapt last month, the Interfax news agency says, rising over 43% for fuel oil to China and doubling for bitumen to Kazakhstan, which also imported Russian jet fuel "for the first time in months," according to S&P Global.
"The guidance from the Fed [is] that it wants to increase interest rates faster going forward," says Swiss bullion bank UBS's analyst Giovanni Staunovo.
"[But] on the other side we still see inflation increasing. [So] we continue to see relatively strong demand for physical gold bars and coins across the board, [plus] market uncertainty and concerns about economic growth down the road because of high energy prices."