END_OF_DOCUMENT_TOKEN_TO_BE_REPLACED

GOLD PRICES slipped against the US Dollar but held above $1800 per ounce in London on Wednesday, a level breached only 8 times before, as longer-term interest rates halted the steep fall following much weaker-than-expected activity data from the US services sector, where employers in June cut jobs for the first time since December.
Analysts and traders meantime looked ahead to today's release of meeting notes from the US Federal Reserve's June decision, when it left interest rates at zero and QE bond purchases at a record pace but signalled an earlier 'tapering' and rate rise than previously projected.
"While employment contracting could be considered concerning," says one interest-rate strategist of yesterday's US services survey, "comments from the release suggest the weakness is driven more by a lack of labor supply, not a lack of demand."
Although the Institute for Supply Management survey of services firms signalled a retreat from May's record burst of activity, the ISM's earlier manufacturing-sector analysts "points to higher inflation" according to consultancy Capital Economics, saying that the ISM's prices paid index has reached the highest since the 1970s – "consistent with CPI inflation exceeding 5% in the next few months."
Today's hard data however said Germany's industrial production and Italy's retail sales both failed to meet analyst forecasts for May, while UK mortgage lender the Halifax said average house prices rose 8.8% per year in June, two full percentage points below forecast.
Despite the worsening global wave of Covid, the European Commission raised its economic forecasts for the 19-nation Eurozone to 4.8% growth in 2021 and 4.5% for 2022.
"The economic projections from the Fed's June meeting clearly suggest a change in tone," says brokerage Stone X in notes to clients.
"Today's Minutes will throw more light on it...[But] there is little doubt though that the hawkish tone is intensifying."
Yesterday's rise in Dollar gold prices up through $1800 per ounce were the 9th time in history that the precious metal has broken that level.
Two of those breaches came in 2011, three of them amid the Covid Crisis of 2020, and now 4 so far in 2021. 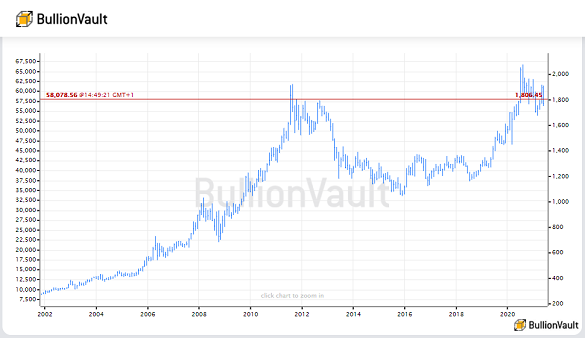 Longer-term interest rates bounced as gold prices slipped at the start of US trade on Wednesday, but the bond market continued to ask lower borrowing costs than before Tuesday's ISM services report.
Adjusting for inflation expectations, 10-year TIPS yields fell below minus 1.0% per annum for the first time since February, suggesting a 10% real loss for conventional bond holders over the decade to 2031.
That level of real bond yields marked a new series low when first breached at the end of July 2020.
Gold was then trading $160 above today's price, peaking at $2075 per ounce one week later as real 10-year yields set their current series low of -1.08% per annum.
Despite Tuesday's news that the Reserve Bank of Australia will start tapering the pace of its QE bond buying from September, Australia's 10-year bond yield has now erased almost half of New Year 2021's surge towards 2-year highs from March 2020's new record lows.
Ten-year Aussie yields today fell to new 5-month lows beneath 1.36% per annum after briefly popping to 1.48% on yesterday's RBA news.
Japanese and UK bond yields also fell towards 5-month lows on Wednesday, while Germany's 10-year bond rate reached minus 0.29% per annum before ticking higher.
The lowest since mid-April, and down 20 basis points from mid-May's 2-year high, that was a record negative borrowing cost for Berlin when first reached in summer 2019.
Global stock markets were mixed Wednesday after New York returned from the Independence Day holiday to snap the S&P500 index's run of 7 consecutive all-time record highs with a 0.2% loss overnight.
China today bounced 1.1%, Japan lost 1.0%, Germany gained 1.0% and the UK rose 0.3% by lunchtime in London.
Crude oil meantime stayed highly volatile after sinking 3% from new 3-year highs above $77.80 per barrel yesterday amid the breakdown of output-quota talks among the Opec+ cartel of producer nations.
Regaining half of that plunge, European benchmark Brent crude fell back again towards $74 before bouncing $1 per barrel.
"The Opec+ deadlock continues," Reuters quotes one analyst, "putting the market in a position of risking a sizeable undersupply in August.
"US shale producers also seem to be reluctant to invest."