END_OF_DOCUMENT_TOKEN_TO_BE_REPLACED

BUY GOLD prices in London's wholesale bullion market traded in a tight range around $1775 per ounce ahead of the US Fed's widely-expected news on tapering QE stimulus on Wednesday, while global stock markets extended their bounce but analysts continued to forecast a steep drop, with Morgan Stanley warning that the S&P500 could lose 20%.
Monday's 1.7% drop in US equities marked the S&P500's worst day since May, and capped the worst stretch of losing days since the Covid Crash of Feb-March 2020.
Yesterday's rally left the S&P with "bad breadth" says a chart headline at Bloomberg, pointing to the how the fewest member since October last year are now trading above their 50-day moving averages.
"Small caps and lower quality stocks have underperformed the S&P500 significantly," says US investment bank Morgan Stanley's chief investment officer Mike Wilson, and "Now we're entering [a] chapter...[where] investors can no longer hide from the reality of what [this] mid-cycle transition brings" economically.
Citing "a deceleration in [US] economic and earnings momentum", Wilson warns that because "this recession and recovery were much sharper than normal, we should expect a greater deceleration in growth this time."
The slowdown in new government stimulus following last year's historic injections means that US corporations' "very high operating leverage and profitability" will reverse, while today's Federal Reserve decision on tapering QE is "the other headwind for markets."
"How bad will it get? We've been suggesting a 10-15% correction in the S&P 500 is inevitable...However, given how long this has taken to play out, the drawdown could end up being closer to 20% if the growth slowdown ends up being worse than normal." 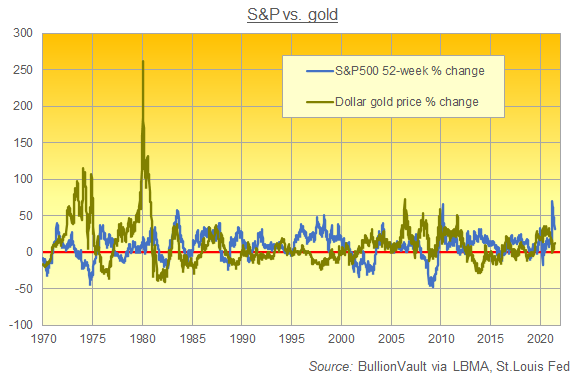 Since the start of 1970, and on week-end data, the S&P500 index has traded 1/5th lower or worse from 52 weeks before just over 5% of the time.
On those occasions, Dollar prices to buy gold rose 71% of the time on a 1-year basis, averaging a gain of 15.4%.
So far in the 21st Century – and with the last such period coming in August 2009 – the S&P has traded 1/5th lower or worse from 1 year earlier more than 8% of the time.
Gold rose in almost 3/4 of those occasions to average 7.1% gains.
"In 2011, we had a 19% drawdown," says Wilson at Morgan Stanley. "Therefore, we continue to think investors should hunker down a bit more than normal and skew portfolios toward defensive quality rather than large-cap growth quality" in equity portfolios.
The major US bullion-backed ETF investment products were unchanged in size Tuesday, with no need to sell or buy gold or silver in response to a changing number of shares in issue.
With the debt-laden Evergrande property giant  announcing a deal with some creditors today, Shanghai's return from the Mid-Autumn Festival today saw prices to buy gold in China – the metal's No.1 consumer market – rise to nearly $10 per ounce above London quotes, the biggest incentive to new imports since late May and above the Shanghai premiums historic average.
Today's US Fed decision will lay out the central bank's plans for tapering its current $120bn per month of new QE bond buying according to consensus predictions among analysts and pundits.
Looking further ahead to February 2023, betting on interest-rate futures at US derivatives exchange the CME now puts the likelihood of Fed rates still being capped at 0.25% at nearly 43%.
That's up from 30% a month ago and is now the single largest forecast, as betting on 1 or more rates hikes over the next 18 months has fallen back.
"What could change our view" of the S&P500 losing 10-20% ahead, asks Wilson at Morgan Stanley.
"Fiscal stimulus directed right at the consumer...from either US or China. Second...a Fed that completely reverses course this week and says they no longer plan to taper...
"Both seem unlikely at this stage, but if markets become somewhat dislocated, we could then see a reaction from policymakers later this fall."
"Gold is safe haven only ONCE the dust settles, hardly during it," says a trading note from Swiss refiners and finance group MKS Pamp, noting that gold ETFs "are an equity/inflation hedge, [so] the unwind of equities risks a simultaneous unwind of gold ETF exposure."