END_OF_DOCUMENT_TOKEN_TO_BE_REPLACED

Platinum vital to PEM electrolysis...
IT IS WIDELY acknowledged that green hydrogen has the potential to play a significant role in decarbonising the global economy, says the World Platinum Investment Council.
Yet, at present, only 1% of all hydrogen produced is 'green'.
Green hydrogen is a zero-emissions, sustainable fuel made by using renewable energy – primarily wind and solar – to power electrolysis that splits water into its constituent parts.
Platinum, in conjunction with iridium, is used as a catalyst in Proton Exchange Membrane (PEM) electrolysers that use polymer electrolyte, one of the two leading electrolysis technologies available in the market.
Until now, cost has been a significant barrier to wider adoption of green hydrogen, with analysis showing that a price of US$2 per kilogram represents the likely tipping point at which green hydrogen should become the energy source of choice across multiple sectors —including steel and fertiliser production, power generation and transportation.
The key to driving down costs is to build out additional capacity on a large 'gigawatt' scale to achieve the economies of scale needed to make green hydrogen production economically viable.
The new 'Green Hydrogen Catapult' initiative will see green hydrogen industry leaders take on this challenge, targeting the deployment of 25 gigawatts of renewables-based hydrogen production by 2026, with a view to halving the current cost of green hydrogen to below US$2 per kilogram and increasing production fiftyfold.
In establishing the initiative, the world-leading enterprises behind the Green Hydrogen Catapult are collaborating to accelerate the necessary technological and infrastructure advancements, as well as related market development. In addition, the Catapult target requires investment of roughly US$110 billion.
This is by no means the only plan on the horizon. At the beginning of this year Linde, a global leader in the production, processing, storage and distribution of hydrogen, announced it is to build, own and operate the world's largest PEM electrolyser plant at the Leuna Chemical Complex in Germany.
This new 24-megawatt electrolyser will produce green hydrogen to supply Linde's industrial customers through the company's existing pipeline network. In addition, Linde will distribute liquefied green hydrogen to refuelling stations and other industrial customers in the region.
Once constructed, the facility will produce enough green hydrogen to fuel 600 fuel cell buses over a distance of 40 million kilometres and saving up to 40,000 tons of carbon dioxide tailpipe emissions per year. The plant is due to start production in the second half of 2022.
PEM electrolysis is a relatively new technology that offers advantages over other electrolysers, being compact and more able to cope with the intermittent nature of electricity from wind or solar sources. In fact, Siemens Gamesa and Siemens Energy are working on a potentially game-changing project to fully integrate a PEM electrolyser into an offshore wind turbine as a single synchronised system to directly produce green hydrogen.
Although in its developmental stages, the system has the potential to lower the cost of hydrogen by being able to run off grid. 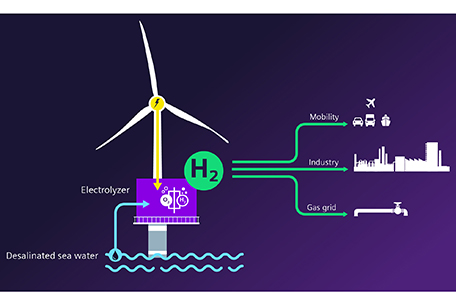 In the UK, Johnson Matthey, the global science and chemicals company, sees PEM electrolysers as a growth area, too. It has recently announced it is increasing capacity at its Swindon plant to enable it to produce enough platinum and iridium catalyst-coated membranes for tens of megawatts of hydrogen production, enough to power several thousand homes. Its roadmap for the future envisages scaling to multi-gigawatt manufacturing capacity in line with customer demand.
It is now estimated that green hydrogen could supply up to 25% of the world's energy needs and become a US$10 trillion addressable market by 2050. These projections are underpinned by the recent emergence of strong green hydrogen-focused national hydrogen strategies, including those announced by Australia, Chile, Germany, the EU, Japan, New Zealand, Portugal, Spain and South Korea. The USA re-joining the Paris Climate agreement should also bolster momentum and accelerate hydrogen adoption.
The rapid growth of the PEM electrolysis market clearly has the potential to benefit platinum demand, albeit modestly in the short- to medium-term. What is more, expansion of hydrogen production capacity and associated infrastructure will facilitate the adoption of PEM fuel cell electric vehicles. The combined impact on platinum demand as these two PEM technologies take off will be significant over the longer term.