END_OF_DOCUMENT_TOKEN_TO_BE_REPLACED

US president-elect has got markets so confused, gold has sunk like it's 1981...
SO ONCE AGAIN we're out of step, writes Adrian Ash at BullionVault, and not only in thinking gold prices look cheap.
Christmas now starts straight after Remembrance Day. It's okay to stare at your phone when crossing the street or jeering in Parliament. And the Dollar is setting new 13-year highs...apparently because America's president-elect vows to borrow and spend, flashing his own record of defaulting on debt as proof that he knows what he's doing.
"Part of the reason that the Dollar has risen so fast since the election," explains Steve Barrow at commodities and bullion bank ICBC Standard, "is that the market sees echoes of Reagan's policies of the early 1980s.
"[Reagan's] focus on tax cuts for the rich and increased defence spending (plus the Fed's huge monetary restraint) made the Dollar soar by as much as 50% in the first few years of Reagan's presidency."
But Reagan never campaigned on tripling the US national debt inside 10 years, even though that's what he achieved. Whereas Trump's list of spending and tax-cut plans add $10 trillion or more to the current $20trn total by 2026 according to pretty much everyone who's looked.
While Ronald urged Russia to "tear down this wall!", the Donald wants to build one of his own. Reagan also upset the Republican Party, but his " quarrel or two [was] only as to the method of attaining a goal," not an outright attack. The Gipper's famous tax cuts of 1981 didn't hold for long either. By the end of Reagan's second term, new tax hikes and laws had clawed back half of that initial reduction. But still the Gipper left a "sad legacy" of over-spending, as the Mises Institute pointed out when Reagan left office in 1988, having sent the federal debt soaring from $994 billion 8 years earlier to $2.9 trillion.
The monetary backdrop could hardly look more different meantime. Barrow's word "restraint" is a relative term, whether for central bankers or career crack-heads, and a sober hour at least makes a good start. But the US Fed welcomed Reagan's first term in Jan. 1981 with interest rates at 19%...the highest level in history. New Year 2017's Trump inauguration will find a ceiling on the Fed Funds rate at 0.75% (and a likely level held nearer 0.60%)...still pretty much the cheapest money in history.
Instead of wringing inflation out of the system as Paul Volcker did in the early '80s, the Fed under Janet Yellen is hoping to see inflation dragged up, kicking and screaming, from the lowest level since Donald Trump wore short trousers.
The Donald's new super Dollar won't help – exactly the opposite risk to the UK's slow-burning Brexit inflation shock. But there's the rub for FX traders right now. Because, while the Fed will start 2017 with a policy of raising interest rates just 0.25 percentage points every 12 months, that really does look like monetary "restraint" next to Europe's incontinence and Japan's insanity.
"Over time, Trump's presidency will not benefit the Dollar," reckons Benjamin Cohen, a professor at the University of California, Santa Barbara, "because it won't benefit the US economy." But how very late 20th-century! Weak currencies create strong economies today, or so everyone from the Bank of Japan to the Bank of England keeps hoping.
Trump himself said on the campaign trail he'd whack China with 45% trade tariffs for being a "currency manipulator" – ie, keeping the Yuan too low, and so pushing the greenback too high to let the US export more and import less.
"If Trump follows through on [such] campaign promises," reckons Cohen, "the greenback could eventually be toppled from the peak of the global monetary hierarchy, as a widening range of alternatives emerge to pull it down."
How so? Quitting the planned TPP deal will let China "rewrite the economic rules of the road at the expense of American workers," says John 'Loser' McCain. Beijing has piped up too, refuting Trump's "manipulation" claim, citing World Trade Organization rules (like the ones Dubya Bush flouted over steel imports in 2002), and offering to lead a free-trade push in Asia if Trump proves all Donald and no Ronald on globalization.
Yet here we are, with the Dollar looking pretty darn almighty again, extending its unstoppable surge – during which it touched a 30-year record pace – from Obama's second term to hit new 13-year highs this week.
That makes the biggest surprise of the Trump victory so far the run of new record highs in the US stock market. Because, like modern central bankers all think of the economy, you need a weak currency to boost stock prices. 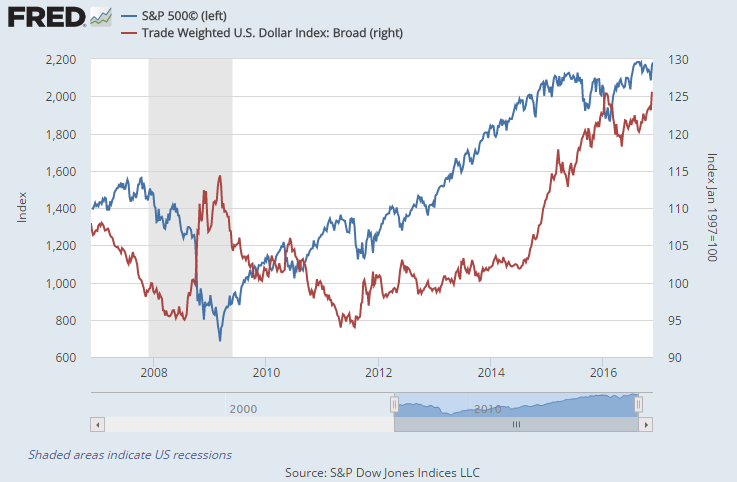 On a weekly basis, the US Dollar and the S&P500 index have moved in the same direction together, up or down, some 37% of the time over the last decade. But that includes a lot of nothing moves. And when it counts, the Dollar and the stock market split apart.
Little wonder then that gold prices have sunk since Trump won. Because putting aside the impact of rising bond yields – spooked by Donald's promises to make like Ronald, spending while cutting tax – stocks and the Dollar represent gold's two plainest competitors for investment cash amongst Western fund managers. And over the last 3 weeks, both the Dollar and the S&P500 index have risen together. Sharply.
Can this go on? Since 2006, gold lost value 71% of the time that the Dollar and the S&P both rose. But gold prices rose in three-quarters of the weeks that both the Dollar and the S&P500 fell.
A short-term trade might look at the S&P and the greenback both taking a pause after their Trump-tastic jumps. An investor wanting to hedge a little of those gains might also look at what the Fed's weak monetary policy, plus Trump's spending and tax-cutting plans, suggest for the Dollar's long-term value. And you might ask what his stance on trade tariffs mean for US Inc.'s longer-term revenues and growth.
Right now however – and again ignoring the extra opportunity cost of investing in gold due to those rising US Treasury bond yields – American gold investment demand, or rather its lack, could well continue to weigh on bullion prices too.
It's no secret that gold investors tend to dress to the right, rather than voting Democrat. Now their man's in the White House (or soon will be), who needs gold? Who needed gold last time a Republican started measuring the drapes?