END_OF_DOCUMENT_TOKEN_TO_BE_REPLACED

Silver investors "disillusioned, unfortunately," says CPM Group's new Yearbook...
SILVER INVESTMENT demand is set to fall again in 2014 according to one precious metals consultancy, knocking prices lower for a third year running despite what other analysts agree is an improving industrial outlook.
"Shorter-term investors," says the CPM Group in New York, now launching its Silver Yearbook 2014, "were disillusioned [over the last 3 years] by the inability of silver to rise strongly following the highs reached in 2011."
Selling as prices tumbled from silver's $50 peak of April 2011 to just $18.25 per ounce in June 2013, "That is unfortunate for these investors," says the Yearbook. "Because there are many economic, political and financial problems still at large in the world likely to negatively affect stocks, bonds, and other traditional investments."
Net investment demand for silver bars and coins fell more than 40% last year, CPM Group reckons, hitting the lowest level since 2008 at just over 105 million ounces.
Equal to some 11% of total refined supply on CPM's 2013 data, that would put silver investment down from a peak of almost 25% in 2011 according to separate figures from Thomson Reuters GFMS, produced for the Silver Institute.
But while "buying and holding silver as partial insurance and protection still makes sense [as] part of a sound investment strategy," says CPM's new Yearbook, it forecasts another decline in net demand from investors for 2014, down almost one-fifth again to 87 million ounces.
Looking however at the industrial side of the market – which in contrast to silver investment's 7.5% has averaged some 65% of total fabrication over the last decade – the "outlook remains positive for the rest of 2014," says London-based Metals Focus, also forecasting rising demand from European industrial users into 2015. 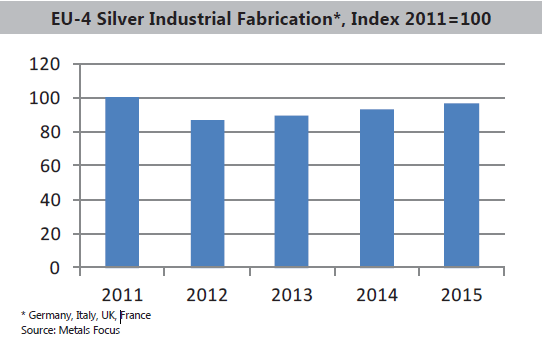 Reporting developments in Germany, Metals Focus says the increase in industrial as opposed to investment silver demand "has been spearheaded by electronics and electrical demand...particularly in the automotive sector."
There, rising vehicle production has coincided with increased "silver content per automobile" thanks to additional technology for passenger safety and comfort.
Increased construction activity in Germany, Europe's largest single economy, will also boost silver demand, the report says. More globally, industrial silver use looks "positive" thanks to "less emphasis on thrifting and substitution" – driven, says Metals Focus, by 2013's "major fall in silver prices" as well as growing "technological limitations".
Falling silver investment demand, however, will still see prices drop to an average $20.37 per ounce in 2014, reckons CPM Group's managing director Jeffrey Christian, quoted by Bloomberg, down 14% from the 2013 average.
Silver mining costs are unlikely to support prices just yet, says bullion bank HSBC analyst Howard Wen, speaking to Barron's magazine. Because all-in production costs now come between $15 and $17 per ounce, offering a good margin for producers to increase output still further.
Global silver supplies will be little changed this year overall from 2013, says CPM. Less than 30% of the world's silver output comes from "primary" mines, where silver is the sought-after resource. The bulk is a byproduct of other mining, typically copper, lead, zinc or gold.