END_OF_DOCUMENT_TOKEN_TO_BE_REPLACED

What do the Comex silver bears know...?
YOU MIGHT think hedge fund traders have called it right so far in 2018 on silver investing, writes Adrian Ash at BullionVault.
As a group, the 'Managed Money' category of traders betting on Comex silver contracts stayed bearish overall in mid-to-late February, having turned against the metal in December for the first time since July.
And here at the start of March, following new Fed chief Jerome Powell's first day in the chair before Congress, silver prices have lost 3.1% since New Year 2018.
At the same time however, that same crowd of traders and investors has grown its bullish betting on Comex gold futures and options to well over 3 times its average level of the last decade and more.
Clearly the hot money thinks it knows something. But what? 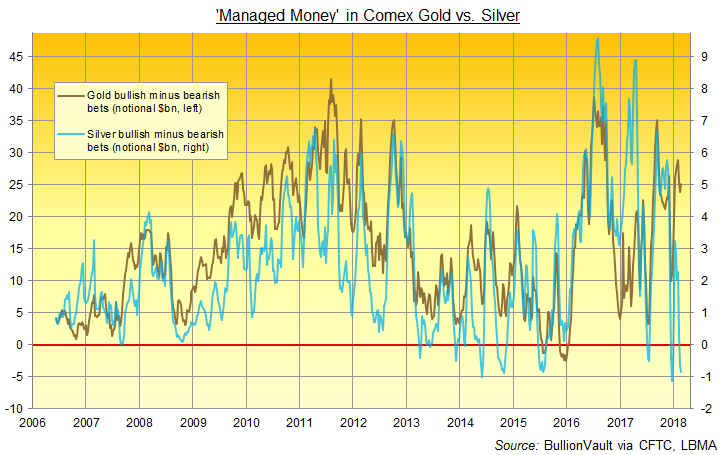 Betting on gold while betting against silver looks a brave call, to say the least.
There's the rub, perhaps. Because in those 11 years when the two precious metals diverged for investors, gold rose 9 times as silver fell. So if you think 2018 falls into that 20% of years when gold and silver move apart, history says yellow beats gray.
Too narrow a pattern to bet on? Trading for cash instead of investing in metal, the 'Managed Money' forms very much the speculative side of the derivatives market, remember.
This is NOT the bullion-bank dealers we're talking about. So whatever your view on the idea of long-term silver-price suppression by bullion banks such as J.P.Morgan, then it does not apply here.
Let's dig into the data on silver investing, and see what facts the hot money might know, what it has missed, and what it (and you) might just choose to toss in the trash.
First, maybe the Managed Money is bearish because it is tracking the vault data now being published by those dreaded London bullion banks.
Those figures say that London's specialist bullion vaults held 1.1 billion ounces of silver at last count. Very nearly 16.0% greater than the stockpile of less than 18 months before, that's equal to some 15 months of global demand.
Bear that in mind next time you read about an impending global "Silver shortage!" on ZeroHedge.
Second however, that extra silver has underpinned a massive rise in physical London trading.
Yes, gold trading has jumped as we reported last week.
But silver trading in London – heart of the world's wholesale market – went nuts at the end of 2017...
...reaching levels not seen in nearly two decades. 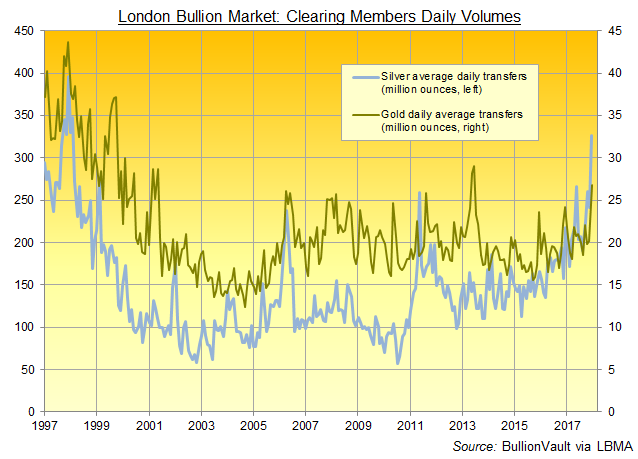 Which way the truly smart money went in the physical market, who can say?
But the big price lows of end-2015 for both gold and silver came on strong London volume, and silver prices have so far risen from the month-average low they hit on December 2017's even stronger volume, too.
Thirdly though, beware the sudden consensus among economists, analysts and fund managers for global economic growth.
Everyone from US financial giant Citigroup to J.P.Morgan...commodities specialists Macquarie...and asset-management giants Blackrock and Fidelity...is now forecasting higher inflation from higher commodities fueled by stronger industrial demand worldwide.
Silver finds strong industrial use. So it must rise, right?
Not quite. Correlation tracks how closely two things move together over a period of time. A reading of +1.0 would mean they went up and down together in lockstep. A reading a -1.0 would mean they moved exactly opposite.
Here's the relationship with US economic output of silver, gold, the stock market, and crude oil.

What to make of this little shock in the data?
Across the last 5 years, industrial users have bought more than half of all the silver sold worldwide. In gold that figure barely touches 10%.
Yet gold shows a closer positive link with US economic output than silver. Neither come close to the obvious connection you might expect with the stock market.
Famously, correlation isn't causation. A seemingly obvious cause doesn't mean correlation either.
No doubt a proper analyst would crunch and re-crunch quarterly as well as annual data. Or you might look instead at the correlations with America's annual rate of GDP growth, rather than the annual total. Because if you did, you'd find silver showing an average +0.28 link to the economy across 5-year periods, stronger even than the stock market and starkly in contrast to gold's -0.10 average correlation across the last half-century.
A serious investor might also want to check when silver's co-movement with GDP was strongest and weakest, especially against other key industrial resources like copper. And wily traders might want to ignore the whole thing anyway. Because if the headlines say "synchronized global growth" then, well, maybe simple investing logic will win in 2018, and silver will rise.
Besides, correlations come and go. There'll be another one along anytime now for Wall Street to trade off.
So fourth in fact, such changing correlations help explain silver's break with gold prices in 2018 so far.
Analysts and traders were surprised by gold failing to fall when bond yields jumped in January and early February. Silver in contrast failed to gain, but that just extended a break with gold that began when Trump won the White House. 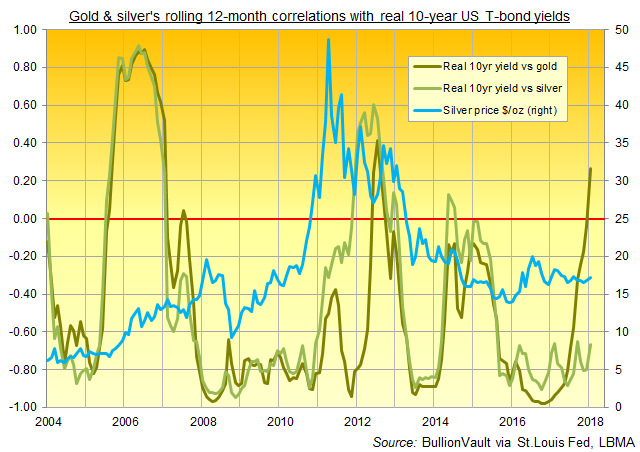 Gold's negative relationship with bond yields has grown much weaker since the end of 2016. Silver, in contrast, held onto its inverse correlation, rising when real rates (adjusted by inflation) went down and falling when they rose.
Is this what the PhD brains plugging algorithms into hedge-fund computers have spotted?
Because finally, this split between gold and silver in how they move versus bond yields is showing in their relative prices.
Silver is touching extreme levels in terms of the yellow precious metal. Extremely cheap. 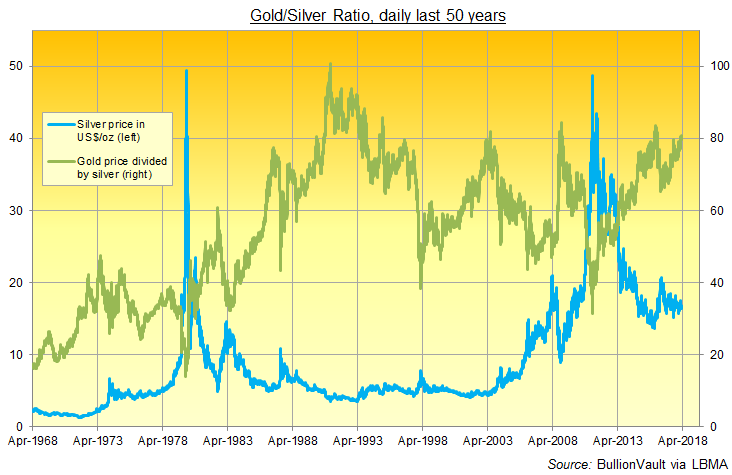 The Gold/Silver Ratio measures how many ounces of silver you could get for one ounce of gold (excluding the dealing costs of selling one to buy the other. Which are very reasonable on BullionVault as it happens).
Last week the Gold/Silver Ratio again touched 81, making gold very nearly as expensive as it has been any time in the last quarter century. Gold's peak above that level was also a real rarity.
Prior to September 1990, gold had never traded at 81 times the price of silver. Not on any historic data that we know of. And it has only breached or traded above that level on 29 days since March 1995.
Now, as a group, hedge funds are betting that gold will rise and silver will fall.
So in effect, they are also betting that the Gold/Silver Ratio will rise further.
Gold up, silver down is their wager.
But what if the ratio falls instead, retreating from its current near-historic levels? Calling a top in gold's price relative to silver doesn't necessarily mean that silver will go up.
But fact is, that is how things have panned out – on a monthly basis at least – some 79% of the time since 1968, back when comparable modern records begin.
When the Gold/Silver Ratio falls, in short, silver prices have tended to rise. And the Gold/Silver Ratio is currently high by any historic measure except the unique period of 1990-1995.
No guarantees and no promises, of course. For some reason, the hot money of leveraged hedge funds is taking very much the opposite bet.