END_OF_DOCUMENT_TOKEN_TO_BE_REPLACED

Demand to invest in silver +7% in 2019 says Metals Focus...
SILVER INVESTING demand has grown for the second year running in 2019, say leading analysts, with investor sentiment towards the metal turning positive as bullion prices have risen.
Global sales of silver investment bars and coins will likely show "healthy gains" and rise 7% across full-year 2019, according to specialist consultancy Metals Focus, reaching their highest since 2016.
But bar and coin demand is "still short of the recent peaks," said Metals Focus director Philip Newman to the Silver Institute's annual dinner in New York on Tuesday, with US investing "historically low" and rising for only the first year in four, while India has seen higher Rupee prices curb a recovery in demand for investment products, especially in rural areas.
Metals Focus' data compiled for the Silver Institute producer-and-user group put 2019's net demand to invest in silver 42% below 2015's peak. 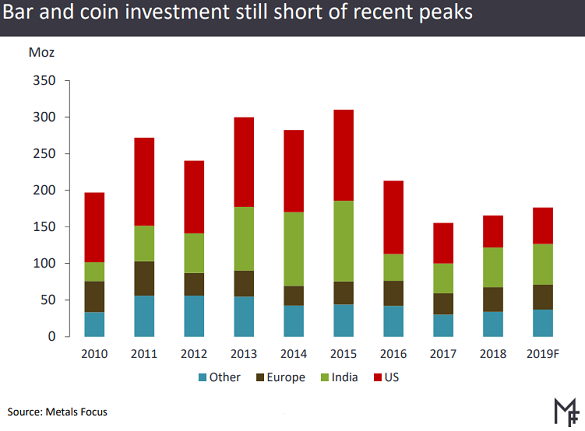 Daily trading volumes in silver contracts have doubled on the Shanghai Gold Exchange this year, peaking at $7.5 billion-worth and overtaking the US Comex derivative exchange's volume.
Sales of silver investment bars and coin from Australia's Perth Mint set the 3rd highest monthly total in at least 7 years in October, according to data tracked by CoinNews.net
2019's growing silver investment demand has come "thanks to improving price expectations and rising price volatility," says Newman at Metals Focus, presenting the consultancy's interim 2019 report.
That's reflected in speculative betting on the metal's price, now "improved noticeably" from the net-negative position seen 5 times over the last 2.5 years.
Silver bullion held to back the value of ETF trust funds meantime popped to new all-time records this summer, tracking the rise in silver prices as gold-backed ETFs also grew to new all-time records as a whole alongside the steep rise in gold prices.
Putting those ETF inflows aside – held in large wholesale silver bars produced to the London Good Delivery standards set by trade body the LBMA – this year's demand for fabricated silver products still lagged global supply, Metals Focus says.
This annual surplus nearly halved from last year's level however, thanks both to solid demand and a forecast drop in mining output. 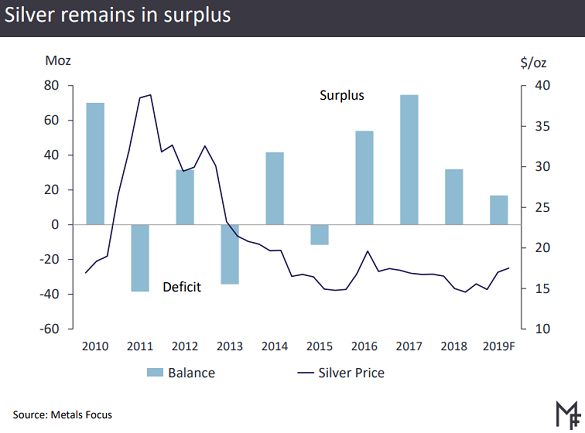 For the second year in a row, silver industrial demand held at a record high on Metals Focus' data, even as the worsening US-China trade war dents electrical and electronic offtake.
Higher trade tariffs and weaker industrial confidence have "taken a toll", with silver use falling notably in major consumer markets the US, Germany and Japan year-on-year.
"[But that] negative impact on silver demand has been mitigated by higher silver loadings [per unit]," says Metals Focus, "especially in the all-important automotive sector as vehicles become
more sophisticated.
"In addition, silver consumption in the photovoltaics sector has also grown as more countries push ahead with renewable energy projects," although annual off-take failed to grow in 2019 as efficiency in solar-energy technology has improved.
Meantime on the supply side, the growth forecast by several mining producers was offset in 2019 by strikes and local protests across South America, Newman told this week's Silver Institute dinner, while 3 major projects – Uchucchacua, Fresnillo and Saucito – all saw lower-than-expected grades of ore.
With recycling flows virtually unchanged for a 5th year running, that meant total market supply fell for yet again from the record peak of 2015, when silver bullion prices bottomed at their lowest this decade, down below $14 per ounce.