END_OF_DOCUMENT_TOKEN_TO_BE_REPLACED

Quick, to the Money-copter! Again...
HAPPY BIRTHDAY to money from thin air! writes Adrian Ash at BullionVault.
Yes, today marks 10 years to the day since the UK began quantitative easing.
Joining the US Fed...which had just joined the Bank of Japan's decade-long campaign...the Bank of England slashed interest rates to a new record low...
...and fired up the printing press (or rather, its electronic equivalent)...
...in a bid to stem the collapse of share prices and boost new bank lending after the global financial crash flipped into crisis.
"World activity continues to weaken," said the Bank, "reflecting both depressed confidence and the persistent problems in international credit markets."
Here in the UK, it went on, "output [has] dropped sharply [on] lower consumer spending [and] a further fall in business investment.
"Unemployment has risen markedly. Credit conditions faced by companies and households remain tight."
Fast forward to March 2019, and the financial crisis feels like another country.
Today finds more people in work than ever before. The stock market has doubled. Household borrowing has recovered its 2009 peak...and set non-stop new records ever since the Brexit referendum.
So why is everyone so gloomy? 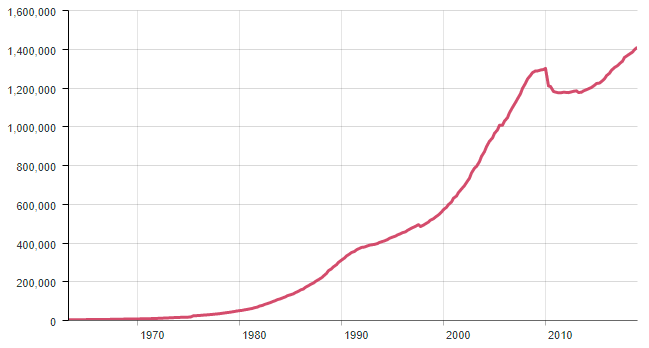 Yes, that's in £ millions...roundabout $1.3m in what pass for 'real' money.
And yes, household debt now pretty much matches the UK's total annual economic output.
But no, the UK still hasn't unwound or cancelled any of the QE money it laughably claimed to be " injecting directly into the economy" rather than revolving between the banks and the Treasury.
So here come the pundits and players with their blinding 'Sherlock' insights...
"Like opium," says a Times' columnist, "quantitative easing has become the medicine that keeps the patient sick."
"Quantitative easing was the father of millennial socialism," adds an economist in the Financial Times, ticking off buzzwords like a shopping list.
Still, these unacknowledged legislators of the world make a fair point. Because where QE led, today's sudden interest in MMT follows.
Here comes the science...
Modern Monetary Theory claims that government, and not the central bank, is the fount of all money.
(It's actually the commercial banks... creating money when they give you a loan. But nevermind.)
Indeed, the government can print and spend all it wants says MMT...without risking disaster...so long as it raises tax if inflation starts to rise.
Put another way, "isn't MMT just an explicit statement of what is already implied by QE?" asks our friend John Stepek at MoneyWeek magazine...
"...that in some circumstances you can monetise deficits to an unknown extent without immediately triggering crippling inflation? Is that a fair understanding of it?"
But hang on: Who said inflation was a risk?
...and who said anything about QE monetising the government's deficit?
Oh that's right. Everyone did back at the time...
...everyone except central bankers and government!
The rationale for QE in 2009 was hard to pin down in 2009. No one had ever tried this in a moden democracy.
But money was being destroyed as banks cancelled debt after creating the biggest credit bubble in history. Unless you want to live in a Mad Max movie, that was apparently a bad thing. Therefore, the central bank could step in...
...create money from nowehere (just like a regular bank, only without taking your home as collateral)...
...and use it to buy things like, surprise! Government debt.
Is that how it worked?
"This policy," says that economist writing in the FT, "[was] designed to protect the balance sheets of the wealthy. [It] has unleashed forces that may lead to the mass appropriation of those assets in the years ahead."
Yeah, yeah, like whatever.
QE was just a new name for an old trick.
Run a big budget deficit. Get the central bank to print money to pay for it.
The name had been invented by academics who, a decade or two later, actually got their hands on the controls at big central banks, most notably Ben Bernanke.
Ben had lots of theory ready in advance, but when QE actually got its moment to happen, it was mostly designed just to do something...anything...to get the financial markets' mess out of the economy.
It kinda worked, maybe. But no one knows how or why or to what extent. We will never know what happened after Lehmans' collapsed without QE.
So meantime back with the academics, new-sounding ideas and theories about how money can be created and controlled have sprung up.
Today's flavour of the month in the senior common room...so-called Modern Monetary Theory...looks quite plainly like the child of QE.
But there's nothing new or modern about it. Printing money to fund government spending has been recommended and tried many, many times before. Not least over the last 10 years.
Japan's central bank, for instance, now owns more assets by value than the world's 3rd largest national economy creates in GDP each year. UK government debt has meantime more than trebled since the financial crisis of 2008-2009.
That's quite something for a nation that's been happily borrowing money from investors since the late 17th Century.
Since 2008, total national debt grew from barely £0.5 trillion to more than £1.7 trillion, most of it bailing out the banks and then funding welfare cheques.
Right alongside, the Bank of England has meantime created £435 billion ex nihilo to buy government bonds.
Where would UK Gilt prices trade without that boost? Where would interest rates stand?
And closer to BullionVault, what about gold?
Check out the US Fed's asset holdings versus gold priced in Dollars for instance. 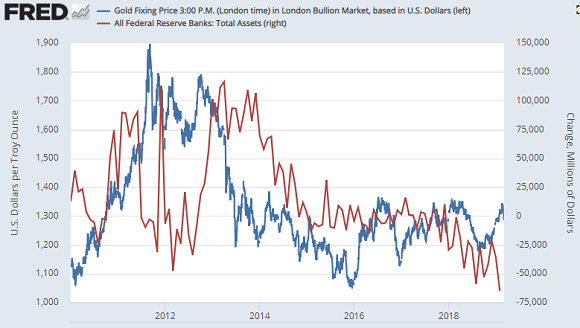 If there's any hard relationship across time, we sure can't see it.
But away from the data...and away from the mechanical maths of this-plus-that-equals-whatever-you-like...let's recall what QE really signalled when it began:
Central bankers had lost control of the markets. They faced an uncontained crisis...and everyone knew it.
As the crisis faded, however, QE apparently showed that central bankers had figured out what to do...and when to do it.
Who needs gold when those guys are in charge? And why bother with bullion today when politicians are actively starting to call for government money printing based on a theory of how money works?