END_OF_DOCUMENT_TOKEN_TO_BE_REPLACED

FCV production set to jump from current 'modest' level...
PLATINUM DEMAND for use in hydrogen fuel cells is set to grow sharply in the 2020s according to industry data and forecasts.
"Technological, legislative and commercial drivers have aligned to make the hydrogen economy viable now," says the latest weekly precious metals note from refining and technology specialists Heraeus.
Platinum is used in fuel cells to spur the chemical reaction of hydrogen with oxygen. This process – first discovered by electrochemistry pioneer Humphry Davy in the early 1800s and famously used to power Nasa's Apollo moon landers in 1969-72 – produces electricity and clean water.
Competing with battery electric vehicles (BEVs) to replace fossil-fuel petrol and diesel power, a modern fuel-cell electric vehicle (FCV) stores hydrogen in a fuel tank before mixing it with oxygen taken from the air.
"Hydrogen is a flexible store of renewable energy," says Heraeus, "helping [power] grid balancing and decarbonisation of energy production." To catalyze the production of electricity in FCVs, it goes on, "several thousand ounces of platinum are used annually and this will grow as the technology is rolled out, potentially exceeding 100,000 ounces per year in the late 2020s."
Growing FCV production will certainly impact platinum-group metal demand by 2030, agreed US auto-giant General Motors' technical specialist Dr.Rahul Mital in his presentation to the London Bullion Market Association's annual conference this autumn.
This additional demand "can easily be met," Heraeus says, because total current platinum use is currently smaller than supply, creating a surplus.
Platinum's No.1 use is currently for catalysts to reduce harmful emissions from diesel engines. Analysts SFA (Oxford) forecast that autocatalyst demand will decline to 2.9 million ounces in 2019. 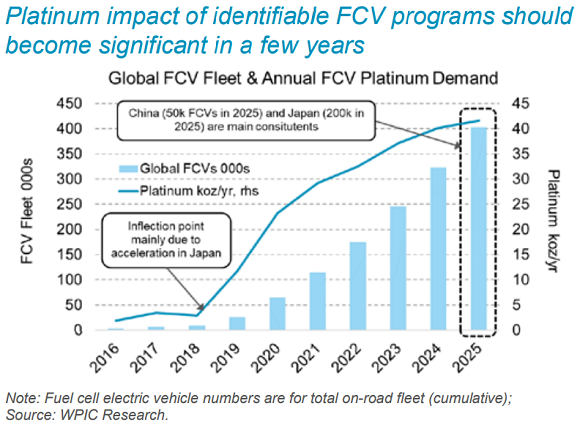 "While FCVs are a small portion of total EVs," says the mining-industry's World Platinum Investment Council, "there is significant upside as infrastructure is built out."
The global FCV fleet currently "remains modest" at some 10,000 vehicles, but that should rise to 400,000 by 2025 says WPIC, combining targets set by and forecasts for California (aiming for zero carbon emissions by 2045), Western Europe, South Korea, Japan (200,000 by 2025) and China (50,000 by 2025, with further growth to 1 million vehicles planned by 2030).
Korean auto-maker Hyundai announced last week that it plans to be producing 500,000 fuel-cell systems for FCVs each year by 2030, part of a $6.7 billion push to "expedite the realization of a hydrogen society."
"FCVs should be included as a new focus" in China, says senior Beijing advisor Wan Gang, vice-chairman of the National Committee of the Chinese People's Political Consultative Conference, "as they boast such features as zero emissions, long driving ranges and short refueling times."
Compared to battery electric vehicles – the dominant 'green' technology for passenger cars so far – FCVs are currently more expensive however. "Scarce H2 refuelling infrastructure is a second challenge," says WPIC, but that headwind is "being addressed gradually [and] favouring FCVs are their significantly faster refuelling time and greater range" than BEVs.
Just 221 hydrogen fuelling stations are already operational across the major auto markets of Australia, China, France, Germany, Japan, South Korea and the United States according to data gathered by Heraeus. By 2025, forecasts industry group the Hydrogen Council, that should rise to more than 1,400.