END_OF_DOCUMENT_TOKEN_TO_BE_REPLACED

Growing demand for platinum catalysts in hydrogen fuel cells...
The UNITED STATES' Fuel Cell and Hydrogen Association has just reached a milestone, says the World Platinum Investment Council in its latest 60 Seconds, celebrating its fifth National Hydrogen and Fuel Cell Day.
Falling on 8 October, in reference to the atomic weight of hydrogen (1.008), the day was officially launched in 2015 to help raise awareness of fuel cell and hydrogen technologies.
Since then, the potential for platinum-based hydrogen fuel cells to provide emissions-free power solutions, especially in the transport sector, has become widely accepted.
Today, momentum is growing as governments, non-government organisations, fuel producers, fuel distributors and automotive companies continue to collaborate on building out the infrastructure needed to support widespread fuel cell electric vehicle (FCEV) adoption.
This includes not only bringing FCEV makes and models to market, but also developing renewable hydrogen sources and hydrogen refuelling stations. Certain regions are advancing plans for FCEVs vigorously, especially Europe, China, Japan, South Korea and, within the US, California.
Underpinning this activity has been the early adoption of FCEVs in the materials handling sector, which has been quick to see the benefits of a technology that combines zero tail-pipe emissions – especially important when working indoors or in sensitive conditions such as food handling – with performance capabilities. 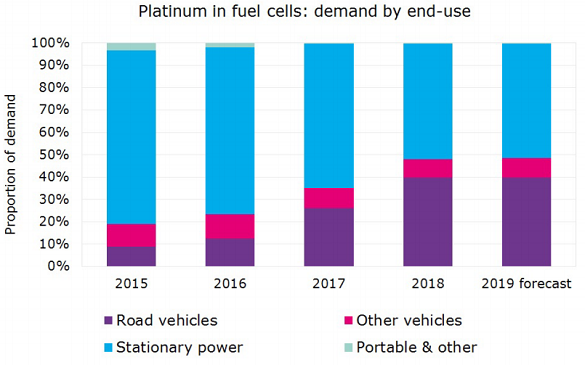 Platinum-based hydrogen FCEV fork-lift trucks are well-established materials handling workhorses that offer commercial advantages in terms of cost benefits and lower capital costs. With an estimated 25,000 currently in use globally, they are widely used in today's state-of-the art distribution centres operated by the likes of Amazon, Walmart and Coca Cola.
These organisations use FCEV fork-lifts due to their sustained high efficiency and fast refuelling, meaning limited downtime, as well as their productivity – up to eight hours of full power is achievable during a shift without the power loss associated with their battery electric predecessors.
Drayage – the transportation of goods over short distances in the ports and logistics industries – is also turning to platinum-based hydrogen FCEVs in a drive to reduce on-road emissions, spurred on by tightening regulations. For example, Toyota has successfully conducted a trial of Class 8 fuel cell trucks at the Port of Los Angeles.
Fuel cells offer other heavy duty vehicles such as city buses and haulage trucks the necessary range and payload capabilities that a battery electric vehicle (BEV) powertrain simply cannot achieve, due to the size and weight of the battery that would be required.
It is anticipated that provision of hydrogen and hydrogen refuelling stations built to serve captive fleets on hub-and-spoke missions, like drayage trucks and city bus fleets, will, over time, accelerate the growth of the framework for wider deployment of hydrogen refuelling infrastructure, especially from major cities and places like ports. This could, in turn, facilitate further growth in market share of FCEVs in other market segments, particularly light duty vehicles.
In China alone it is estimated that there will be at least 50,000 FCEVs on the road by 2025, and one million by 2030 (source: JM PGM Market Report May 2018). Growth in the FCEV market is expected, over the long-term, to have a significant positive impact on platinum demand. In the shorter term, demand growth from captive fleets should set the pace.