END_OF_DOCUMENT_TOKEN_TO_BE_REPLACED

Ermine for idiots, profits for bankers. And for savers? Risk...
EVEN a stopped clock tells the right time twice a day, writes Adrian Ash at BullionVault.
And 10 years ago this week, the minute-hand slowly turned towards a dark midnight which gloomy gold bugs like us had long predicted.
We like to flatter ourselves that we saw it coming. Mostly because we did.
But we take very little pride in it today. Because the coming of the 2007 credit crunch...and the global financial crisis it announced...was plain to see. If only you looked.
Such trends and risk form the ultimate fundamentals of the bullion price, most especially gold. From the lows of 1999-2001 – hit just as the Tech Stock Bubble signed off the late-20th Century's historic hubris – gold had already tripled versus the Dollar, even before the sub-prime crash began to make headlines. Gold's gains came despite no major shift in supply or consumer demand, let alone European central-bank selling. Instead, investment demand had returned after two long decades...a clear sniff of trouble then brewing.
Of course, central bankers and regulators would later claim in the aftermath of the financial crash that no one could predict it. But they couldn't even see the crisis when it was upon them. The buffoons who then mismanaged the bust are still struggling to understand it today, 10 years later.
The most startling example? Blaming the US sub-prime crash for September 2007's banking run on Northern Rock.
"All this stems from problems in the American housing market," claimed the UK's then-Chancellor, the hilariously eyebrow'd Alistair Darling, as he put the nation's taxpayers on the hook to defend the savings and mortgage arrangements of NRK customers amid the country's first banking run since the late-19th Century on Monday 17 September, 2007.
"What's happened is there’s plenty of money in the system, the banks have money, but at the moment the banks are not lending to each other in the way they usually do."
You could almost think this guy knew what he was talking about. But only if you knew even less.
Over the previous half-decade, Northern Rock had regularly topped the UK's 'Best Buy' tables for fixed-rate bonds and deposits. Yet customer savings accounted for only one third of its funding, needed to finance the UK's fastest-growing book of home loans.
Already the country's fifth-largest mortgage lender, Northern Rock grew its net lending to UK residents by 55% over the eight months to August 2007. Driving this break-neck growth was what the financial media politely termed "an alternative banking model": borrowing on the international money markets, rather than using customer deposits.
Yet Northern Rock was far from alone in relying on the credit of strangers. Nor was this 'model' in itself new. Short-term money-market loans had helped giddy-up the Lawson Boom of the mid-to-late 1980s. Known in dusty old textbooks as the "funding gap", the shortfall between customer deposits and banking loans then shot higher as New Labour's Gordon Brown split up UK regulation, urged home-ownership on anyone with a pulse, and oversaw the 'carpetbagging' frenzy of demutualising boring building societies into go-getting, stockmarket-listed banks.
Over the first decade of the 21st century, this "footloose" finance helped the gap bewteen UK bank deposits and UK bank lending surge to a massive £800bn at the top...fully 56% of the UK's entire annual GDP as the nation scrambled to start saving money and paying down debt amid the end-2008 global crisis. 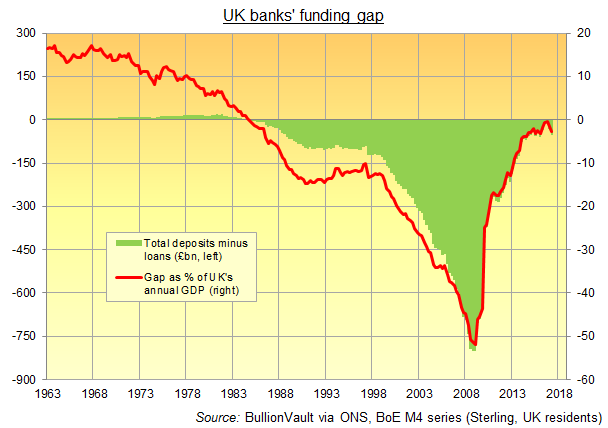 As the chart shows, the idea that "nobody could see it coming" was and remains laughable. These data were and are published each month by the Bank of England. Why bother if no-one downloads them?
Northern Rock was just the riskiest of many high-risk balance-sheets. And so it became, logically enough, the first major UK institution to crash. But rescuing its depositors, and therefore giving its shareholders a little breathing space to phone their brokers before finally nationalizing the damned thing 5 months later, therefore didn't make so much sense. Especially not after Bank of England boss Mervyn King had railed against moral hazard only days before.
This same confused routine of tough-love-kid-gloves would see the sharpest global economic contraction since WW2 strike even as the US authorities rescued AIG thirteen months later. Because they let Lehman Bros. fail at the very same time.
Which was it – reckoning or rescue?
Back on 14 September 2007, the fifth largest bank in the world's (then) fifth largest economy had clearly been the UK's most reckless lender in the reckless global lending bubble. Rather than sticking with the rules then in place however – with every deposit guaranteed up to £35,000 and then a proportion above that – the increasingly old-looking New Labour panicked that weekend, finally promising on the following Monday (and with another £2bn withdrawn by retail depositors) that every last penny in Northern Rock was safe, trying to stem the panic over a month after NRK's model hit the rocks, almost a week after its short-term creditors had fled, and 5 days after it had turned to the Bank of England for an emergency loan.
But, well, you know, the UK's chief finance minister himself did have a mortgage with NRK, if not a conflict of interest. And today his brass-neck claims that "quick" action is the model of bold policy to follow.
Naturally, Alistair Darling has since been ennobled. Gongs have also gone, outside the terrible two-some of Tony Blair and Gordon Brown, to the other political enablers of Britain's financial bubble and bust: Mervyn King, Paul Myners, Howard Davies, Callum McCarthy, Adair Turner...
But the real prizes, if not knighthoods and ermine, went of course to the bankers. Bailed out with taxpayers' cash by the very government and regulators in charge as their reckless lending went ape, they got to keep their profits, bonuses and pensions...booked the moment their trades were executed, even if they still had years to settle.
Since 2007 it has remained fashionable to moan about " privatized profits but socialized losses", just so long as you ignore the catastrophe which letting household depositors burn would have created. Yet few people have noticed the other great transfer...again from banks, onto the shoulders of private individuals like you and me...following the financial crisis which broke 10 years ago:

As Northern Rock's desperate advert offering 6.3% on bank savings showed – printed the day before its crisis finally reached a journalist's desk – any rate of return paid on cash savings means you are being compensated for taking some risk...whether of time, missed opportunity or possible capital loss.
Yes, that includes bank deposits, as first UK and then US, Icelandic and finally Eurozone savers learned between 2007 and 2013. And yes, the risk of capital loss...thanks to your bank failing...is what banking deposit insurance has sought to erase since the 1930s' Great Depression.
Governments everywhere responded to the dark midnight of 2007-2009 by confirming and proclaiming the safety of bank deposit insurance. Never again will widows, orphans or anyone else holding less than a pretty tidy sum...such as €100,000 say...have to fear any risk of their bank failing.
But with that risk eliminated by government diktat, the outcome for interest rates on your savings also now looks obvious in hindsight.
Zero risk = zero return. Which forces anyone and everyone hoping to grow or defend the real, inflation-adjusted value of their money to take risk elsewhere.
Bitcoin, high-yield junk, all-time record highs in the US stock market...none of these things rely on borrowed money today anything like the banking bubble did a decade ago.
That's because this bubbling financial-price boom isn't a debt bubble. It is a bubble in money itself...guaranteed safe by the government but therefore unable to attract any interest and so pushed out to seek risk like never before.
Quite where or when this will find its pin, I don't pretend to know. Maybe in China's $9 trillion bond market. Maybe in Australia's liars' loans of 2017. Maybe in the terrible financial (not to mention human) costs of Harvey and Irma. Or maybe when the City and Wall Street finally wake up to the threat of Korean nuclear war.
All anyone can guess for now is that this relentless bull run in the price of every 'asset' will crash in the end. Even precious metals are likely to suffer at first, thanks to the air gushing out of credit derivatives.
But when the profits people wished they had booked start to fly away...evaporating from crypto-currency, high-yield debt, real estate and equities...many will rush to lock their wealth into a big, heavy box somewhere safe behind a big heavy door in the form of physical, vaulted bullion.
They did a decade ago. They always do in a true financial crisis.
Acting early has tended to pay best. And not having to join the rush can even make financial crises fun to watch.