END_OF_DOCUMENT_TOKEN_TO_BE_REPLACED

Few things are more unnerving than a reassured politician…

Sage words no doubt, from the man who first forecast that UK banks would hit trouble in...erm…late 2007, writes Adrian Ash at BullionVault.

Now, again, Cable thinks the crash will come in banking...and he thinks it will come due to a lack of regulation.

"The political class as a whole is not preparing the public for how massive the problem is. There is not the recognition, to my mind, of the seriousness of the problem."

But what's this? In the same breath, the ex-economist adds:

"We don't have an underlying inflation problem."

"As an outsider looking in, I take the view of the doves," Cable told Bloomberg back in February. "Although you have inflation, it's almost entirely imported. There's not very much evidence of British inflation taking place."

In fact, he claimed, "It's virtually deflation."

No, minister. It really isn't. Not in the cost of living. Deflation is only hitting real incomes. And only because we really do have an inflation problem.

Retail prices – excluding housing – rose an average 6.3% annually in the last 3 months. That's the fastest pace since Spring 1992. Twenty years ago, however, UK interest rates were at 10%. They're now down at 0.5%, and have been stuck there for well over two years.

The net result? For anyone not buying house today (which as Vince Cable knows, means pretty much everyone right now) it's the sharpest loss of purchasing power in cash savings since Jan. 1978. Worse still, average earnings are rising at barely one-third the pace of inflation, growing by just 2.3% year on year.

Still, never mind. "The Bank [of England]'s job, as the governor keeps pointing out, is not to look at today's numbers, but to look 18 months ahead," as Cable told the New Statesman this week. And of course, the Bank of England – stuck at near-zero – says inflation will fall back. Just like it's said inflation will fall back for the last 18 months.

"I find that reassuring," says the Business Secretary. 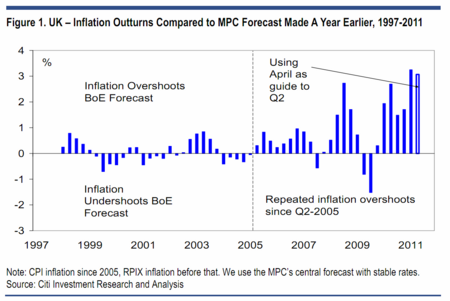 Oops! The Bank's record at forecasting inflation even a year hence is growing ever worse, as Peter Hoskin at The Spectator notes, citing this chart from Citi.

Because somehow, the famous "output gap" keeps failing to put a lid on prices, even though unemployment is rising, growth has evaporated, and consumer credit and spending continue to flatline.

How come? What could possibly be driving prices higher in the absence of booming demand? Without the legendary "second-round effects" of inflationary wage claims, why on earth would the value of money be falling at its fastest pace – even on the official figures – for nearly two decades?

To quote Vince Cable, there is not the recognition of the seriousness of the problem.