END_OF_DOCUMENT_TOKEN_TO_BE_REPLACED

IF GOLD'S GOING UP, then gold-miner stocks will rise further and faster. Right? 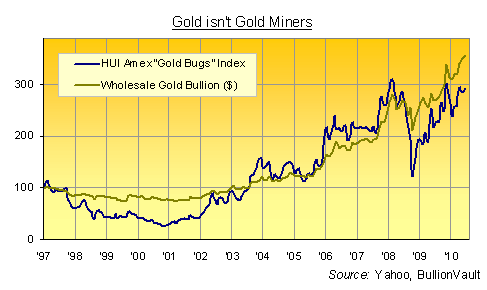 "Gold mining stocks [are] a more risky but more profitable way to invest in gold," says Alix Steel at TheStreet.com in New York.

"Gold Bullion is defense. On the offensive side," agrees Charles Oliver of Sprott Asset Management in Toronto, "if you want capital gains, [you want] gold stocks.

"We're in a bull market in gold and, generally speaking, most of the time Gold Mining stocks will outperform bullion."

Thing is, that period of time – "most" of it, according to Sprott's Oliver – sits oddly inside the last 10 years of rising gold prices. TV football pundits would call it a game of two halves (football being a game of foot and ball, of course, rather than helmets, armor and cheerleaders).

Because over the first half of the bull market to date, Gold Mining stocks far outperformed the metal. Over the second half, in contrast, Gold has matched and then beaten both the leading gold-equity funds and stocks, on average – and with significantly lower volatility, too.

Take from this what you will, but between 2000 and 2005, gold priced in Dollars rose 55%. The HUI index of 16 leading US-listed mining stocks added 195% (excluding dividends). Tocqueville Asset Management's Gold Fund rose 190% by value.

But the apparent "leverage" to gold for which producers and actively-managed funds are recommended has evaporated over the second half of gold's 21st century bull run so far. More telling still, it's actually worked against gold equities and funds amid the financial crisis' greatest points of stress. 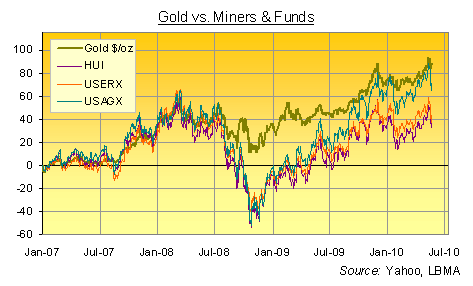 "When you buy or track the underlying metal – rather than investing in producer stocks – you don't get management risk, political risk, corporate tax, permitting risks and so on," said ETFSecurities' Scott Thompson this week.

You could say he was talking his book. (So are we here at BullionVault, naturally.) But what you do get when you buy gold – and what isn't offered by mining stocks or actively-managed mining-stock funds – is just a lump of metal, used to defend and store value, almost universally, for perhaps 7,000 years or more. That rare, shiny lump is as far as you can get from the growth-driven aims of most financial analysts and journalists today. Despite the worst recession and loss of global investment wealth since the 1930s, they'll still look for growth – and juiced-up profits – even from an unyielding lump of gold.

How much further might gold stocks and gold diverge from here? It might well depend on just how much deflation – capital destruction and "negative growth" – still lies ahead.

How best to Buy Gold today...? Keep it simple, secure and cost-effective by using world No.1 BullionVault...