END_OF_DOCUMENT_TOKEN_TO_BE_REPLACED

'Buy the rumor, sell the news' applies to all markets, not least the price of borrowing Dollars...

"EVEN THE CASUAL OBSERVER can have no doubt that FOMC decisions move asset prices, including equity prices," noted Ben Bernanke, now chairman of the Federal Reserve's Open Market Committee, in a speech of Oct. 2003.

Together with Alan Greenspan, he certainly helped move US equity prices during the Great Reflation of 2002-2005. They also giddy-upped the price of pretty much everything else, too.

Starting of course with real estate inside the United States, and commodity prices everywhere else.

After those two bull markets crashed into each other to create the global credit crunch in July 2007, Bernanke then got busy moving Euros, crude oil and Gold – slashing the cost (and therefore the value) of Dollars for eight months on the trot.

But as this week's slump in the three "anti-Dollars" now shows, mis-reading the Fed can move asset prices as well. "Buy the rumor, sell the news" applies to all markets.

Not least when all markets expect a double-quick replay of the 1% rates reached in Sept. 2003. 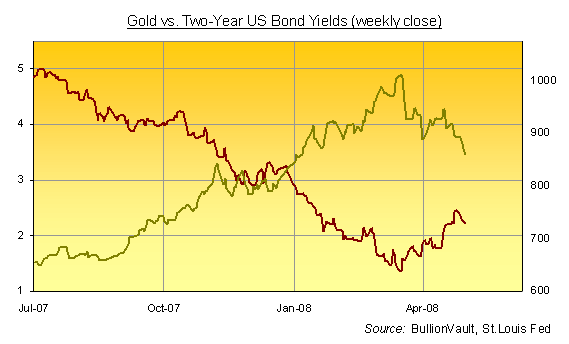 Even before this week's disappointment for oil bulls and currency traders, the one-way bet of lower bond yields had already slammed into the buffers in mid-March.

So too had the 57% surge in Gold Prices.

March 17th marked the top (for the time being, if not for good) in both bond prices and gold. Like oil and the Euro today, they look to have got a little ahead of themselves. Both bond yields and Gold Prices now stand as though the first four months of 2008 never happened.

Which isn't to say one or other might not push onwards again. But that Monday in March came straight after Bear Stearns was bailed out for $2...and then $10...per share. Ben Bernanke delivered $30 billion in loans to support J.P.Morgan's acquisition as well.

He'd already called three unscheduled Fed meetings to show the world how he'd tackle the looming threat of recession. And the following day – March 18th – would see the FOMC meet and announce yet another interest-rate cut. In the end, it delivered an out-sized 0.75% cut for good measure.

But the problem for bond bulls and gold buyers, however, was second-guessing that cut. "Everyone wants to know how bad [the crisis] is going to get," as one Frankfurt-based analyst put it. "Will banks recover this year or will the crisis stay with us for longer?

Coming after the fastest Fed rate-cutting since the start of the '80s, a full 1.00% certainly couldn't be ruled out. Because after 225 points of Fed "easing", the stock market still refused to revive.

But interest-rate futures "have been an accurate predictor" of recent Fed policy, as Daniel Collins now notes in Futures magazine. And interest-rate futures in mid-March were skewed for a "mere" 0.75% drop. The median forecast from 101 analysts surveyed by Bloomberg came in at that level, too.

Priced for their own "perfect storms", the bond and Gold Markets in contrast – even if expecting deflation and inflation respectively – were both getting ahead of themselves. 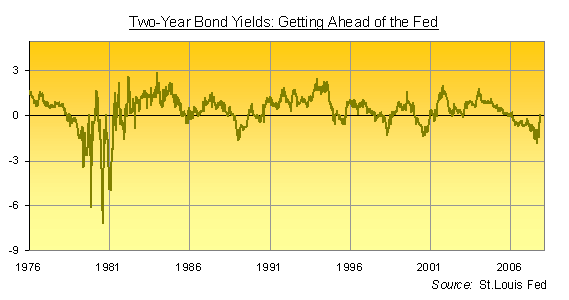 Gold famously broke $1,000 an ounce, making headlines the world over before slumping 15% by the first day of May. And not since the monetary mayhem of the early 1980s had bond buyers been so out-of-step with US central-bank policy.

By the FOMC's mid-March decision, two-year US bond yields were running ahead of the Fed by 184 basis points, a 27-year record. As the chart shows, bond buyers have since sat out the market, waiting for the Fed to catch up instead.

"Based on the prices of distant Fed Funds contracts," Daniel Collins goes on, "this [latest cut on April 30th] will be the last rate cut of the current easing cycle. The Fed will begin tightening rates beginning with a quarter percent increase at the October or December meeting."

But looking at the economic data instead, might the bond market be mis-reading the Fed again?

"The record of the seven post-WWII recession/recovery cycles is that the Fed doesn't tighten until after the unemployment rate has peaked," noted Paul McCulley in his Fed Focus for Pimco – the world's biggest bond fund manager – in Dec. 2001. As a rule, he went on, the peak in US unemployment comes "some six months after the manufacturing sector has troughed."

During its last rate-cutting campaign, however, the Fed went one better. It didn't stop cutting rates until US unemployment peaked at 6.3% in June 2003; that same month, growth in manufacturing output finally bottomed at 0% year-on-year.

Then the Fed kept the cost of borrowing Dollars at just 1.00% for a full 12 months. By which time, in July 2004, unemployment had fallen back to its post-WWII average, and US manufacturing was growing by 3.1% annually – just above its own average of the last 35 years.

"The Fed won't start raising interest rates until the unemployment rate has peaked and started coming back down," reckons Mark Zandi, head of Moody's Economy.com. He believes US unemployment – currently at 5.1% – will climb to 6% before it starts slipping back at the start of 2009.

It's also worth noting that in March of this year, US manufacturing growth fell to barely 1.7%. And as for the Fed's impact on asset prices, "it would be good to remember that the best predictor of Fed activity over the last year has been the equity markets," Daniel Collins continues in Futures magazine.

"When the Dow has dropped, the Fed has come riding to the rescue. And if the economy officially falls into recession – which may already be the case – and equity markets retreat, there will be a great chorus of voices from Wall Street calling for additional easing."

Under Ben Bernanke, "the current Fed has no experience thus far in disappointing those voices," Collins concludes. It's unlikely to play party-pooper, in short, if the crowd starts baying for more gin 'n' juice.

No matter what that does to Euros, crude oil, Treasuries and Gold.