END_OF_DOCUMENT_TOKEN_TO_BE_REPLACED

As China's household savings have surged, its Gold Investment has surged faster still...

CHINA REMAINS A FARAWAY COUNTRY of which we know little. The Isle of Wight, on the other hand, is a small island two miles off the English south coast where my mother-in-law lives.

"Spend! Spend! Spend!" remained their grim cry this Bank Holiday weekend, despite the death of cheap credit, liars loans and self-cert improvement mortgages. Margaret Thatcher screwed their parents' state pensions; now they're getting screwed by her answer. Company schemes are falling short, the FTSE hasn't budged in 12 years, and annuity rates are so low, you need a lump sum of £300,000 – some half-a-million dollars – to retire in poverty.

All told, or so runs the thinking (my wife's mom excepted), you're better off having nothing to lose. Because you'll lose whatever you've got when it comes times to buy care...now averaging £25,000 per year ($41,000). "They make you sell your home before they'll cover the costs." So why bother owning your home?

One in three UK pensioners still has a mortgage outstanding, says CreditAction.org, each owing more than twice the average national salary. Nearly one-in-ten of their offspring has to help support them, as well...earning the nifty name of "sandwich generation" from The Telegraph and sitting ugly between spendthrift parents and iPhone-fixated kids.

Whereas in China...? While those "rich" Westerners spend, China's one-billion souls save, putting aside a massive 20% of gross domestic product since 1998. That ratio rose to 24% in 2008, according to Louis Kuijs at the World Bank in Beijing.

Yes, the personal savings rate varies from city to farm, reaching perhaps 50% in central Beijing. High-income families save proportionately more as well, says Kuijs. "Rich people save a lot more and their numbers have increased," he told The Economist recently. But in aggregate – which is all Mr.Market cares about – the world's most populous and fastest-growing economy likes to save for the future.

China's private citizens put aside $3 trillion in the decade to Jan. 2009. So too did its corporations. Beijing is hell-bent on mobilizing this aggregate hoard of $6 trillion (see Galloping Consumption Part I), but it couldn't all stay in cash. Hence the Shanghai stock market's repeated surges and troughs, as new money pours in and panics. Hence the bubble in low-quality loans, as China's banks seek a return on deposits. Hence a surprise for the gold market, too.

"Evidence suggests that, as economies develop, the range of spending and investing options expands considerably," guessed an analyst at a major UK bank back in 2004. "This helps to explain why...in the competition for growing Chinese disposable incomes, gold is very quickly losing market share.

"Given that China’s economic development is likely to continue and the growing global influence of Western culture (which tends to be negative for gold), we can expect China’s income spend on gold to continue to decline."

But no. Not quite. As we said, China is a faraway place... 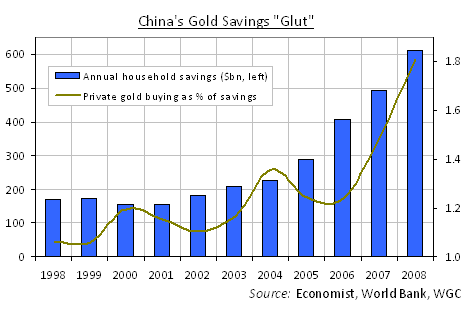 Much was made of the China overtaking South Africa as the world's No.1 gold-mining producer in 2008. More still was made of the surge reported this spring in China's official gold reserves, up 75% by weight in six years to 1,054 tonnes.

Worth $32 billion, however, that lump of metal badly lagged growth in the People's Bank's total reserves. Thanks to Asia's "savings glut" – otherwise known as the West's "galloping consumption" – the PBoC's hoard of foreign currencies swelled by more than 300% to over $1.7 trillion. More crucially for China's post-communist wealth, official Chinese gold holdings have lagged jewelry and investment buying by Chinese consumers...now totaling $42bn since 1998. 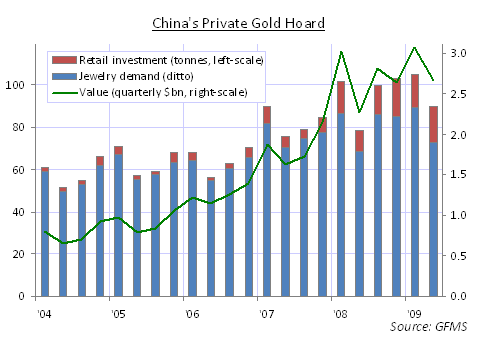 According to World Bank estimates, annual household savings in China have risen three times over in the last 10 years. That's a four-fold rise in US Dollar terms.

Annual private gold buying meantime doubled in tonnage (according to GFMS, mainland China data), rising five-fold in Chinese Yuan and rising six times over in US-Dollar terms. So as a percentage of annual household savings, private gold purchases rose from just over 1% to more than 1.8% in 2008...defying Western-analyst forecasts for "consumer substitution" as disposable income and thus savings grew.

Put another way, growth in the value of private gold purchases has consistently outstripped China's GDP growth every year since 2001, when retail-price controls were abolished. Come the first-half of 2009, private gold buying in China overtook India to become the world's No.1 market. It grew 8.1% in tonnage from the same period in 2008, rose 6.4% in Yuan value, and grew more than 8% in Dollar terms.

China's galloping gold buying wasn't simply a function of the global turnaround in gold's fortunes, either. As a proportion of all retail buying worldwide (covering what GFMS separates into "jewelry" and "retail investment", although we're not sure the distinction applies), Chinese demand more than doubled from 7.5% in 2004 to almost 16% in 2008. It reached 31% between Jan. and end-June this year.

Still, as Martin Wolf of the Financial Times asks – pretty much summarizing the Western position – "Does it make sense for China to save so much or, for that matter, to invest so much? Higher consumption today would surely be desirable."

So too, no doubt, would less Gold Investment. Deemed "socially useless" during the last global depression, it hardly makes sense even to gold-market analysts at the West's biggest banks. Whereas in China, that rare unchanging metal – used for 5,000 years to store value – only grows in appeal as the economy grows, threatening to tip into a credit inflation or blow-out deflation thanks to the current surge in government spending and commercial-bank lending. "Low levels of gold ownership reflect a long period of price and import controls," reckons the World Gold Council. "Despite a long-standing cultural affinity to the precious metal, most Chinese consumers are still in the process of accumulating their holdings."

Yes, the World Gold Council would say that, wouldn't it? It is, after all, a marketing group funded by 28 of the world's big Gold Mining firms. But out of the aggregate, a Hong Kong-born analyst long-since living in England I met early this summer perhaps shows just how deep China's faith in gold may run.

"I'm not a gold investor," he told me bluntly during our open discussion, dismissing gold over stocks or fixed-income assets. Chatting later, however, he breezily mentioned that he'd just got back from Hong Kong, where he'd bought a heavy gold chain as a birthday gift for his son – "to own, not to wear."

He and his wife had also bought gold for themselves, adding to their bank-deposit box stash of 24-carat jewelry on their return to London...

Looking to Buy Gold today? Make it cheaper, safer and quicker to trade than either jewelry or coins...without losing the crisis insurance of physical ownership...at BullionVault