END_OF_DOCUMENT_TOKEN_TO_BE_REPLACED

Signs of a top in everything, even gold...

REMEMBER when today's record-breaking uptrend in stocks and shares was the "least loved bull market" in history? asks Adrian Ash at BullionVault, talking to Weekly Update subscribers back on Monday, before this week's market trouble got started.

That's what many analysts, traders and pundits called the upturn in US equities starting at the depths of the global financial crisis...

While the stock market bounced and moved sharply higher after the Lehman's crash, most people worried that the crisis was about to crush equities once more, and they kept doubting that the new bull market could keep running.

But "Wall Street is no longer the bastion of free and open markets," said one gloomster of the Least Loved Bull Market a few years later.

"Instead, market prices are determined by political appointees, called central bankers, who pull the monetary levers behind the scenes."

Maybe so. The latest flood of cheap and free money has coincided with the US stock market reaching its most expensive since the peak of the DotCom Bubble in terms of share prices versus the earnings actually being made by those companies.

The rest of the world is catching up. It hasn't been this pricey since the DotCom Bubble crashed either. 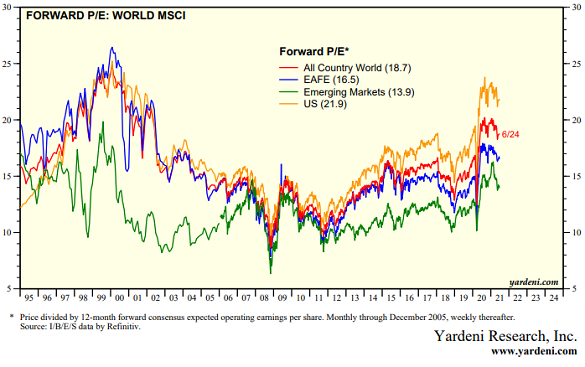 But who needs earnings anyway?

Well over a third of US-listed corporations currently make less than they spend every year.

A record 80% of 2020's new stock-market listings came from companies making a loss.

And with investors no longer bothering to look for actual profits in the companies they buy, the S&P500 index of US corporations has now risen 6 times over since the 2009 low...

...surging past its previous all-time peaks, even amid the Covid pandemic and lockdowns...

Seven of them came in the last 7 working days.

So today's 4th of July holiday looks like a well deserved rest for the bulls.

It also comes against a backdrop of unbridled bullishness.

"In such an environment, it is difficult to imagine a very negative scenario for equities."

Hard to disagree. Not even the deflationary shock of 2020 could derail this bull market.

Maybe it's because reality...and real stuff...simply matters much less in our tech-driven world than it used to. 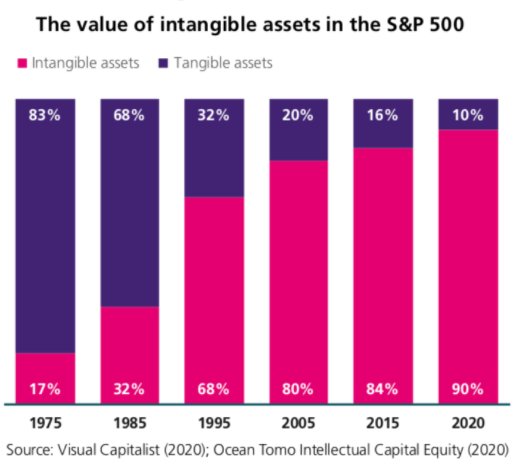 "50 years ago," notes a pundit on Twitter, "a company's value was overwhelmingly derived from its physical capital...

"...the assembly lines & buildings it owned, and the products it made.

"Is that caused in part by tax-driven accounting sleight-of-hand?" someone else asks.

Again, hard to disagree. But old habits die hard, even here at software and fintech pioneers BullionVault (where real stuff really does matter of course).

Oh sure, detailed analysis might say there's nothing to worry about in today's fresh all-time stock market highs.

But we still find the world littered with signs and signals that walk, talk and dance just like a big ugly stock-market top...

...from cheerleaders punting "AMC to the moon!" at Spring Break pool parties...

...to trading app Robinhood preparing to float itself on the stock market...

...while the big-brain bosses of America's hottest stocks fall over each other to be the first billionaire in space...

No wonder the UK's Financial Conduct Authority wants to do away with boring old rules as it tries to attract more hot stocks to float here in London.

No wonder US regulators at the SEC are throwing both cheerleaders and Robinhood's famous confetti drops into their new consumer-advice adverts.

"I had no idea investing regularly could add up this much," says an actor in one SEC advert, missing yet mocking the meme-stock mania.

"I had no idea it was that easy to diversify my portfolio," says another.

Big deal. Who needs to diversify when stocks and shares just keep rising?

Both have now risen around 50 times from their value 50 years ago. 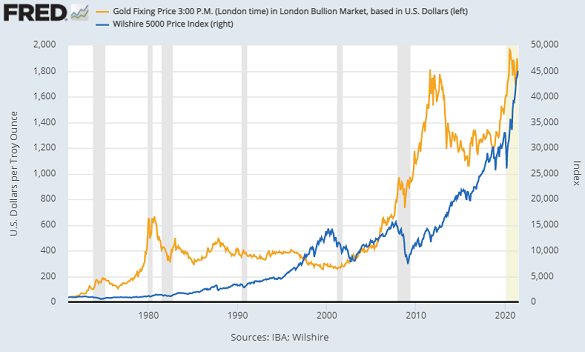 So what about our own little corner of the market?

Central-bank money printing should, at first glance, be just as good for bullion as it is for the stock market.

So the interest-rate rises and QE tapering now being discussed thanks to 2021's jump to 3-decade highs for inflation would very likely hit gold and silver prices just as badly as the stock market too.

And if you want a 'top of the gold market' signal to go with the stock-market top, how about the return of the much-missed gold ATM...?

"Well-heeled Munich residents can now get their gold supplies from a vending machine at Promenadeplatz," says German newspaper Süddeutsche Zeitung.

Pulling small gold bars out of cash-point first made headlines back at the top of gold's first 21st Century bull market in 2009-2011.

Sucked in by its PR success, several operators tried to make this "Gold To Go" idea work over the following few years as well, but again without success.

Now it's back and winning headlines all over again.

Gold is often promoted as the ultimate inflation defence. And across the last half-century of free-floating currencies and precious metals, it has indeed tended to rise faster when the cost of living moved sharply higher than when inflation was quiet.

Most dramatically it surged during the inflationary 1970s...

...rising 9-fold in real inflation-adjusted terms for US savers even as the cost of living doubled across that decade.

But gold has also proven to be a very reliable stock market hedge as well...

Since the early 1970s in fact, and looking at 5-year returns, gold priced in the Dollar has risen 98.0% of the time that the S&P500 index has fallen from a half-decade before.

No, past performance is no guarantee of future returns. But a 98% strike rate across 5 decades of data is worth a look. And if you can't (or won't) guess where the stock market might be trading in 2026, then owning a little more (or less) gold as a hedge looks to me like a very sensible thing to consider.

No, spreading your risk is not exciting, and it almost certainly means you will miss out on making the maximum possible gains compared with putting 100% of your eggs into the one basket which then proves the most profitable.

But how can you guess which basket that will be?

We diversify because, while we cannot know the future, we know we will want to avoid having had our savings wiped out before we get there.