END_OF_DOCUMENT_TOKEN_TO_BE_REPLACED

Listen closely enough, and hear the sense in these noisy prices...

Nor do they choose to buy at the lowest costs using our service because we believe (or pretend to believe) that some kind of millennial event is about to strike the gold and silver market...again, any day now!...freeing prices for a historic surge.

You can, if you wish, find such ideas splashed all across the internet elsewhere. And if you choose to act on them, you will simply find that BullionVault is safer, cheaper and easier than any other route to acquiring physical metal and owning it outright, entirely off-risk for credit default or settlement risk.

For what it's worth, our big picture simply sees a good time to own bullion...and a good time to own less. Only you can decide which is which for your own savings. Because no one else can possibly share your motivation to get it right.

But whatever the weather, it always makes sense...we think...to hold some physical gold or silver in reserve against the storms to come. Because you never can tell.

Still, if I suddenly turned dramatically bullish...urging you to sell your house, stocks, bonds, furniture and family in exchange for precious metals...BullionVault users would be right to wonder if we'd finally given in to the bear market running since 2011. Because it would smack of trying the same old marketing schtick as a thousand other retail investment providers (all of them, by the way, smaller than our business).

As it is, no – we won't do that today. And business has in truth been good so far in 2015. Net gold demand on BullionVault is 80% ahead of 2014. Silver demand is 20% up. But that aside, we should note yet another handful of straws in the wind.

First, the last couple of weeks have seen a good rally. Gold at $1160 and silver back at $16 are making some technical analysts squint at their price charts again.

"Is this year's downtrend about to be broken?" they wonder.

Yes, silver is still around its cheapest price in 6 years. Gold remains near half-decade lows. But the stuff is so cheap, one metals factory in Serbia is trying to pay its staff in gold, rather than cash. Because after 4 years of slump, the company has more metal than money, and stands on the brink of bankruptcy.

Not quite capitulation perhaps. But if the market cycle must hurt consumers at the top, it must hurt producers at the lows. And the mining sector's pain is plain.

Yes, gold imports to the huge Indian market may be down...but if demand is so sluggish, how come smuggling continues, exploiting the gap between retail prices and heavily-taxed inflows?

What's more, the Western media – and many industry professionals – are now utterly bearish, even when price action improves. No one rings a bell at big turning points. But this is the mirror-image of the bullishness seen at the tops of 2011-2012. And weirdly, demand for ETF trust-fund products has actually ebbed back as prices have rallied. So this turn (if that's what it proves) is coming quietly, with hardly anyone noticing.

Sure, if you try hard enough, you'll find the odd glimmer of hope-over-experience amongst some tip-sheets, as always. And yes, you'll find some newspapers giving a little space to monetary reformers, urging a "return to gold" completely at odds with the political and central-bank establishment.

That establishment isn't listening. It is ploughing on regardless...fighting the economic cycle by racing back to discredited 20th century theories of how the world works...and rushing straight from inflation targeting to monetarism and now all-out Keynesian borrow-and-spending.

Odds are (according to our patented Irony school of history) this cycle in theories will eventually push further back...to a Gold Standard...one day. That day isn't now.

With hindsight meantime, the last 4 years have of course been a good time to own a little more of other assets instead. Equities. Bonds. Real estate. Gold in contrast has dropped 35% since 2011. Silver prices have sunk up to 65% for Euro investors, and lost 70% for UK and US savers daring to trade "the devil's metal".

Who on earth would buy this stuff now? And what trader wouldn't want to sell it short...betting that prices will fall further and harder? Well in fact, last week's gains come AFTER the short squeeze which hit bearish traders...and sent prices jumping as they dashed to close their positions...on the shockingly weak US jobs data of the Friday before. 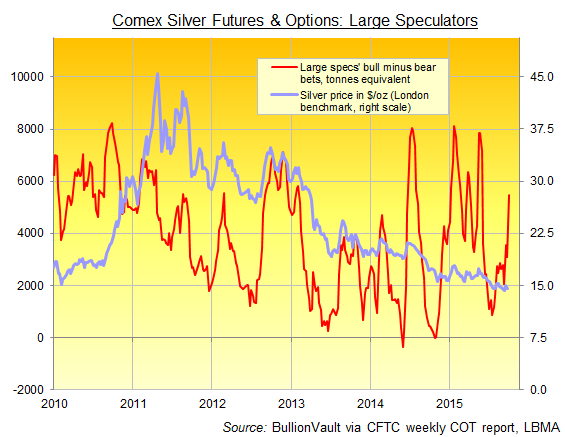 Whatever has buoyed prices around these current levels, it hasn't been more short covering. Because the bears got squeezed out already. So something else is going on. And now the US Fed's minutes of its September meeting...when it decided to leave interest rates unchanged at 0%...show that Janet Yellen's team voted 9-to-1 to delay "lift off" yet again.

Only one hand was raised in favour of raising rates from zero. The Fed blew its chance. Now one other Fed member says it should think about negative rates instead!

No wonder the stock market is now cheering cheap money forever once more. Maybe, just maybe, gold and silver prices have very quietly started to warn against it again. And as Sunday Times' columnist Ian Cowie notes – writing very much against the grain:

"It is worth keeping an eye on bullion – especially when it is out of the limelight. History says that might be the time when gold is about to shine."