END_OF_DOCUMENT_TOKEN_TO_BE_REPLACED

Yield curve inverts, yet US confidence jumps...
WHO's right about the US economy, asks Adrian Ash at BullionVault.
Consumers or the bond market?
Gold and silver investors might well wonder.
Because US consumer confidence just jumped to decade-high levels.
Yet the bond market in contrast says recession lies dead-ahead.
Precious metals look caught in the middle.
Gold is struggling to find direction around $1280. Silver prices are struggling not to set fresh 2019 lows with a drop below $14.30 per ounce.
So will US consumers or the US bond market prove wrong?
Or will both of these signals prove correct?
Because with short-term US rates now higher than long-term rates, history says that today's inverted yield curve foresees an economic recession sometime in the next 2 years.
Consumer confidence, on the other hand, is rarely higher than just before the economy tanks, marked here by the gray bars. 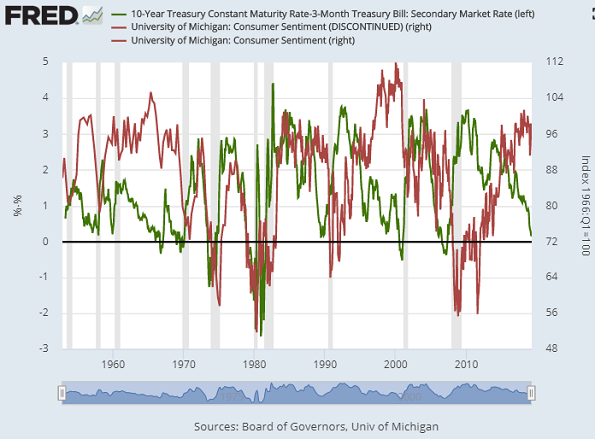 Forget the trade war with China, the proxy war with Iran, or the worsening culture wars between pretty much everyone with a social media handle.
US households haven't felt this positive since New Year 2004 if you look at the University of Michigan's survey...
...or the year 2000 if they answered the Conference Board's latest survey.
If you won't share this optimism, you can at least understand it.
Blue skies, plain sailing. Right?
Now contrast the bond market.
There, investors are piling into the safe embrace of long-term US Treasury bonds...
...driving up prices...
...and so driving down the annual rate of interest they'll accept on 10-year debt to the lowest since September 2017.
Uncle Sam's short-term debt has also caught a bid, but it's nothing like longer-term Treasuries.
So while the 10-year now offers a yield of just 2.22%, the 3-month bill offers an annualized rate of 2.34%.
That up-ends the normal shape of the yield curve. Because longer-term loans usually pay a higher rate of interest.
Now they don't. 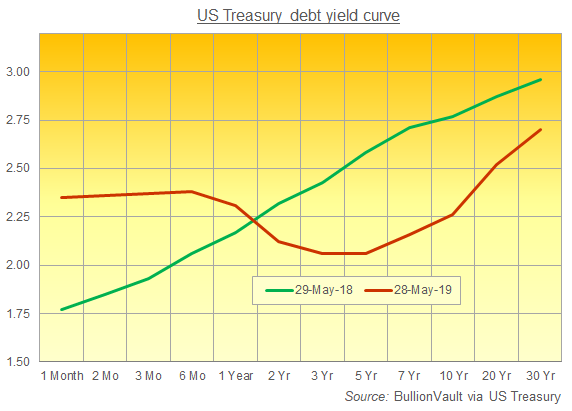 What gives?
Step forwards the New York branch of the Federal Reserve:

"Research beginning in the late 1980s documents the empirical regularity that the slope of the yield curve is a reliable predictor of future real economic activity.
"Today, a substantial body of evidence exists..."

Put another way, as a research paper from NYFed staff did last year:

"The term spread, the spread between the yield on a long maturity bond and a short maturity bond, has been shown to have strong predictive power for future recessions...[because] when the term spread is particularly compressed [ie, the gap is zero or less] this tends to be associated with a recession in the subsequent 2-8 quarters."

Where does the bond market get these powers of prophecy?
Over the last 65 years, the annual yield offered by 10-year Treasury bonds has exceeded the annualized rate on 3-month T-bills by an average of 1.47 percentage points.
That looks a fair reward for the extra time you'll wait for Washington to repay the debt. Longer-term lenders risk both inflation and the lost opportunity of putting their money somewhere else.
That average 'term spread' of 1.47 points has been pulled and squashed inbetween of course.
But it shrank near zero or below just before each of the last 9 recessions in the United States...
...and today it sits compressed to -0.12...
...the lowest reading since spring 2007 marked the eve of the worst financial and economic crisis since the Great Depression of the 1930s.
Right or wrong in 2019, this signals that the bond market thinks short-term interest are higher than they should or will be in future.
Betting in the futures market says the same.
Speculators now put just a 1-in-7 chance on the Fed not cutting its key interest rate before the end of this year.
And if you glance back above at the yield curve chart, you can maybe see who to blame and who failed too. President Trump sure can.
The Federal Reserve under Jerome Powell has raised short-term rates 3 times over the past year. That pushed up borrowing costs on the left of our chart.
But despite cutting its holdings of longer-term bonds however, the Fed has failed to push longer yields higher. Indeed, the market has now priced in a rate cut from 2.96% to 2.70% on the 30-year bond since this point in May 2018.
Yet the Fed has meantime cut its total assets by 10%, primarily by letting go of the longer-term Treasury bonds it hoovered up to drive long-term rates lower during the global financial crisis.
That 'normalization' has done squat to normalize long-term bond yields.
So-called 'quantitative tightening' hasn't done much for gold or silver prices either. Nor has the yield-curve inversion. Yet.
More to come in Part 2...