END_OF_DOCUMENT_TOKEN_TO_BE_REPLACED

And recession coming to the US by 2021...
WHAT really drives gold prices? asks Adrian Ash at BullionVault.
"Nobody really understands gold prices," claimed then US Federal Reserve chairman Ben Bernanke in mid-2013, "and I don't pretend to understand them either."
But seeing how gold prices were sinking at the time in their worst slump for 3 decades, he might have taken a guess.
Today's gold investors certainly think Bernanke could've tried harder.
One-in-three believe geopolitics will be the biggest single driver of precious metals markets between now and New Year in fact...
...and very nearly as many think monetary policy – the words and actions of central banks led by, well, the Federal Reserve – will prove most important. 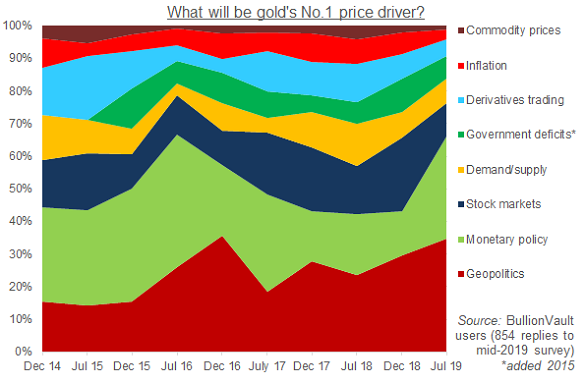 BullionVault's latest survey of its users pulled 854 responses.
That's a respectable sample for any opinion poll...
...and it's huge for this strictly qualified niche of genuine precious-metal investors.
So the results from BullionVault's July 2019 survey offer a better guide to what private individuals investing in gold, silver and platinum are thinking than you'll find anywhere else.
And what they're thinking this summer is that gold prices have further to run after H1 2019's sustained run towards multi-year highs.
Gold has risen 14% so far in 2019, driven both by the worsening US-China trade war and by the sudden promise of interest-rate cuts and a return to QE by central banks worldwide.
Today's mix of geopolitical tension with monetary inflation makes a compelling case for investors to buy gold. The backdrop for further gains looks strong, even with gold now just 5% below its 2011 peak in Sterling terms and 7% below the 2012 top in Euro terms.
Back with Bernanke meantime, his comments from 2013 bear reviewing again.
Because the Bernanke Fed itself was then talking up the approach of a 'taper' to its huge monthly Quantitative Easing program...
...with a rise to interest rates from the post-crisis low of 0% set to follow.
Six years and nine rate hikes later, gold has jumped back to 2013 levels in mid-2019 as today's Fed, now under Jerome Powell, says it's about to start slashing rates again...
...no doubt with a return to QE money creation close behind. (Net QE since Bernanke denied knowing how gold prices worked has totaled $315 billion, after the Fed first added another $1 trillion, then unwound two-thirds of a trillion with 'quantitative tightening'.)
More QE is already on the cards for the 19-nation Eurozone according to Bernanke's contemporary Mario Draghi, still President for another 3 months at the ECB across the Atlantic in Frankfurt.
And that will surely spur yet more angry tweets demanding the Fed slash rates and restart its Dollar QE program from US commander-in-chief, President Donald Trump.
"I suppose that one reason gold prices are lower," said the 2013 Fed chief, "is that people [were] less concerned about extreme outcomes, and therefore they feel less need for whatever protection gold affords.
"The gold price going down is not necessarily a bad thing from that perspective. It suggests people have somewhat more confidence."
Whereas here in 2019, gold prices are rising, and private investors using BullionVault feel the metal has much further to go, driven firstly by geopolitics and secondly by central-bank policy.
So to reverse Bernanke's comment, the gold price going up is most likely a bad thing for policymakers. It suggests people are losing confidence.
And while gold prices tend to do well when other assets fall, the metal does best when people lose faith in policy makers led of course by the US Federal Reserve.