END_OF_DOCUMENT_TOKEN_TO_BE_REPLACED

So the daily correlation data say at least...
SO APPARENTLY, the latest pop and retreat in gold prices has all been about the nuclear stand-off between the US and North Korea, writes Adrian Ash at BullionVault.
"Gold falls on rising risk appetite as N.Korea tensions ease," says Reuters. And fair enough.
Trump hasn't tweeted any fresh threats since Friday...and Kim hasn't yet fired missiles towards Guam.
The gold price today has meantime slipped almost $20 per ounce from last weekend's peak, hit by racing up to re-try the April and June 2017 tops at $1295 per ounce – a move widely reported as driven by last week's explosion of risk and rhetoric between Washington and Pyongyang.
But as we never tire of boringly reminding people, gold bullion tends to offer financial insurance, not a geopolitical tin-hat.
Most especially, gold tends to rise over extended periods when the stock market does badly (and vice versa). Shorter-term, it mirrors the path of real interest rates – meaning the rate of return offered on cash or bonds over and above inflation.
If cash in the bank pays less than inflation, then physical gold bullion – the oldest, most tightly supplied and indestructible form of savings in history – becomes more attractive. If real rates jump far above the cost of living, who needs zero-yielding gold?
What matters isn't the absolute level of real rates so much as the direction of travel. And while you can't miss the "nuclear risk drives gold prices up and down" headlines and narrative right now, bullion has in truth become more about real rates than ever before over the near 15 years of best data available. 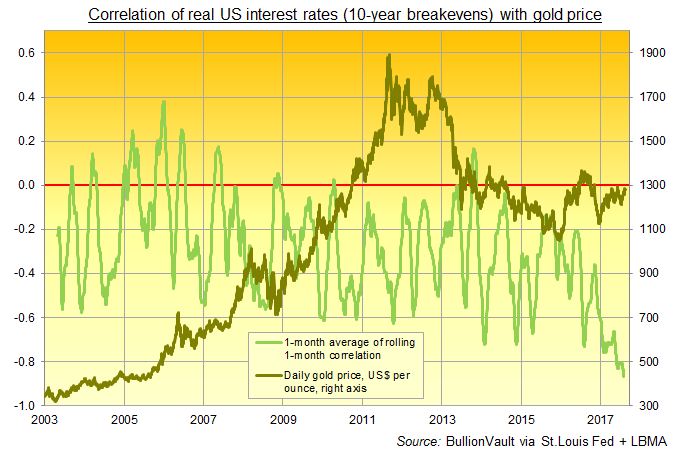 Any two asset prices...or any two data series in fact...may of course display a close relationship without any actual connection.
Correlation does not equal causation. And based on data alone, margarine sales across the US used to track divorce rates in Maine, for instance. Per person cheese consumption beween 2000 and 2009 almost exactly tracked the number of people who died after getting entangled in their bedsheets, found the same fun-with-numbers author, Tyler Vigen.
But a bit like how the billions of Dollars spent on science, space and technology in the US correlated with the number of suicides by hanging, strangulation or suffocation, those two numbers might just be going up independently – say, thanks to underlying trends in disposable income, cost inflation and population all rising, most especially on just 10 data points showing annual readings over a 10-year survey.
The chart above, in contrast, looks at the co-movement of gold prices and real 10-year bond yields day-by-day. And while the decade to end-2012 saw the gold price display an average correlation with real US rates of -0.24, it has shown a correlation of -0.41 over the last 5 years.
That number would be +1.0 if gold and real rates moved perfectly in lock-step together day-by-day on a rolling 1-month basis. It would read -1.0 if they showed a perfectly negative correlation.
Last week the correlation fell to a series of new all-time lows, hitting -0.92 just as the Pyongyan-nuclear crisis kicked up a gear. Sure, that added tension might explain why real US bond yields fell, what with Uncle Sam's debt apparently offering another "safe haven" alongside gold, the Yen and the Swis Franc. Higher bond prices meant they offered a lower yield to new buyers, and so by extension – even if you believed the false absurdity that gold prices move solely in reponse to real rates – that would still put Kim Jon-Un back in the frame as gold promoter in chief.
Clearing out some of the noise however, and averaging the 1-month correlation across one month as our chart does above, shows gold becoming ever-more inversely related to the direction of real US bond yields.
Maybe this is self-fulfilling. Maybe algorithms at hedge funds and investment banks the world over are now primed to buy or sell gold in response to what's happening to bonds (or more likely, gold futures contracts with no metal involved).
But it does give the lie to your newspaper sub-editor, friendly local coin dealer, and bullion-bank pundit all claiming that a) North Korea drove gold prices up, and so b) the lack of nuclear follow-through now makes gold a sell.
Whatever drives the wider financial markets, it's how the world of money and finance respond which counts for gold prices.
Still, the strongly positive correlation between the number of people who drowned after falling into a pool with the number of films Nicolas Cage starred in between 1999 and 2009...
...well, that's a real puzzler.