END_OF_DOCUMENT_TOKEN_TO_BE_REPLACED

4 reasons why LBMA Forecast winner sees gold prices rising in 2017...
GOLD PRICE gains of 8% across last year as a daily average will be repeated in 2017 according to 2016's winning analyst in the annual LBMA Forecast competition.
This 2017 gold price forecast stands in stark contrast to the other 22 participants in trade body the London Bullion Market Association's new report, with the year predicted to deliver a 0.5% drop on average.
Joni Teves at Swiss investment and bullion bank UBS won the 2016 competition by forecasting a 5.6% gain while the average prediction saw a 5% drop for daily gold prices in Dollar terms.
"We see a continuation of the strategic move into gold," said Teves at the LBMA's offices on Monday, now predicting a rise from last year's $1251 to a 4-year annual average high of $1350 per ounce in 2017, and giving 4 key reasons for UBS's view that wealth managers and larger portfolios will extend last year's return to gold investing.
"We think further gains in gold are likely," Teves explains in the new LBMA survey of analyst forecasts, "driven by a continuation of strategic portfolio allocation from a diverse set of investors." 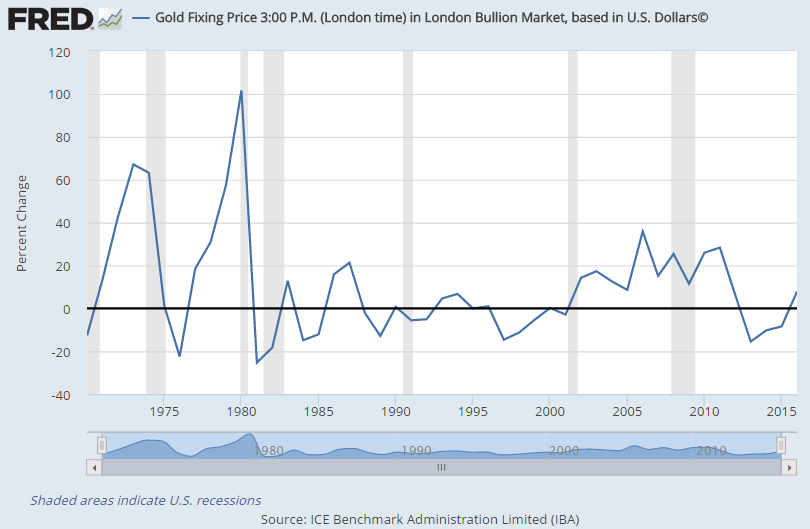 Moderating a debate yesterday between Teves and 2015 gold winner Bernard Dahdah of French bank Natixis, analysts are "generally bullish for 2017" compared with the recent 11-month lows said David Jollie, market analysis manager for platinum-group metals at AngloAmerican Plc (LON:AAL).
But while the annual average forecast for 2017 comes just below last year's out-turn at $1251 per ounce, the consensus view sees "an especially wide range" between gold's high and low prices ahead, Jollie noted, "reflecting the geopolitical risks."
Across the LBMA survey, support for 2017 gold prices is likely to coming from "buying on dips" (Robin Bhar, SocGen, $1150); as a "risk hedge" (Jonathan Butler, Mitsubishi, $1205); "negative real interest rates" (Philip Klapwijk, Precious Metals Insights, $1288); "limited mine supply and recycling [plus] central bank purchases" (James Steel HSBC, New York, $1282); and also "increased political and geopolitical [creating] more market volatility" (Frederic Panizzutti, MKS, $1272).
"As gold is playing a more important role in Chinese personal wealth management," says Kun Shen at Bank of China, Beijing ($1300), "we think Chinese demand for gold will be higher in 2017, lending continuous support to the gold price."
Weighing against a 2017 rise in gold prices however, "We expect Fed rate hikes to have the biggest impact," says Dahdah at Natixis, predicting 3 interest-rate rises from the US central bank and following his bearish call for last year by forecasting an 11.3% drop to $1110 per ounce.
"Ensuing outflows from physically-backed ETPs are expected to weigh on prices," Dahdah says, explaining at Monday's debate with Teves that while "geopolitical tensions and uncertainties" could support the metal short-term, such events as the two Gulf Wars, the Paris terror attacks of November 2015 and the 7/7 bombings in London rarely have any long-term impact.
"Geopolitical factors have rarely tended to affect gold prices and then only temporarily," agrees 5-times LBMA gold price forecast winner Philip Klapwijk, now at independent consultancy Precious Metals Insights in Hong Kong ($1288) and the joint top gold forecaster in the history of the contest with Ross Norman, now at retail dealer Sharps Pixley (at $1310 for 2017, the second most bullish forecaster behind Teves at UBS).
"[But] this paradigm is likely to be tested under President Trump...at a time of rising tensions in Asia and Europe [and] Russian revanchism.
"Overall...gold is certain to benefit from the return to a less benign state of international affairs."