END_OF_DOCUMENT_TOKEN_TO_BE_REPLACED

1 table + 4 more gold charts as silver 'n platinum catch up...
SO DOESN'T gold need a pause? asks Adrian Ash in Part 2 of BullionVault's summer 2019 catch-up.
Will the stock market bounce if not rally? Can interest rates and yields really go lower from here? And when-oh-when will silver and platinum catch up with gold?
Those precious metals are finally trying to follow, with first silver and now platinum racing higher as August huffs and puffs towards its close.
But this week's leap still leaves silver prices at only 2.5-year highs as gold tries new 6-year peaks in Dollar terms...
...while platinum prices have so far reached only 15-month highs.
How come? Fact is, the hot-hot summer of 2019 has seen the hot money get much hotter in gold than in silver or especially platinum. Quite lost its head, in fact...
...betting on a new all-time record value of more than $42 billion in gold contracts according to last week's data...
...but only punting on $4bn-worth of silver...
...a figure beaten 65 times before on US regulator the CFTC's weekly data...
...with the all-time peak (of August 2016) nearly twice as large. 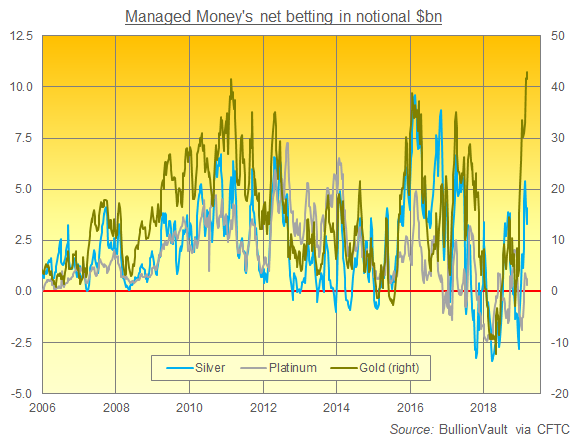 Rarely has this got so out of whack. The snapback might prove just as dramatic for short-term traders wishing they'd bought gold before its summer surge began.
Thirteen years of data say gold has never enjoyed such heavy betting from hedge funds and other 'Managed Money' speculators on Comex futures and options...
...whereas, on last week's data, that group's bullish bets on silver (net of their bearish betting) was 57% below the 2016 peak...
...and platinum got barely 4% of the speculative froth it enjoyed at the peak of Managed Money net betting in early 2013.
Re-alignment might seem overdue, and first silver and then platinum's sudden jumps might suggest its arrival.
Gold is meantime pausing after pushing higher yet again this week, extending its pretty much non-stop run of Friday-to-Friday gains since June even against the almighty US Dollar.
The last quarter-century of history says gold should really be struggling right now, because the Dollar is proving so mighty. But no. 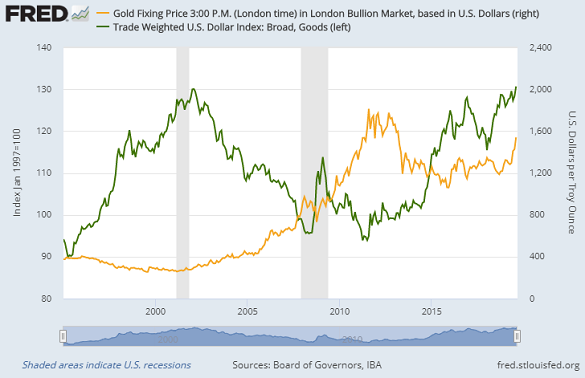 Something has changed, at least for now, and gold has proved pretty much the only thing the US Fed and its Fed-hating President have been able to devalue against.
Hence gold's new all-time record highs for Eurozone, UK, Indian, Australian and millions of other investors and savers worldwide.
Hence the "Gold bull market!" headlines pretty much everywhere outside TMZ and – ummm – The Economist. Because gold has even reached, breached but edged back to what chart-obsessed analysts might take for strong resistance against the US currency, sitting somewhere between $1525 and $1535.
Here lies the ill-fated support gold enjoyed between its (current) all-time Dollar peak of September 2011 at $1920 and its historic $1 trillion crash of spring 2013, leading to this decade's low-point (so far) at $1045. 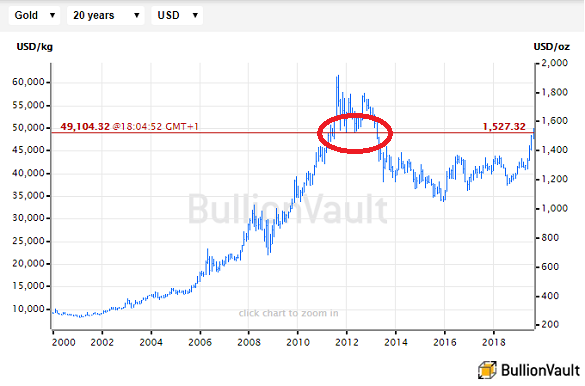 If you need a quick narrative for your next "Gold bull market!" blog or news-wire story, gold prices are rising (or currently slipping) as world stock markets tip lower (but now rally), with equity investors apparently failing to take comfort from (but loving for the moment) all the chatter about easier monetary policy from China plus the global turn to big government spending to try and avert recession, not least in Germany.
Indeed, bond markets are now "begging" for governments to borrow big and spend even bigger (or so Bloomberg claims) on big projects like roads, rail and the like.
Private investors and savers should have long feared this move, right since gold prices bottomed at the end of 2015 in fact, when we first heard the sound of the money-copters firing up...
...ready to follow Quantitative Easing with direct money drops onto the equity markets, the housing market, and the general public at large.
As for interest rates however, the switch from raising to cutting which began last Christmas will soon take short-term rates back to zero in Frankfurt, London and – in due course, no doubt – Washington.
But that still won't be low enough according to the bond market. 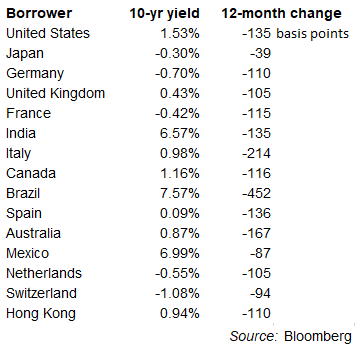 Over $17 trillion-worth of tradable debt – one-third of the total worldwide – has now been bid up so high in price that it pays less than zero in annual interest.
Investors are, in other words, paying to lend the borrower money. And not just government borrowers either.
Outside of US markets, some 45% of all corporate debt rated 'investment grade' now carries a negative yield. German kitchen-to-factory-to-transport tech giant Siemens just raised 2-year money at a negative cost of 0.3% per annum. In July, payments processor Worldline raised €600m in 7-year convertible bonds for which lenders paid it nearly 7.0% upfront.
This, by any measure, is insane. It's very damaging for the banking sector too. Because banks live or die by how much money they can take off borrowers versus how much they must pay lenders.
And right now, the borrowers are costing money while the lenders (meaning you, me, and anyone else with a little cash in the bank) are yet to start paying to save money.
No doubt we all will, and soon. Because here in late-summer 2019, Jyske Bank in Denmark is now offering a mortgage which effectively pays the borrower an annual return of 0.5%.
US bank Europac is meantime charging customers 0.60% per year on Euro balances greater than €100,000. Swiss giant UBS is cutting its limit from €1 million (introduced as far back as 2017 in fact) down to €500,000 before charging that same negative rate.
Owning physical gold, in contrast – which unlike a bond or currency cannot go bust and cannot be created at will – costs as little as one-fifth that much, just 0.12% per year using BullionVault.
As it is, and pending that happy day when all savers must pay to keep their cash in the bank, US bank Wells Fargo last week cut its stock-market price targets for more than a dozen competitors, saying "there is no way to sugar coat" what lower rates will do the sector's earnings.
Donald Trump himself meantime held a call with big bank CEOs during mid-August's stock market plunge...
...no doubt promising that he'll make the Federal Reserve cut rates faster...
...and thus missing the point entirely.
So finally, the stock market. Or as it's risk becoming known as 2019 crawls to its end, the House of Suckers. 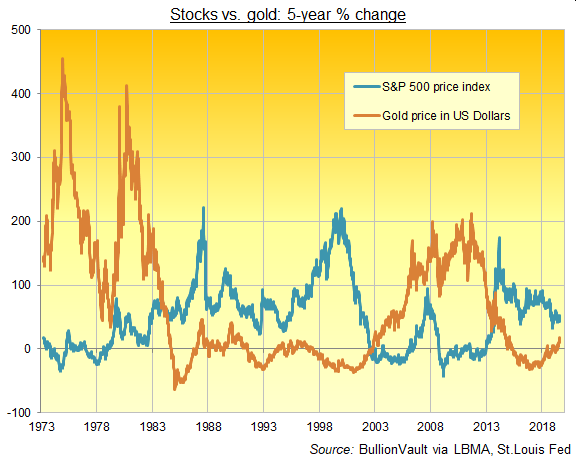 Shortly before leaving Brexit Britain for a summer break, we shared with BullionVault users reading our Weekly Update emails all the latest news on the madness in tech company IPOs...
...brought to market with massive and unfixable losses by private-equity owners desperate to get some kind of return before the music stops...
...and therefore offered to eager stock-market investors wanting to get into the hot deals they've missed out on as private-equity took over as the market's favourite gaming table.
Now, after TheRealReal, we have the IPO proposal from hot-desk loss-maker WeWork.
Everyone who looks at this thing says it's a dog.
Because it is spending nearly $2 for every $1 its customers pay. Or so the limited set of numbers it will deign to share with investors suggest.
But so what? Who cares whether WeWork is actually working?
"We are a community company committed to maximum global impact," says the ridiculous prospectus from the back-of-a-napkin idea masquerading as a business calling itself The We Company.
"Our mission is to elevate the world's consciousness."
Fuelled by that kind of helium...if not laughing gas...maybe this bubble can get a little higher yet. Especially with central banks chasing bond markets to cut rates even further below zero...
...as wealth managers beg governments to flip from half-hearted austerity to very sincere deficit spending.
Maybe a stock market bounce, if it can push beyond Labor Day and into September, will give savers and investors a chance to buy precious metals for insurance a little lower down.
But if summer 2019 offers any lesson to would-be gold buyers in future, you might need to take your chance when you get it.
Because waiting for a big dip has proven a forlorn hope so far in what the bullion price, plus the surge of investing demand, say is a new bull market in gold.