END_OF_DOCUMENT_TOKEN_TO_BE_REPLACED

Because there's so much else to see...
COULD gold investing get any more boring, Boring, BORING...? asks Adrian Ash at BullionVault.
Only if it doesn't get any more painful short-term perhaps.
The yellow metal nearly sent traders to sleep over the first 5 months of 2018...
...trading in its tightest price range since the early 1970s.
All it has done since then is lose another $50 per ounce...
...giving up its latest assault on the $1300 level.
Lucky for pundits however, gold investing is never about the metal.
Gold doesn't pay any interest or post any quarterly numbers. Barely one-tenth of annual demand comes from industrial use.
Gold does so little in fact, it can't even rust.
So for investors trying to decide which way they think prices will go, gold is really about everything else.
Think of it as the ultimate 'Zen' investment. To figure out gold, look away from the metal and meditate on everything else.
And away from the bullion market right now, you'll find plenty to think on.

The Donald's not wrong.
Things could hardly get any better.
US consumer sentiment, for instance, has only been this high twice before on the University of Michigan's survey series. 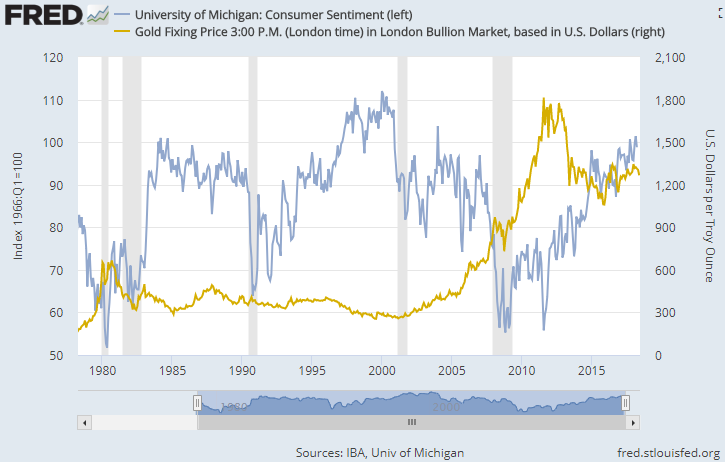 Last time people were this jolly was briefly in 2004...just as the housing bubble neared its peak.
Before that was across the last 3 years of the 20th Century...back when the DotCom Bubble peaked and central banks everywhere started selling their gold reserves.
Claims for US jobless benefits are meantime setting new 44-year lows...
...and gasoline demand in the US has never been higher.
Here in the UK a similar story.
More people are now in work than ever before.
Spending at the shops leapt last month. People are so positive, demand for garden furniture and barbecues is surging in Scotland!
It's not just private households who see only blue sky and sun-kissed evenings ahead.
Wall Street is lending cheap money to US corporations like 2008 never happened.
Lending worldwide has in fact now jumped to new all-time records...
...with more money owed than ever before.
That in itself isn't a problem. People need credit for all kinds of sound reasons.
To build a family and a home. To start a business. To expand their output and marketing.
But problems start if they cannot make the repayments.
And this new-record mountain of debt has been built using the lowest interest rates in history.
The margin for error, in other words, has never been smaller. Borrowers have needed the cheapest loans in history to make the sums work.
Household incomes, meantime, have struggled to get ahead of even the tame inflation being reported by official government data.
Total income in the UK, adjusted for the cost of living, is now lower than it was 10 years ago.
Real wages in the US first reached current levels more than 3 years ago.
And out of that income, the amount of money people are saving for the future has collapsed both in the US, sinking back to 2005's record lows...just before the housing bust turned into the global banking crisis.
The real trouble, however, is building in those corporate debt markets.
Because while US businesses have raised new record levels of debt, they have also enjoyed record-high corporate earnings.
Those earnings are now trying to plateau if not retreat. And after a near 10-year bull market in stocks – and the third longest recession-free economic run in US history – 2018's record-high equities look priced for perfection with very little room for manoeuvre.
The pin for this bubble?
Rising interest rates are the usual suspects. Most of the world is trying to keep a lid on the cost of borrowing, but the US Fed looks set to keep raising the cost of borrowing Dollars.
The immediate pain is already hitting emerging-economy nations.
Over-borrowed and over-reliant on foreign funds, they are now stuck trying to boost growth with cheap money at home, while trying to defend their fast-falling currencies on the foreign exchange market.
A global 'trade war' certainly won't help. It will also hurt developed-world nations as well...
...forcing them to try and keep boosting domestic demand with cheap money while the No.1 source of all liquidity slowly tightens the tap.
So when will the Fed stop?
Raising interest rates is being sold as a sign that economic growth can now look after itself, because consumers and business need less support from the central bank. Inflation is also rising, or so all the indicators are flashing.
But the world is priced to rely on near-zero rates. So removing that support is unlikely to end well for borrowers, never mind their lenders.
Judging by every US recession of the last 60 years, the Fed won't pause until right before the economy goes into reverse...
...and it starts slashing interest rates again to try and stem the recession.
Buying gold bullion or other precious metals isn't guaranteed to get you through that downturn when it comes. Not even the immutable metal is sure to do well in the economic and financial chaos to which the US Fed is now booking our tickets.
But physical bullion is very unlikely to stay boring.
Least of all when other investors realise just how much they could lose when this debt bubble bursts, and borrowers stop repaying their loans.