END_OF_DOCUMENT_TOKEN_TO_BE_REPLACED

Gold worked in all but 11 of the last 549 times investors needed it to...
SO MAYBE this plunge in the stock market finally marks the top, says Adrian Ash at BullionVault.
If so, the Federal Reserve will wonder how it burst the bubble it did so much to inflate, simply by saying it doesn't worry one bit about creating bubbles and how it  will never raise interest rates ever again.
That;s because until this week's Fed policy and forecast release, apparently nothing could stop the stock market from surging. Nothing.
Not trade sanctions thrown at each other by the US and China...the world's top 2 economies and trading partners. They didn't manage it last year.
Nor Iran and the US throwing missiles at each other in January.
Nor a virus so virulent it started killing people on every continent but Antarctica inside 3 months of appearing in China since then...
...or the sharpest global collapse in social, economic and employment activity on record...
...plus mass civil unrest across the US, some rioting, and the President calling out the National Guard against anti-racism protesters.
Whatever could have helped the stock market to shrug off all this gloom? 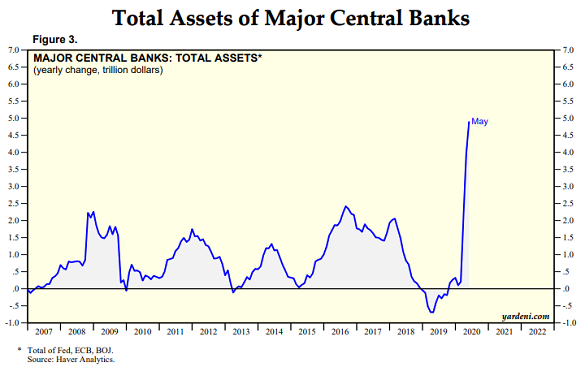 "There is an expression that you should never fight the Fed," says one fund manager to Bloomberg.
"But what the market has learned is that you do front run them."
Whether or not the US central bank now goes below zero with its key interest rate after this Wednesday's promise of unlimited stimulus disappointed equity bulls, who can say?
But prior to Jerome Powell's press conference this week, investors would have been forgiven for thinking that the Federal Reserve can in fact cure anything using its bazooka made of cash. Anything except an economic depression.
The biggest US junk-bond ETF last saw its largest-ever inflow last week, some $3.5 billion, as the US central bank continued buy corporate bonds rated 'below investment-grade'.
The 5 largest US corporations by market value meantime employ fewer people than ever before...
...while 'bored millenials' day trading stocks from deep inside furlough at home have helped fuel a bull market in airline shares, even as the sector faces months if not years of empty seats.
Among the uber-rich, tangible goods also seem to be gaining favour. Which might be a clue for the rest of us.
Citadel hedge fund founder Ken Griffin for instance just paid more than $100 million "for a canvas by Jean-Michel Basquiat, the late black artist who focused on issues of race and inequality," says the news. (Maybe a bit too nuanced right now, Ken. Not a good look maybe.)
"Is there too much optimism in the markets?" a Swiss newspaper asks perma-gloomster Albert Edwards, inhouse misery-guts at French bank Societe Generale.
"The question is," he replies, "at what point it becomes an embarrassment for the Fed?"
The stock market is supposed to peer into the future, and discount what it thinks will happen.
A bad outlook tomorrow, in other words, needn't mean bad losses in share prices today, not if the recovery next week is expected to erase the pain and pay ever-more profits to corporations and (therefore) their shareholders.
Here in 2020 however, with the world's sudden-stop depression so far masked by historic central-bank stimulus and deficit spending by government, the size of the bad is apparently good for share prices.
Because stimulus.
"Forget trying to make sense of it," as one trader put it to me last week.
"Just don't be short."
If you're still bearish on equities, that might prove wise advice. Because nothing so far has managed to dent this bull run.
But what if the risk to your money is not short term, but out there...way in the future...where the size of your savings or pension-pot will really start to matter?
Might there be a simple way to reduce your longer-term risk...? 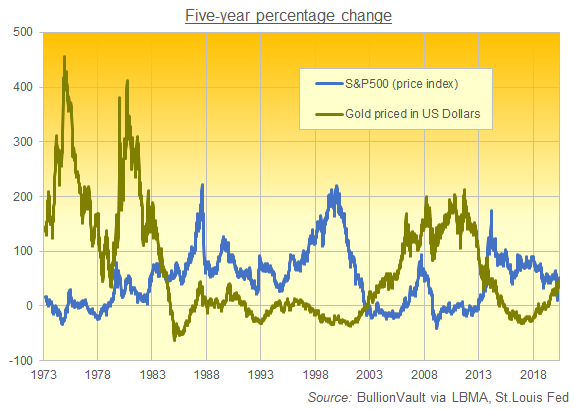 Short-term, buying gold to try and offset a drop in the stock market is no better than a coin toss.
Week-to-week, the S&P fell 44% of the time over the last 5 decades. Physical gold priced in US dollars fell in 46% of those weeks when the S&P fell, and it fell in 48% of the weeks when the S&P rose.
Useless, in other words.
On a 1-year basis (and again, using weekly data for our sums), things look a little better.
The price of gold has risen from 12 months before some 63% of the time that the S&P has fallen from 12 months before.
Out on a 5-year horizon however, better still. Much better.
Since 1973, the S&P500 has shown a loss from 5 years before 22.2% of the time.
Losing money is no small risk, in other words.
And when the US stock market did show a loss from 5 years before, gold priced in the Dollar showed a gain how often?
Out of the 549 weekends since April 1973 when the S&P showed a loss from a half-decade before, gold showed a loss only 11 times.
Eleven. Out of 549.
Put another way, gold rose 98% of the time that the US stock market fell from 5 years before.
Yes, we have noted gold's incredible record of offsetting stock-market losses before. And yes, at this point, your financial advisor...like the financial regulators...would cough loudly and wave their arms around. Not to try and clear the room for fear of spreading Covid, you understand. No, it's so they can alert you to the prescribed wisdom:

"The past is no guide to the future."

No kidding! Here in the craziness of mid-2020, we can all see the ancient truth in that old chestnut.
But really. 11 fails in 549. Across a half-century of data.
Today's short term defies understanding. But unless you're trying to trade tick-by-tick for a living, isn't it the long term which counts?