END_OF_DOCUMENT_TOKEN_TO_BE_REPLACED

Analysis of gold, the FTSE, cash, Gilts and inflation at UK General Election 2017...
MAKE NO mistake, writes Adrian Ash at BullionVault.
National ballots rarely move gold or other investment prices. 2016's Brexit referendum, like Donald Trump's win as US president, were exceptions rather than the rule – no doubt because, both times, traders and money managers mis-read the outcomes in advance,  guessing that a tight race would leave the status quo in place.
The shock of both Brexit and Trump proved however that gold can move on political headlines, but only if that news hits other financial markets. That's because, long term, gold's real value for investors and savers is as financial insurance.
With UK voters going back to the polls next month for General Election 2017, do they need to raise their insurance holdings again?
Gold today trades 15% higher for UK investors than it did on the eve of the Brexit ballot to leave the European Union. The FTSE100 share index has done better still, gaining 17% for Sterling investors, but lagging Euro and US stockmarkets once you account for the Pound's 10% slump on the currency market.
Looking to June 2017's General Election, UK investors and savers will also notice how last year's 52%-to-48% victory for Brexit has now been read by all 3 major parties as a landslide vote against the country's current distribution of income, wealth and opportunity.
Even the ruling Conservative Party has squeezed the word "fairer" into the middle of the adjectives on its homepage for this week's new plan "for a stronger, more prosperous Britain". Yes, the phrase "strong and stable" – the robotic keywords of Prime Minister Theresa May's presidential PR machine – does appear 13 times in the 88-page Tory manifesto. But words with the root "fair" appear 45 times, and "equality" seven.
Contrast the 1987 manifesto of Margaret Thatcher's deregulating, state-shrinking, investor-championing Tories. The word "strong" showed 21 times, but "equality" only once.

Theresa May's highly likely win over Jeremy Corbyn's Labour Party will also push back the Conservative Party's target for balancing the government budget. And anyone glancing at a 20-year chart of UK Pound gold prices will see it's not too dissimiliar from the fall, growth, surge and fall back in the UK government's deficit spending.
The relationship is far from perfect, and investors don't need a profligate (or "fair") government for gold prices to rise. But since 1995, gold priced in Sterling rose in 6 of the 7 years when the UK's annual deficit on government spending grew as a propotion of the country's economic output, averaging 15.6% year-on-year gains overall. Gold fell in 5 of the 14 years when the annual deficit fell compared to GDP, averaging just 2.1% gains overall. 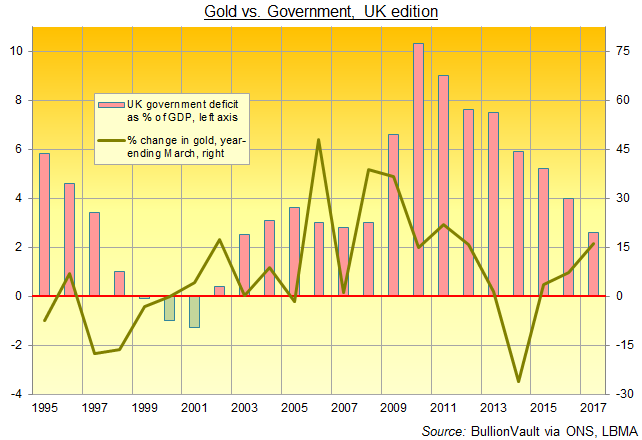 While a new Government can of course prove more or less friendly to savers and investors, it’s important not to over-state their influence on investment returns.
BullionVault's analysis confirms that, either side of a UK General Election, financial markets tend to continue in the direction they're already taking. So drawing hard and fast conclusions from the average historic patterns would likely prove foolish for investors wanting short-term protection or profit as June 8th approaches.
That said, and looking at the last five UK General Elections:-

It's not only government that goes into purdah ahead of General Elections. The financial markets also go quiet, typically showing lower volatility in the month before a UK vote than the 6 months either side, only to become more volatile in the month which follows.

Based on the standard statistical meaure of financial market volatility, our analysis suggests traders turn cautious as the ballot approaches, acting more decisively once the result becomes clear.

On average since 1997 (and looking at the medians), UK government bonds have outperformed both before and after the last 5 general elections, suggesting perhaps caution and then also relief once the new government becomes clear.

The FTSE100 in contrast has risen only weakly on average in advance and then fallen the following month, thanks mostly to the 2001 and then 2010 elections coinciding with sharp downturns in global equities.

Longer-term, and looking at the last six Governments, perhaps it's no surprise that both the FTSE All-Share and UK government bonds have shown their strongest annualized performances during Conservative administrations.
People might expect the City to vote Tory after all, if only because Mrs.May's new-found 'Red Toryism' leaves traders and money managers with nowhere else to go.

But inflation shows a more mixed record, and the Pound has slumped under both a Labour and Conservative government, thanks first to the banking crisis and now the Brexit referendum result.
That's also been when physical gold has performed best for UK investors, fulfilling its role as financial insurance whichever political party – and whoever's politics – are making the headlines.
Attachments: