END_OF_DOCUMENT_TOKEN_TO_BE_REPLACED

Da moon with Cuban, then Mars with Musk...
FOLLOW the money they say, writes Adrian Ash at BullionVault.
Few of us get a choice. Fewer still choose to change that.
So join the dots, solve the puzzle, win untold riches!
April 1978: Celebrity comedian and singer Bette Midler demands her fees for a British tour be paid in gold Krugerrand coins, not in Dollars or Sterling.
Or so the New York Times says. It's soon repeated (and repeats itself) time and again as pop-culture proof of the late-70s' gold mania among everyday savers.
Why rush to gold? All currency went 'fiat' a few years before, when the US finally cut the Dollar free of its gold backing. Now inflation is rampant. The Dollar trades near 5-year lows. Gold bullion is testing its record highs of 1975, rallying over 50% in 2 years. 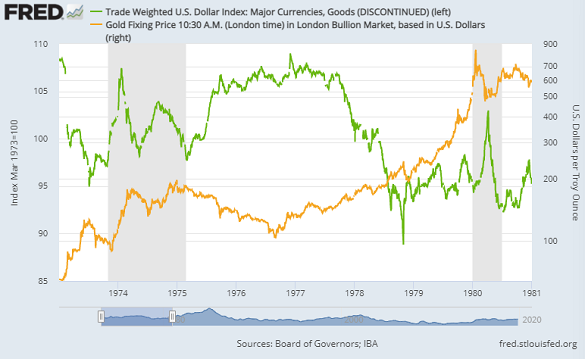 From a distance, Midler's contract rider still looks a smart move to this day. If true. And even though her main reason – or what everyone guessed was her prompt – proved false.
Over the following decade, the US Dollar surged by 50% against the world's other main currencies.
Still, 18 months after the story broke, Midler's little mountain of Krugerrand gold coins would have been worth $2.1 million. In nominal dollars, her very worst return – even at the very nadir of gold's bear market two decades later – would have been a 35% gain. Minus storage, insurance and dealing fees, of course.
Wrong but right. Hodl.
November 2007: The world's best-paid clothes horse – super-trouper-über-model Gisele Bündchen – demands paying in Euros, not Dollars, for promoting a US shampoo and an Italian perfume.
Or so Brazilian news magazine Veja claims. The world's media lap it up, from Bloomberg to Vogue. So do Dollar doom-sayers and, umm, gold bugs everywhere. Even though she wants Euros, not metal.
The big pull quote?

"Contracts starting now are more attractive in Euros because we don't know what will happen to the Dollar."

So says Bündchen's agent, sister Patricia. Or maybe she doesn't. Maybe Patricia isn't Gisele's agent. And if she is, maybe she denies ever talking about what Gisele gets paid anyway. The internet can't agree.
The BBC quotes Patricia's blunt denial even as it repeats her shot against the Dollar – apparently first given to Bloomberg, which then goes on to quote the furore its "idiot journalist" caused (to quote Patricia. Maybe) – in another story about another celebrity dissing the Dollar...
...this time Jay-Z flicking through a wad of Euros, not Dollars, in a video from his American Gangster album.
With such giants of bling taking aim at the Dollar, what next for the Euro? 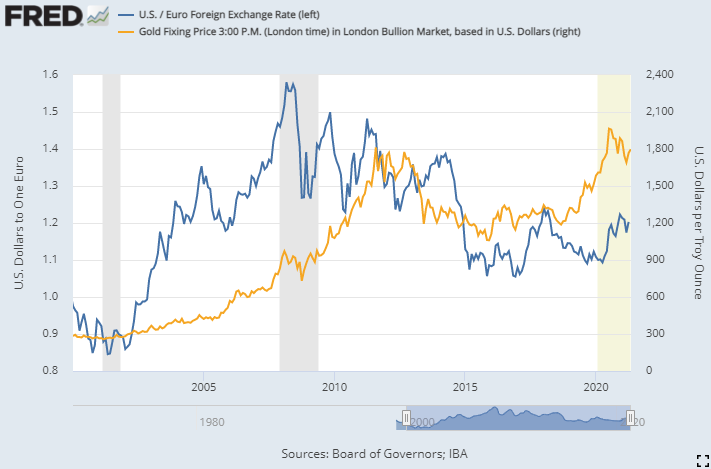 Europe's new super currency peaked against the greenback 3 months later. Then it barely looked back. Indeed, the Dollar hasn't been as cheap as it was in late-2007 against the Euro anytime since April 2011.
Wrong and wrong. Goxxed.
Maybe Gisele should've made like Midler, and demanded gold rather than Euros from Procter & Gamble and Dolce & Gabbana.
At best she could've taken 160% gains (before storage, insurance and dealing costs) as gold peaked above $2000 per ounce during last year's phase of the Covid Crisis. Over the entire 13 years, her gold would've shown an average gain of more than 65%.
April 2021: Kansas City Chiefs' Sean Culkin becomes the first NFL player "to convert his entire salary to Bitcoin" says everyone, everywhere.
No mysteries here. Culkin himself keeps repeating the news, plus his motives.
But also here, however, is where our celebrity rosta of Dollar Deniers starts to blur and run thin.
Sure, Culkin's stats may put him in the top 15,000 football players of the modern era. And his salary – now all being paid in Bitcoin remember, something he keeps telling his 15,000 followers on Twitter and 25k fans on Instagram – is a far-from-shabby $920,000.
But that's barely 6% of what top tight-end George Kittle picks up at the '49ers (228k fans on Twitter, 893k on Insta). Or maybe Culkin makes less than 5% what Kittle does. (Fanzine sites make tracking NFL salaries almost as arcane and complex as match stats.)
Still, Culkin has skin in the crypto game and he's not afraid to talk about it. And talk. And talk. Maybe Giselle's sister should have a word.

Since the beginning of this year, I’ve tried to be very intentional with my daily decisions and actions. I aim to optimize every situation. I realized it is impossible to be optimal through fiat. #Bitcoin enables optimality.

The NFL and now crypto star is, of course, far from the first "celebrity" to make headlines promoting digital tokens.
But he is, as far as we can tell, the first to go all-in by taking his wages in Bitcoin. The big money is still taking fiat, even as it promotes crypto.
Serial huckster and sports-team owner Mark Cuban, for instance, now loves Dogecoin so much, he wants you to buy it too. The crypto with the cute Shibu Inu dog-head began as a "silly joke" in 2013, and became a "force for good" (to quote now-uninvolved and "disappointed" co-founder Billy Markus) through charity drives helping fellow Dogers who got hacked through to building water wells in Kenya and funding the Jamaican bobsled team's trip to the Sochi Winter Olympics.
But so what? Its true value now is that it's "better than a lottery ticket" said Cuban last week on US daytime TV monster The Ellen DeGeneres Show.
Not a currency. Not a joke. Not a force for good. A lottery ticket.
Cue another flood of other people's money into Doge, with another flood now coming ahead of Tesla boss and celebrity cluster-meme Elon Musk hosting SNL this coming Saturday. 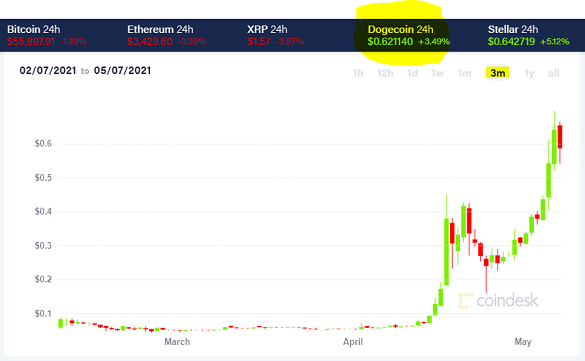 "Many other celebrities are connected with Bitcoin," gushed one UK website this February, naming "Paris Hilton, Gwyneth Paltrow, Bill Gates, Serena Williams...Kanye West and Mike Tyson.
"There are no details about their investments, but we are sure that they made a profit with it."
No details. Sure profit. Hodl on to your hat. Or your ankles. The crypto craze could have a long way to run yet. Gold and silver may this week have joined the race. Because the Fed keeps vowing to keep rates below inflation.
And like Musk recently tweeted, "When fiat currency has negative real interest, only a fool wouldn't look elsewhere."