END_OF_DOCUMENT_TOKEN_TO_BE_REPLACED

Gold price crash or massive Asian investment? Certainly redeployed available metal...
A YEAR AGO this Friday, writes Adrian Ash at BullionVault, a leaked IMF-EU paper told Cyprus to sell a chunk of its tiny gold reserves.
It never did. No Eurozone central bank has sold gold since France quit in 2009. But already advised that week to sell short by Goldman Sachs, the market took fright.
No one owning gold or silver in April 2013 needs reminding of the gory details. ( Horror fans will find gold's $1 trillion crash explained here.) But with hindsight, and without the need for valium, three points deserve comment today.
#1. Gold met very strong demand last April. Just not in the form of financial securities or derivatives traded on Western exchanges. So while the spot price "gapped down" on the morning of Monday 15 April, 2013...with few buyers daring to catch it...the surge in China and India's retail bargain-buying clearly put a floor under the market.
#2. Such wrenching shifts in price, and also in who owns what gold where, changed the gold market's dynamics, of course. Price aside, the 2013 sell-off by Western investment funds was just as much a huge investment purchase by Asian savers. So to serve those respective customers better, the bullion market has re-deployed its available stockpiles.
Some odd things result... 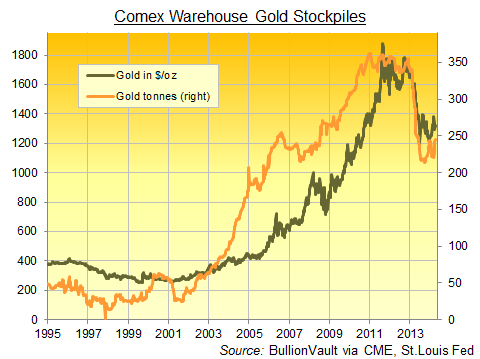 #3. Albeit perversely, last year's crash also proved gold's insurance function, forcing through almost half of last year's 30% price drop. That loss mirrored the boom in world and particularly US equities, as our asset performance comparison table shows. Today that boom is now being compared with the S&P's bull market ending October 1987, and while many "scary charts" linking today with Black Monday look stretched, equity valuations are stretched further.
Gold's two-day crash in April 2013 wasn't its worst percentage fall (that was January 1980, just after its famous $850 top). New York's Dow Jones stock index lost twice as much in the Great Crash of 28-29 October 1929. The London stock market matched last year's gold drop in one session alone in October 1987. Back then, UK shares dropped another 12% the day after Black Monday as well.
So yes, gold can be volatile. No, it won't protect you from wrenching losses or sleepless nights. Last spring's crash was horrid. But stockmarkets can be worse. Gold jumped 5% on Black Monday 1987, and it rose 5-fold in terms of the business assets it could buy during the Great Depression that followed the 1929 crash.
Investors wanting financial insurance might want to get some before the rush. It is, after all, much cheaper than early April last year.