END_OF_DOCUMENT_TOKEN_TO_BE_REPLACED

European central banks are Buying Gold, not selling it...

HERE's a turn up, writes Adrian Ash at BullionVault.

Eurozone central banks have stopped selling and started Buying Gold so far in 2011.

Only by €6 million mind you, and all of it in coin according to the European Central Bank's weekly statements. But this net Gold Buying still stands, even ignoring Estonia's 0.6 tonne purchase at New Year (its contribution, on joining the Euro, to the ECB's reserve assets). 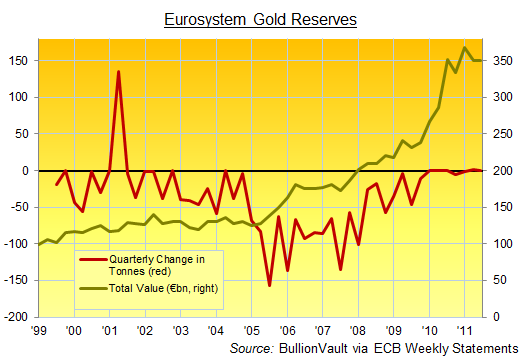 New-member stockpiles and data adjustments aside, it's the first net rise since the single currency was launched in 1999.

Just shy of 180 kilos by our maths here at BullionVault (that's 5774 troy ounces in old money), this year's small addition-to-date to the Eurosystem's gold bullion holdings barely registers against the 1,937 tonnes of sales over the previous 12 years.

It's also a drop-in-the-bucket compared to the Eurozone's joint spending on Greek, Irish and Portuguese bail-outs too, let alone the ECB's swollen balance-sheet. But it confounds those "rumors of rumors" of European central banks selling gold here in 2011 to help fund the next round of Eurozone rescues.

"Where there is rumored smoke," reckoned Dennis Gartman of the eponymous $5000-a-year newsletter at the start of June, "there can be actual fire." Whereas in fact, where there's a genuine crisis, central banks are loathe to sell – as the Bank of Italy proved in summer 2009 (and under the leadership of the ECB's likely new chief Mario Draghi too).

It's when everything looks just fine that central banks sell. Because "Who needs gold when we've got Alan Greenspan?" as the New York Times asked in 1999.

Twelve years ago, with Gold Prices in a 20-year bear market, those central banks about to toss their currencies into the dustbin of history and unite under the Euro found themselves holding much more of the yellow stuff than they wanted.

Yes, once the Great Inflation of the 1970s and '80s was out of the way, they'd already been selling their gold reserves down for a decade or so. And yes, gold would play a key role at the new European Central Bank too, accounting for 15% and more of the reserves transferred to the new Frankfurt super-bank from each member's national hoards.

But as the single-currency project was smacked into life, its member nations still held on average over 30% of their total foreign-currency reserves in Gold Bullion – gold which they wanted to replace with better yielding, less yellow and less indestructible assets. And then Gordon Brown struck.

You remember Gordon – big, moody fellow. Destroyed the UK's pension savings. Ruined its public finances. Still not sinister enough to run the IMF. In his wisdom, and counselled by pretty much everyone who bothered to look – as well as recent gold sales from Australia, Austria, Canada, the Netherlands, Belgium, Switzerland and South Africa (but against the advice of both the Bank of England and the two biggest bullion banks) – Brown announced in June '99 that starting two months later he would sell over half the UK's remaining gold reserves. At a two-decade low. With two months' notice. And with 40% of that very same UK gold already out on loan (not that anyone spotted it then) and thus available for short-sellers to borrow – and sell – thus depressing prices still further by the time Gordon's gold sales actually began in August.

Now, back in 1999, and across the Channel, all those central-bank types lining up to sell another chunk of their national gold reserves were horrified by the UK's cack-handedness. So rather than leaving the market to try and second-guess where the next such moron might spring from – again depressing the price, already 75% off its top of Jan. 1980 – the Europeans got together (and got Gordon together too, as well as the Swiss, who'd just held a referendum on selling a chunk of their massive gold hoard) to agree that, henceforth, they'd cap the sum of their sales. Most important, they'd tell the world in advance.

The first gold agreement was signed in Washington (hence the name given by analysts) in September 1999 and ran for five years. It was renewed in 2004 (wittily termed "the second Central Bank Gold Agreement"), before being renewed again (as "the third") in Sept.2009.

But the question, with market-prices for Buying Gold now at new all-time highs – and with the banking crisis swiftly morphing into the largest state deficits outside of war – was why bother?

Note also how the ceiling fell back to 400 tonnes per year under CBGA3. Because a 500-tonne annual limit would have been plainly absurd in 2009, what with annual sales already down to 157 tonnes. But also note that, of the 189 tonnes sold so far during the first two years of that agreement, fully 181 tonnes came NOT from the signatory central banks, but from the International Monetary Fund instead.

The IMF sold some 403 tonnes of gold bullion between Sept. 2009 and Dec. 2010, putting itself (and being accepted) under the umbrella of CBGA3 with a sale first proposed in 1999 by – oh! – Gordon Brown and then talked up by – no! – Alan Greenspan in 2007. The aim was initially to raise cash for third-world debt relief. But in the end, it was the IMF's own persistent losses, made under Dominic Strauss-Kahn, that led its member nations to agree, simply to keep the IMF afloat.

That's why the IMF's gold disposal has been unique amongst "official sector" sales, both in being forced and also in being conducted at record-high prices. 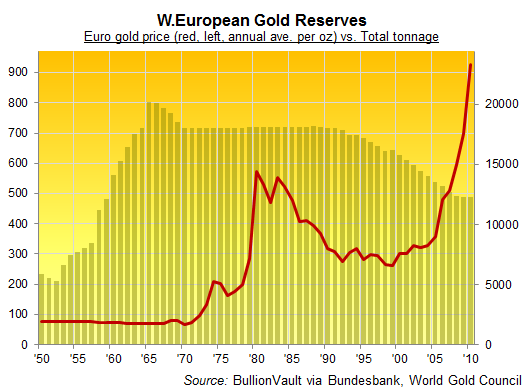 "One does not have to be an amateur investor to sell low," as the late Peter Bernstein noted in his classic history, The Power of Gold. Put another way, central banks would rather sell when the gold price is low than when it is rising. Because the higher the gold price, the more you need it if you're charged with defending stability.

Whatever the legalities of selling (or perhaps leasing) Eurozone gold holdings to raise emergency cash for the state – and Italy's failed 2009 attempt says it's unlikely to get past the ECB, with or without Mario Draghi at the helm – the blunt fact remains. Selling amid crisis would be to announce the end of the world. And that's not what central bankers are paid for, even if it is what they seem to be bringing about.

Buying Gold for your own crisis reserves today...?