END_OF_DOCUMENT_TOKEN_TO_BE_REPLACED

Nope. The Under-30s have not stopped buying gold...
GOLD gets one mention only in the fabled Bitcoin whitepaper of 2009, writes Adrian Ash at BullionVault, rounding off this look at crypto vs. precious from last week's APPMC.
Satoshi Nakamoto – whoever that was – merely noted that, by forcing Bitcoin miners to solve mathematical puzzles to create each new token, "the steady addition of a constant of amount of new coins is analogous to gold miners expending resources to add gold to circulation.
"In our case, it is CPU time and electricity that is expended."
That's it. That's all the whitepaper says about gold.
Yet the chatter around Bitcoin being just like gold – only better, and therefore challenging gold as an investment – has continued to grow.
"Bitcoin is gold 2.0" said the ever-hilarious Winklevoss twins to Fox and then to Bloomberg in 2017. They said it again to CNBC in 2019...
...and again and again since then to anyone else who might listen.
Hi-tech and new, Bitcoin is "better than gold" agrees sports and media mogul Mark Cuban. He said so on Twitter this Monday...
...giving 'news' writers across the web a headline to copy and paste...
...just like he did when he said it in early March...
...at the start of April...
...and again in mid-May.
Cuban also recycled his "better than" formula back in late-April for another crypto versus another long-running asset.
"DogeCoin," Cuban said of the comedy token to TV's Ellen Degeneres, "is better than a lottery ticket."
High praise if you're looking for an investment that *might not* crash to zero. Doge almost tripled over the following week, thanks no doubt to Cuban's fellow celebrity shill Elon Musk talking up the 'coin' ahead of his fateful slot as host of Saturday Night Live.
Since then however it has come right back down, erasing every last cent of the gain made following that fateful Ellen appearance.
Still, it's not dropped to zero. Not yet. Better than a lottery ticket.
So c'mon kids, this is the future! 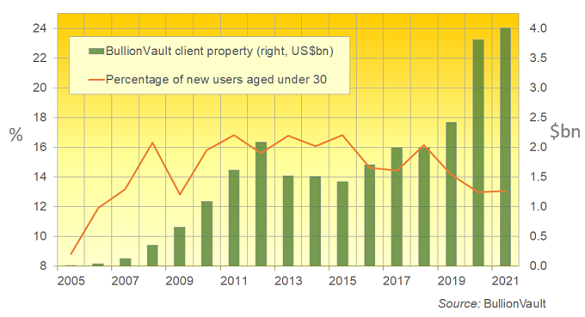 2020 saw Bitcoin really go mainstream, winning headlines and investor inflows like never before in its decade-long life.
Being computer code, and being so very novel, it naturally appeals to younger investors than middle-aged grumps and grey hairs. Or so everyone guesses.
Hence our chart above. Because 2020 saw people aged under 30, as a proportion of all new first-time users of BullionVault – the No.1 market for private investors wanting to trade gold and other precious metals safely, instantly and at low cost – drop to just 13%.
This drop actually began in 2019, so it's been in train for some time already. Which means the future looks brighter for crypto than for precious. Because tomorrow's investors have abandoned bullion. Right?
Not quite.
2020 was in fact a record year for new users of BullionVault. And while the proportion of those new users aged under-30 did indeed fall, the number of first-time users aged below 30 actually trebled from 2019's count.
Hardly a crash.
Now 2021 continues to see very strong under-30s' interest as well. Already by the end of May in fact, this year had matched 85% of the pre-Covid 5-year annual average of new U30 users.
Again this signals strength, not a demise. And even if the data pointed the other way (which they do not) it would be worth noting that today's younger investors have way more choice and variety in assets to buy and trade than any generation starting out in history.
Perhaps real estate is shut off. (The relentless narrative is that youngsters can't get a foot on today's over-priced property ladder. Home ownership in the US has however started to trend higher again after the bubble and bust of subprime.)
But besides the boring old options open to Gen Y + Z's parents back when they started saving (pretty much mutual funds and larger domestic stocks) it has become much easier to access the commodity markets thanks to ETFs...
...currencies through spread-betting and CFD platforms...
...and also foreign as well as small-cap and micro stocks....
...all available in bite-size 'fractionalized' chunks (through Robinhood for instance) or leveraged derivatives (through eToro and the rest).
Investors of any age and with even the smallest means can now take a seat at pretty much any game in the casino. Crypto is just one more option, and – anecdotally at least – the gambling analogy holds good. Because rather than using Bitcoin as a major destination for new savings, every U30 investor I have asked is putting very little into these "lottery tickets" relative to much larger holdings of less volatile, more traditional but now more widely available assets.
Gold is clearly one of them. And for good reason. 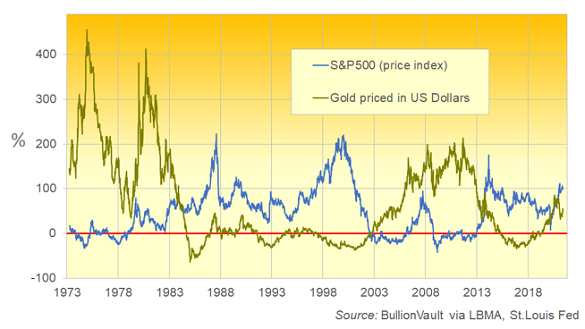 "To protect against inflation, gold is the classic hedge," say the now middle-aged Winklevoss twins.
"So if this was the 1970s we would probably be buying and holding gold, but today we have Bitcoin."
Maybe. We'll have to wait and see how Bitcoin fares when (or if) inflation really does take off or at least take hold beyond this spring's spike.
But inflation is only one risk for which gold is the "classic hedge". It also offers to protect against a slump in the wider financial markets, led by equities. And its track record here, proven across the last half-century, is remarkably strong.
No, gold isn't guaranteed to jump if your stock portfolio sinks next week, nor next month or even over the coming year. But on weekly data, and looking at 5-year performance, the price of gold has risen 98.0% of the time that the S&P500 index has fallen from 5 years before.
Such extended periods of stock-market losses are no small risk. Investors have been underwater 5 years after buying the S&P more than one-fifth of the time over the last 50 years. Gold has been almost always been higher. And while the S&P has delivered an average 11.6% loss over those 5-year periods when it fell, gold showed an average 133.7% gain.
Again, that performance isn't guaranteed for the future. But it's very robust across the last half-century.
Will Bitcoin repeat that, or even beat it?
Whatever crypto might become in the future, it has shown no sign whatsoever so far of acting as a 'safe haven'. So whether or not it does somehow come to challenge rare, physical, indestructible gold as the classic inflation hedge – the ultimate store of value in all cultures and all ages – any investor thinking (or promoter claiming) that Bitcoin might replace gold needs to ask (and answer):
Will Bitcoin also help offset prolonged losses in risk assets?
Without that appeal or track record, Bitcoin is going to remain an utterly different asset to gold, very far from a replacement.