END_OF_DOCUMENT_TOKEN_TO_BE_REPLACED

March data still show near-record net inflows of gold to China through Hong Kong...
CHINA GOLD stockpiles remain "ample" according to bullion bank analysts and traders, with weakness in the Yuan currency further deterring a rise in gold imports to the world's No.1 consumer nation.
"Hong Kong and Switzerland trade data show slowing gold shipments to China," says ANZ Bank commodity strategist Victor Thianpiriya in Singapore, with March's net flow to the mainland through Hong Kong dropped 25% from February's near-record monthly figure of 111 tonnes.
"The Swiss gold trade data showed that exports to other Asian destinations remained relatively robust," Thianpiriya adds, with India's intake rising 10% month-on-month "in contrast to the slower Chinese market."
Reflecting this slowdown in China's gold demand – overtaking India as the world's heaviest in 2013 – prices in Shanghai last month traded at a discount to the world's benchmark of London quotes.
ANZ's analysis says the bank expects China gold imports "were also weak in April, as the spread between the two markets remained negative for most of the month." 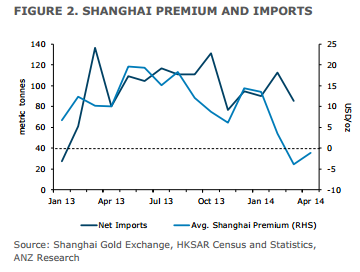 Gold trading volumes on the main Shanghai exchange – the only legal entry point for refined metal into China's private sector – "was the poorest since October," adds Swiss bank UBS's strategist Edel Tully.
Thanks to a lull in festive and holiday demand, "Shanghai volumes in May, while not the lowest, are usually quite moderate," Dr.Tully goes on, concluding that "current gold prices are in excess of where physical demand lies, and local supplies remain ample."
"The expectation is gold orders into China will be lower in the next few months," agrees Jeremy East, global head of metals trading at Standard Chartered – who moved his bank's operations from London to Hong Kong in June 2013, the better to address China's gold market.
Driving the drop in Shanghai prices relative to London, and so removing the "arbitrage" profits to be made from importing metal from Europe, is the "exchange-rate move" in the Chinese Yuan, says East, speaking last weekend to Bloomberg.
"We're waiting to see whether it will have impact on total demand for gold from China for this year."
ANZ's Thianpiriya agrees, saying that "The weak Shanghai-London price differential, largely due to a depreciating local currency, seems to be a key catalyst for the sluggishness" in China gold imports.
March's net inflows from Hong Kong, however, reported at 85 tonnes, were only just shy of 2013's monthly average.
Full-year net imports through Hong Kong to China rose one-third by weight to more than 1,100 tonnes, extending the 95% rise of 2012.