END_OF_DOCUMENT_TOKEN_TO_BE_REPLACED

Analysts split on China's demand as gold jewelry tastes change...
LEADING ANALYSTS are split over the prospects for China's private gold buying in 2018, as a "healthy outlook" from one consultancy contrasts with a "tough year in store" from another.
"China's gold demand is likely to have peaked in 2013," says Thomson Reuters GFMS, "and is very unlikely to return to those levels in future, regardless of the state of the domestic economy."
Most notably, household demand for gold bars was "sluggish" through most of 2017, GFMS says, while consumer taste in jewelry continues to shift away from pure gold to lower-carat fashion items sold at higher mark-ups.
Having risen for 3 years running however, China's gold investment demand is set to grow another 6% in 2018 counters analysis from Metals Focus, while the gold jewelry market "bottomed out in 2016 and is undergoing a modest recovery.
"The main driver behind this promising turnaround has been the improving Chinese economy and its positive impact on consumer sentiment."
Data from China's National Bureau of Statistics say the world's second-largest economy grew 6.9% in Yuan terms in 2017 – yet again meeting the Beijing politburo's official target – with gross domestic product expanding to more than CNY 82 trillion.
Household gold demand for jewelry and investment combined grew 4.2% by weight meantime, recovering more than half of 2016's steep fall according to data compiled by Metals Focus for mining-backed market-development organization the World Gold Council.
On a quarterly basis, China's private jewelry and investment gold demand historically peaks in the January to March period, when the Lunar New Year holidays and gift-giving celebrations spur the heaviest household buying.
On BullionVault's analysis, 2013 was the only year since at least 1997 when Chinese household spending as a proportion of GDP peaked outside of Q1, rising to a record peak at 0.94% as Yuan and global prices then sank in gold's worst quarterly crash for 3 decades. 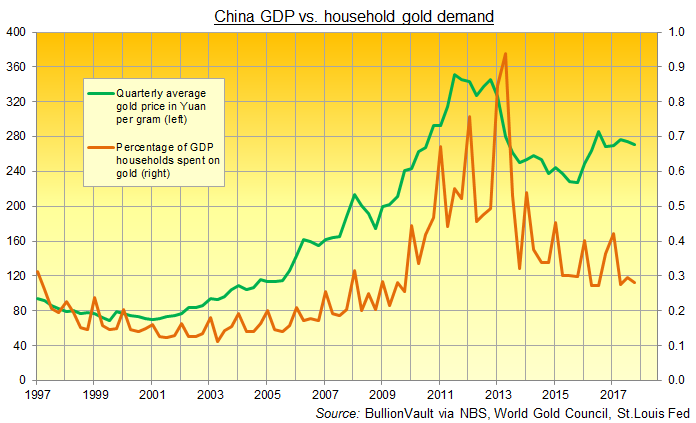 "The reality is that the Chinese community is shifting from treating gold jewelry as a safe haven asset to a fashionable complementary," writes senior GFMS precious metals analyst Samson Li.
"This is especially noticeable with younger generations."
Metals Focus also notes China's changing tastes, but sales of 999 purity items "were flat [in 2017] compared to the sharp declines recorded in previous years," leaving sales of both lower-carat fashion and higher-carat luxury pieces "to lift the total" weight demanded overall.
Here in 2018 "show rooms were very busy during our visits to Shenzhen in January," Metals Focus goes on, also reporting and forecasting growth in sales of gold investment bars through non-bank channels, plus greater interest "from sophisticated, often high-net worth investors looking at gold as a portfolio diversifier."
GFMS also points to gold as investment diversification, tempering its more gloomy outlook with the caveat "barring any huge market panic".
"Most coverage of china's debt problem has rightly focused on its corporate sector," says a note on the Financial Times' Alphaville blog.
"Chinese households, however, are quickly catching up. This is bad news."
Latest available data suggest Chinese households had outstanding debts equal to some 106% of their disposable income, the FT explains – very nearly the same level as US households, but shooting from just 40% a decade earlier while US indebtedness "has been basically flat" since falling after the global financial crisis.
Now the No.1 gold consumer nation by weight for 5 years running, China has also been the No.1 gold-mining producer since 2007, although output fell over 9% last year amid tighter environmental regulation of the sector by Beijing.
Among official reserves, the People's Bank of China remains the 21st Century's heaviest gold buyer to date. Now reporting the fifth largest total (behind the US, Germany, Italy and France) with bullion reserves of 1,842 tonnes, the PBoC has added more than 1,447 tonnes since the start of 2000. That's just ahead of the 1,406-tonne addition taking Russia to No.6 among national gold holders with reported reserves near 1,839 tonnes.