END_OF_DOCUMENT_TOKEN_TO_BE_REPLACED

Imports jump, dealers re-stock, households buy as Rupee curbs gold price...
DEMAND to buy gold in India – now the No.2 consumer nation behind China – has rebounded in early 2017, driving imports higher from last year's slump as dealers re-stock and local prices rise back above international quotes ahead of a key Hindu festival.
Smaller than the autumn festivals of Diwali and Dhanteras, sales of jewellery for the Hindu festival of Akshaya Tritiya have become key to India's annual gold buying.
Coming from the Sanskrit for "indestructible" and widely celebrated across southern states, this auspicious day for buying gold falls in 2017 in the last week of April.
"Jewellers are anticipating good retail demand during Akshaya Tritiya," Reuters quotes wholesaler Daman Prakash Rathod at MNC Bullion in Chennai, where prices have risen $1 per ounce above quotes for London settlement – the global reference rate – after also accounting for India's 10% import duty on gold bullion.
Indian prices held at discount throughout most of 2016 – "one of the most difficult years on record for the Indian gold industry," according to a recent report from specialist analysts Metals Focus – pulled down by jewelry demand sinking one-quarter to the lowest this decade.
That slump came as the government, already seeking to deter and divert gold-buying demand into financial products, added a new sales tax on jewelry, plus tighter purchase reporting rules and then the shock 'demonetisation' of larger banknotes in November. 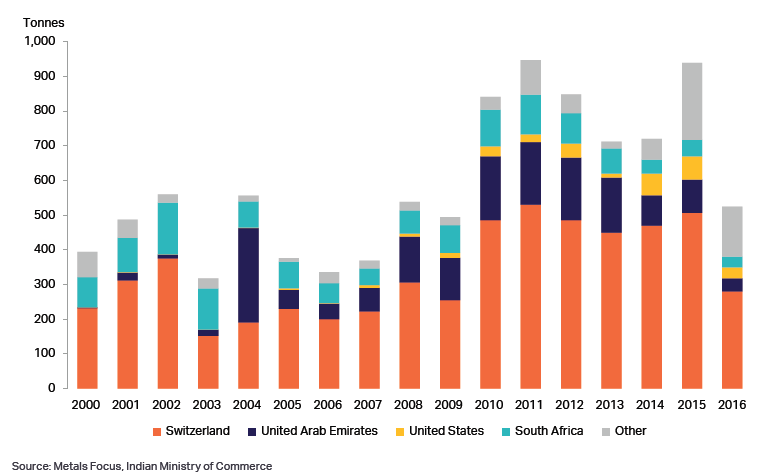 Aimed at curbing corruption and undeclared income, demonetisation cancelled 86% of all currency in circulation with barely 4 hours' notice. "Consumers rushed to buy gold," says Metals Focus in its Gold Focus 2017, depleting retailers' stockpiles and – with the uncertainty after demonetisation now receding – spurring a recovery in imports so far this year.
"Imports were down till January due to demonetisation, so now people are re-stocking," says retailer Gitanjali Gems Ltd chairman Mehul Choksi.
A rally in the Rupee's exchange rate has also limited gold's domestic price rise since January, halving the global Dollar-price rise of 12%.
"That's a great attraction for people to buy gold," reckons mining producer-group the World Gold Council's director in India, Somasundaram P.R.
But because gold prices are rising, the Rupee may now weaken again as spring imports weigh on India's current account deficit, according to analysis published this week by Japanese bank Mizuho's economists in Singapore.
The April-June period has seen India's deficit on payments to the rest of the world widen in four of the last six years, says Bloomberg data.
"The Rupee has declined in each of the last seven April-June quarters."
India's jewelry business faces further uncertainty in mid-2017, when the government will introduce the new nationwide General Sales Tax (GST), unifying the rate levied on a huge range of goods and services.
"By the international standard," says Surendra Mehta of trade lobby the India Bullion & Jewellers Association, " bills must be made showing making charges separately" – risking confusion and higher costs to consumers as the 18% rate applies to manufacturing value against the standard GST levy of 2%.
"We have urged the government to levy the same rate on gold and [on] jewelry."