END_OF_DOCUMENT_TOKEN_TO_BE_REPLACED

Some people do, some don't. Some buy lots more...
RIGHT or WRONG, people tend to buy gold when they fear inflation ahead, writes Adrian Ash at BullionVault.
Gold prices in fact show no relationship with inflation rates month-to-month or year-to-year.
Across longer periods, the rare and indestructible precious metal famously rose when the cost of living soared in the 1970s.
But it rose again when inflation less famously stayed quiet in the early 2000s. 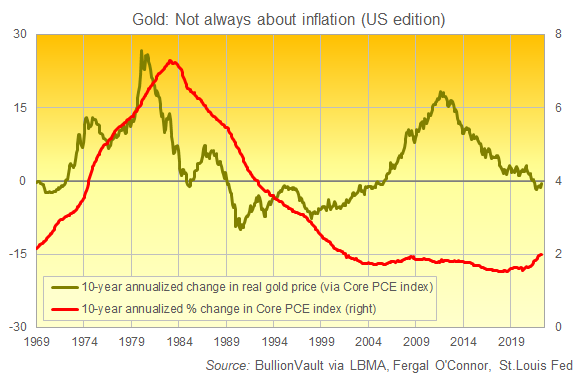 Still, markedly higher inflation has gone with higher gold prices in the past, and now inflation has turned sharply higher once more.
Gold investment demand has done the same. Or at least, some of it has.
US consumer prices rose 8.5% per year in March, the fastest annual rate since the deep recession of 1982.
US households meantime doubled their first-quarter gold coin and small bar demand compared with the previous 5 years' Q1 average ( source: World Gold Council) and BullionVault saw net gold accumulation by US users rise 83%.
UK consumer prices also jumped, rising 7.0% per year in March, the fastest cost-of-living increase in 3 decades on the CPI measure. But UK gold coin and small-bar demand rose less steeply than in the US, increasing only 22% by weight from the prior 5-year Q1 average.
More plainly, BullionVault's UK users were in fact net sellers, liquidating 5 times as much gold bullion as they had bought on average in the first 3 months of 2017-2021.
Maybe gold's own price inflation drove that difference. Because while US Dollar gold rose a little over 4% per year across Q1 2022, the UK gold price in Pounds per ounce averaged a gain of 7%.
German households, however, saw gold prices jump faster still – up by more than 12% in January-to-March compared with the average of Q1 2021 – yet their gold demand grew faster than the UK's, rising by more than a third against the 5-year Q1 for coins and small bars, and it grew faster even than among US users of BullionVault, rising by 92%.
By weight, in fact, Germany's gold investment demand outweighed the US between January and March on both BullionVault and in the small-bar and coin market. Which shouldn't come as a surprise. 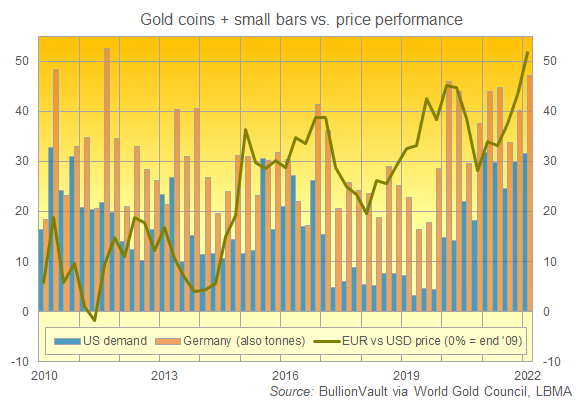 Germany has a population only 1/4 the size of the US, with economic output 30% smaller on a per capita basis. Yet it has outweighed US gold investment demand on BullionVault two-thirds of the time over the last 5 years, and it has outweighed America's small gold bar and coin demand in every single calendar quarter since late-2016 according to the World Gold Council's data.
How come? It might seem lazy (if not rude) to try identifying national traits behind certain investment decisions (not that it's stopped us trying in the past). Trends and changes offer more insight, and it's plain that – whatever the core motivations – something has happened in the last decade to supercharge Germany's already outsized demand to buy gold.
More on that to come on GoldNews next week.
Upshot meantime? People really do buy gold when inflation rises. Some more than others, and some starting from a much bigger base.