END_OF_DOCUMENT_TOKEN_TO_BE_REPLACED

The central banks in the UK and New Zealand keep raising interest rates, and the money only soars as a result...

THE US FEDERAL RESERVE looks to be caught between a rock of rising inflation and a hard place of plunging house prices. But if you feel at all sorry for Ben Bernanke and his team, pity the poor central bankers in London and Auckland.

Every time they raise their interest rates, house prices go up!

The Bank of England, for instance, has now hiked its lending rate seven times in the last four years. At the June policy meeting, the governor – Mervyn King – tried to raise rates again, but he was out-voted by the government-appointed bureaucrats on his team.

Now the currency markets reckon a hike in July is a shoo-in, pushing the Pound back towards $2.00 again. Sterling is flirting with a two-decade high versus the Yen, too.

But besides its interest-rate premium, there's little to love in the Pound today. Investors wanting to buy gold today might note that the truly historic real-estate bubble – plus a surging trade gap and yawning government deficit – is matched by the fastest growth in the Money Supply since the late '80s. 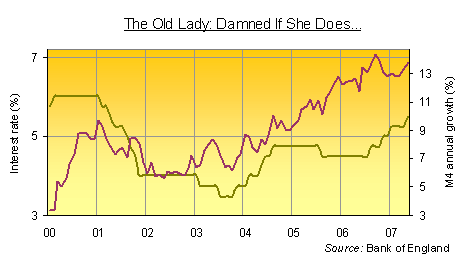 What gives? After jumping off a half-century floor way ahead of the four other major world currencies, Pound Sterling interest rates have already reached 5.50%. The gilt market puts the cost of money a year from now well above 6%.

But every time the Bank of England hikes its base rate, fresh funds flood into London, seeking out yield and judging Sterling a better place to sit than Dollars, Euros, Yen or Swiss Francs.

This flood of cross-border cash from global investors gets picked up by London's brokers and banks, but their job is to lend money – not simply to pay interest on it. Nor can they neglect to work their assets, not without angering their shareholders. So they lend it out into the domestic economy. Hence broad money growth (M4) rising at double-digits year-on-year ever since the Bank of England began this hiking cycle.

The upshot in the domestic UK economy? House prices in Northern Ireland rose 54% in the last year alone. The average home in London now costs £320,000 according to the government's own data, equivalent to more than $630,000.

Down under on the opposite side of the world, meantime, the Reserve Bank of New Zealand faces the same problem – only in spades. Higher rates keep working against the RBNZ's anti-inflationary aims. Every time they hike the cost of money, more cash floods in the New Zealand Dollar – and the more new lending results. 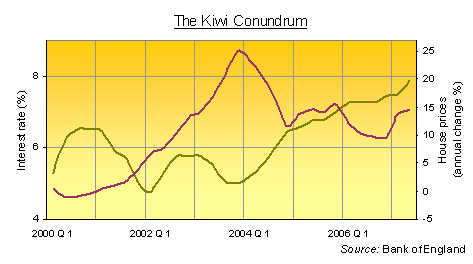 Fully convertible for 22 years, the New Zealand Dollar this week touched an all-time high versus the US greenback. Indeed, the Reserve Bank now presents the world with a truly absurd spectacle – raising its overnight lending rate to 8% to quash inflation, but also trying to quash the rising Kiwi Dollar by selling it on the currency market.

"What determines what happens with the currency is ultimately what the Reserve Bank does with interest rates," notes Nick Tuffley, chief economist at ASB Bank in Auckland.

"That will keep the kiwi supported," he adds – noting that all the currency intervention in the world won't stop cross-border investors grabbing 8% interest and pushing the Kiwi still higher again.

Indeed, until the rest of the world stops giving money away at less than inflation – most especially the global money pumps of China and Japan – the Pound and the Kiwi will only attract fresh monetary inflation the higher their interest rates go.

How long this absurdity continues to keep the BoE and RBNZ trapped is anyone's guess. But investors waiting for the impossible to stop being possible might be well advised to buy gold ahead of the turnaround.