END_OF_DOCUMENT_TOKEN_TO_BE_REPLACED

Here's what the stock market thinks it knows about Covid-19...
HOW BAD is the Covid Crisis? asks Adrian Ash at BullionVault.
I mean really, is it all that terrible?
Yes, hundreds of thousands of people have died before their time.
Hundreds of thousands are still uncounted and thousands more are sure to follow.
Yes, many millions of survivors will have also suffered a real, lasting trauma...
...not to mention the healthcare workers trying to save them, cheered and applauded all the way back to the front-line each day, ready to go over the top again...
...with millions if not billions more of us permanently scared mentally, emotionally and/or financially as well.
Yes, government debt is also leaping, saddling future generations with untold obligations as today's leaders try and offset the Great Lockdown depression they have imposed on half the world.
And yes, our civil liberties are getting crushed in the rush to 'stick together' against this tiny, unseeable, perhaps undefeatable enemy.
But to quote stock-market investors, so what?
Really, who cares? 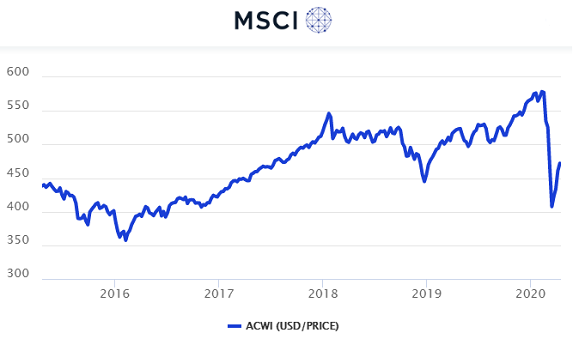 The equity crash of March 2020 saw global stock markets lose one-third of their value in US Dollar terms inside 6 weeks.
That only just outpaced the Lehmans Crash phase of the global financial crisis in autumn 2008.
And since the late-March lows, global equities have now rebounded by 25% inside one month...
...by far the fastest global rebound we can find recorded anywhere...
...because, well...because...ummm...just because, okay?
"This is a crisis like no other," says the International Monetary Fund. And the IMF should know. Because it's created a few!
"It is worse than the Global Financial Crisis, and the impact of the coronavirus...will, across the board, be severe and unprecedented."
Looking just at Asia (font of the the world's economic expansion over the last 2 decades) growth "is expected to stall at zero percent in 2020...the worst performance in almost 60 years."
Pretty much everywhere else will shrink, dragging global GDP down by 3% this year overall, the IMF predicts.
But after that? 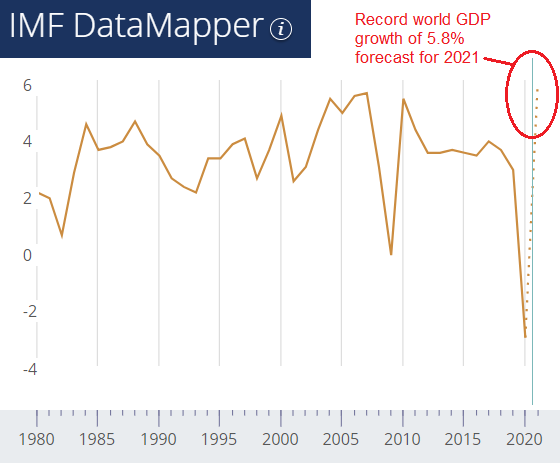 "This is a real economic shock and requires protecting people, jobs, and industries directly," says the IMF.
Maybe that protection is included in the IMF's forecast for 2021 economic growth.
Or maybe the protection now underway will only add to the surge in demand which everyone expects will follow the calamity we are living through...
...but only if it succeeds in staving off the collapse now underway.
"Last day to enjoy up to $650 off," says the website of luxury New York department store Bergdorf Goodman, advertising party clothes for spring/summer events now cancelled or delayed indefinitely.
And no kidding. Because the owner of that Fifth Avenue legend...retail operator Neiman Marcus...has fallen into its final days too...
...shutting its nearly 70 stores across the US...
...furloughing most of its 14,000 staff...
...and now preparing to file for bankruptcy thanks to owing $4.8 billion (thanks mostly to a leveraged buy-out in 2013) and continuing to incur costs even while revenues flatline near zero.
This retail apocalypse was well underway, of course. But it was a slow, grinding demise. not a sudden hit-the-wall collapse.
Against such job losses and credit defaults, "The IMF estimates that around the world $8 trillion has been committed in spending, loans, and guarantees to cushion the impact of the shock," says history professor and economics author Adam Tooze.
"That is a remarkable 9.5% of global GDP. Deficits will rise more sharply than in 2009 at the low point of the financial crisis. [And] in the last few weeks, more than 100 countries...that is, more than half the members of the United Nations...have applied for help from the IMF."
"The coronavirus pandemic is the first crisis since the 1930s to engulf both advanced and developing economies," adds economics professor and ( infamous) historian of sovereign debt Carmen Reinhart, warning that we face a repeat of that "demise of an era of globalization.
"More than 40% of all countries at the time entered default, cutting many of them off from the global capital markets until the 1950s or much later. By the time World War II ended, the new Bretton Woods system combined domestic financial repression with extensive controls of capital flows, with little resemblance to the preceding era of global trade and finance."
Other pundits and professors also look at the post-WW2 era, but find more hope.
"The economic system we construct after this pandemic will have to be less shortsighted, more resilient," says one, also writing at Foreign Policy magazine.
"Though the enemy is now a virus and not a foreign power," says another, "the Covid-19 pandemic has created a wartime atmosphere in which such changes suddenly seem possible.
"Since we are all on the same side in this war, we may now find the motivation to build new international institutions allowing better risk-sharing among countries. The wartime atmosphere will fade again, but these new institutions would persist."
Put another way, never let a good crisis go to waste. Or to quote Austrian economist (and post-war grumpy-chops) Friedrich Hayek:

"Emergencies' have always been the pretext on which the safeguards of individual liberty have been eroded."

Maybe we're jumping at shadows to fear state (and neighbourhood) surveillance, totalitarianism, even fascism as another outcome of how governments (and voters) are responding to this pandemic.
But pretty much everywhere, the response so far uses a big spoon of nationalism to help the patient swallow this massive dose of socialism.
All our 'total war' economy needs, in fact, is for the central banks to starting running the printing presses 24/7. And they won't disappoint. 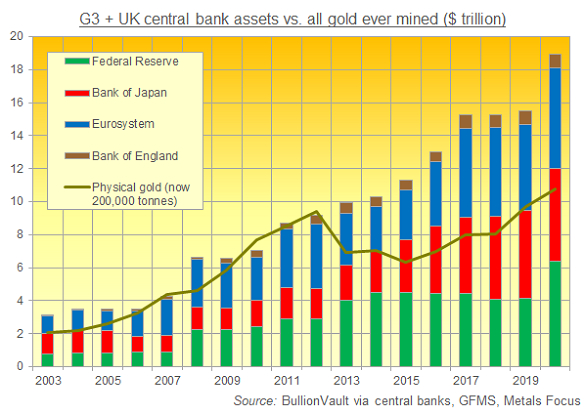 The huge quantitative easing of a decade ago didn't prove one-way bullish for gold, silver and the other precious metals.
You could even say QE worked to depress them...
...because throwing money at the markets succeeded in soothing them...
...reducing the need for a 'hedge' or insurance policy in the shape of a lump of rare metal.
But trying to look ahead...squinting out beyond this catastrophe...it's hard not to see inflation as the obvious and global solution for the massive debts now being built by sovereign states and cross-border institutions, as well as by corporations and private individuals offered at best a temporary suspension of their debt repayment schedules.
Stock markets tend to like inflation, at least at first. Hence the very quick turnaround from March's crash.
That shrug of the shoulders may prove premature. The true impact of this crisis runs far, far deeper than boosting sales at Amazon or Netflix. Deflation may still win out at first.
But if you think governments have failed to manage or control this virus crisis so far, I wouldn't bank on them keeping inflation in check once it recedes.