END_OF_DOCUMENT_TOKEN_TO_BE_REPLACED

How can the United States settle its balance of trade deficit with China...?

DO DEFICITS MATTER? Just as English missionaries were proof-reading the first-ever Chinese Bible, the British Empire found itself with a trickier kind of translation problem.

Exporting the English language to China – and a little Quaker faith besides – proved much easier than exporting British-made goods during the 1830s.

Imports from abroad, in contrast, just kept on growing as the industrial revolution steamed ahead at home, sucking in the new consumer favorites – tobacco, sugar, coffee, calicoes, porcelain and silk.

Of course, Britain owned the plantations of the West Indies and the factories of Bengal. So those deficits didn't even exist, let alone matter. But "the British were spectacularly unsuccessful in finding trade goods that the Chinese wanted or needed," as Jonathan Spence, professor of history at Yale, noted in his Reith Lectures for the BBC earlier this week.

Thus "there was the problem of trade imbalances." And stuck for consumer items to ship back across the oceans, London's merchants were forced to pay in cash.

For the British, money meant Gold, just as it did until the last gasp of the Gold Standard one hundred years later. But the Chinese wanted silver.

(They never did get round to using gold, in fact. And while Britain recovered early from the Great Depression by abandoning gold for credit-money in 1931, one theory holds that China side-stepped it entirely by sticking to its silver standard...)

So in the early 19th century, translating English pounds into Chinese yuan meant selling gold for silver, and that meant dealing on Europe's precious metals market. Paying a commission to the bullion dealers of Paris or Prussia – as well as shipping it all back and forth – only added to the cost of that yawning trade gap.

A little of the British Empire's raw cotton found a market in China, but it wasn't nearly enough to close the trade gap. Gold Bullion continued to flow out of London, enraging the "bullionist" school of economists and policy-makers, otherwise known as the "mercantilists". They feared sending gold to China a shortage of coin in the domestic British economy, plus a fall in the Pound Sterling's international value...as well as giving work to foreign laborers, and paying profits to their foreign masters...while leaving the London exchequer impoverished should it ever need to fund a military defense at home.

And so "it was this melancholy failure of the balance of trade that led to the under girding of the opium business in China," explains Prof. Spence. Opium grown in India "started to be sold to the Chinese by British traders, and later by American traders, because the West simply could not find enough products to attract the Chinese in a sort of barter exchange at the time."

Widespread dope-smoking and the social breakdown it invites rarely chimes with government policy – not domestically, at least. Opium had long been banned by imperial decree from Nanjing. But after ten years of trying to fend off Britain's drug dealers without damaging the inflow of silver, the Qin authorities finally cracked and made a stand.

The Chinese governor seized 20,000 chests of the drug – some 1,200 tonnes – landed in Guangzhou. London responded with a gun-boat. The ensuing Opium War of 1839 ended three years later with the Treaty of Nanjing, under which Britain's military might won the island of Hong Kong, plus reduced trade tariffs, freedom from Chinese law for its ex-pats, as well as "most-favored nation" status.

Whatever trading rights or concessions China would grant in future, the British Empire would also gain as well. And although opium didn't actually figure in the Treaty by name, the trade gap was closed with dope rather than hard money payments. 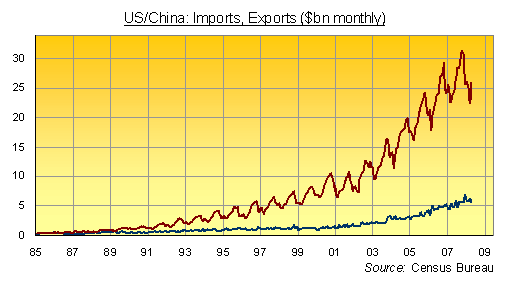 We still don't make much that the Chinese want to buy. The United Kingdom's trade deficit with China rose 8% in the year to April '08, as Chinese imports swelled by more than 10%.

But here in the early 21st century, it's America that's become "spectacularly unsuccessful" at making things the Chinese want to buy. The US is hungrier still, however, than Britain ever was for Chinese-made goods.

Yes, the value of Chinese imports to the US fell slightly during the first four months of this year vs. the first third of 2007. But US exports to China fell faster still according to the Census Bureau's latest data. So the trade gap widened again to rack up a deficit three times the size of America's debt to Canada or Mexico – the United States' No.1 and No.3 trading partners respectively.

Canada and Mexico just happen to share a land border with the States. Whereas China sits on the other side of the Pacific. But as the British Empire's gun-boat diplomacy of 1839 attests, distance means little when consumers want to buy luxury from overseas.

How to settle this debt? Today the United States ships dollars and bonds back across the Pacific, rather than silver or Gold Bullion. But are Dollar bills and Treasuries what China really wants, anymore than it wanted 1,200 tonnes of opium in 1839...?

Another $75 billion poured into the foreign currency reserves of the People's Bank of China in April according to the Hong Kong press. The PBoC pumped out $75 billion-worth of Yuan in exchange, swapping the local currency for US bills earned by those export firms bringing all this bacon home. Printing money might be cheaper than buying silver for Gold. But the translation costs of settling America's import bill still rests with China, rather than the debtor nation.

It's a major advantage of running the Dollar, the world's No.1 reserve currency...an "Exorbitant Privilege" as president de Gaulle of France once said. And Ben Bernanke's sharp cuts to US interest rates only make funding America's trade deficit more expensive again for its Chinese suppliers.

Ten-year US Treasury bonds now pay around one-third less than China's main central-bank interest rate. This gap represents an immediate loss to the PBoC – and that's even before you figure in the 20% loss in the US currency vs. the Yuan suffered by Dollar-holders in China since summer 2005.

The tide of Dollars flooding across the Pacific is also helping swell the Chinese money supply by 17% year-on-year – and with more than $1 trillion-worth of US-earned Yuan already pumped into the domestic economy, "the liquidity threat [in China] remains copious," says Dwyfor Evans at State Street in Hong Kong.

Last month's addition of $75 billion in excess cash "will make its way to domestic credit, which has risen consistently over recent years," Evans tells Bloomberg. "This opens up a potential monetary source of inflation."

What to do? Spooked by the fastest consumer price-inflation in more than a decade, the People's Bank of China just raised the required reserves ratio – the amount of cash which private banks must hold back in reserve – to a massive 17.5%. That should drain something like $58 billion from the domestic lending markets, reckons the RGE Monitor, as the Chinese authorities set about "treating the symptoms of excess liquidity."

But spooked at the very same time by the fear of a fresh slump in the over-inflated Shanghai stock market, the PBoC also continues to hold its key interest rate below the rate of consumer-price inflation. The falling yield offered by US Treasury bonds demands it, in fact. But these sub-zero real rates of interest make cash a losing asset class for China's new army of savers and investors. So funnily enough, many of them would still rather buy and hold precious metals than either Dollars, Sterling or Yuan.

China's retail investment demand for Gold rose 63% during the first quarter of 2008, reports the GFMS consultancy, amounting to 15.1 tonnes. Gold jewelry sales grew by 9% –"one of the few examples of demand increasing over 2007 levels" during the global spike to $1,000 per ounce – reaching 86.6 tonnes.

China now represents the world's second-largest gold jewelry market after India, over-taking the United States in 2007. But even at a total of 420 tonnes last year, total demand for Gold from mainland China, Hong Kong and Taiwan combined remains almost negligible on a per capita basis.

That's not to say it's sure to keep rising; but with Chinese goods now accounting for 13% of America's physical imports each month – more than Mexican goods and only just less than Canada's (including petroleum) – we wouldn't be surprised to see ever more of that wealth swapped for silver and Gold Bullion.

Because deficits do matter after all, despite what Dick Cheney claimed back in 2002 as the Dollar's 40% decline got started on the world's forex market. Not least, they matter to those countries sat at the other end of the shipping routes.

America's yawning trade gap might also start mattering to the deficit nation too, if the exporters start demanding payment in hard currency rather than low-yielding paper or dope.