END_OF_DOCUMENT_TOKEN_TO_BE_REPLACED

Perfect for parking your $64 trillion portfolio of over-priced stocks...
SO WE WERE going to look at inflation, writes Adrian Ash at BullionVault...
...but there isn't any inflation to see.
Not in the price of consumer goods in your local stores, not outside the UK at least, where the Brexit vote of 1 year ago has so far delivered nothing much beyond a whack to Sterling that matches the banking crash of 2008, the Black Wednesday crash of 1992, the IMF crisis of 1976, and our abandoning the Gold Standard in 1931.
To date this devaluation has given us 'shrink-flation' in sausages and fish fingers, with the price of lager outpacing good old British hipster ales too.
So alone in the developed world, "Sterling's depreciation has fundamentally shifted underlying inflation dynamics," said now ex-Bank of England member Kristin Forbes in her final speech as a policymaker last week.
Forbes called it "pressing" that the Bank of England raise interest rates now.
Like right now. Starting back in March, in fact.
A professor at world-leading university MIT in the States, Forbes voted to raise UK interest rates at each of her last 3 meetings as a Bank of England member.
Right at the same time, she was researching a new paper – now published this month – on how, for the import-heavy UK, "the [currency's] exchange rate is significantly correlated with movements in the slow-moving, persistent trend" of consumer prices.
So that's an independent member of the MPC...who's been researching what drives deep, underlying trends in UK inflation...who just voted again and again to raise UK interest rates...just as the official UK pace of consumer-price inflation jumps to a 4-year high.
But pah! Who believes experts anymore?
Few other Bank of England members are listening anyway. And for all their sudden chatter about 'no more rate cuts', other central bankers are a long way from raising rates too.
First that's because the credit bubble has to keep inflating if it isn't to burst. Second, there's way too much debt that needs repaying for the cost of interest to rise. And third, it's because everywhere outside the UK – well, outside war zones or Venezuela too – the cost of living continues to rise at an ever-slower rate. Meaning that interest rates need to stay low to try and get inflation going. Or so central bankers think, fixated on avoiding deflation and so helping the value of today's mountainous debts slowly erode thanks to a falling value of money. 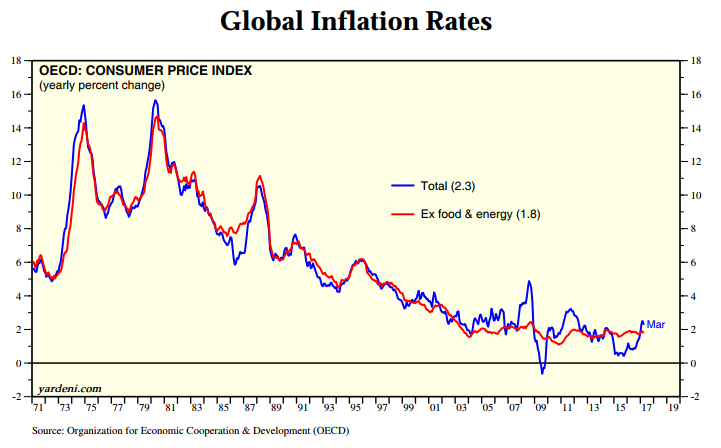 Yet despite zero interest rates, negative interest rates and all-out money creation to buy government bonds and push down longer-term borrowing costs too, inflation remains soft and softening. Except in asset prices. Asset prices keep setting new all-time record highs. Because of all that cheap money. 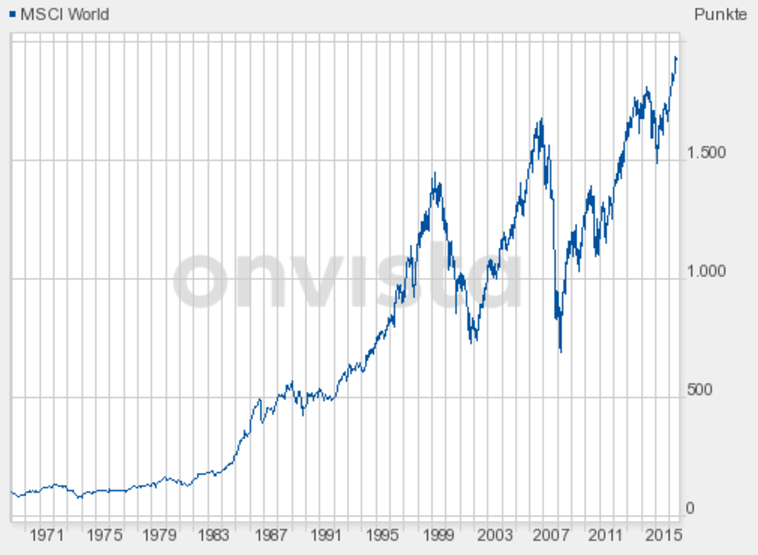 "Evidence of the impact of monetary madness on assets prices is all around if we care to look," rants French investment bank SocGen's resident doomster Albert Edwards in his latest weekly note.
"I read that a parking spot in Hong Kong was just sold for record HK$5.18 million..."
(That's $664,200 in US terms)...
"...[or] what about the 3.5x oversubscribed 100-year Argentine government bond...?
"But no one cares when the party is still raging and investors, drunk with the liquor of loose money, are blind to the inevitable catastrophe that lies ahead."
Hence the miserable forecasts for investment returns from here. Because with prices already at record highs – valuing the world's listed business above $64 trillion for the first time in history according to World Bank data, and putting yields and dividends therefore at or near record lows in percentage terms – the outlook is glum. Really glum.
These 2 charts, for instance, show you what kind of total returns history says you can expect from investing in the stock market between now and 2027.
Or you could just look at how expensive equities have become in terms of corporate earnings, and think about what's likely to come next. 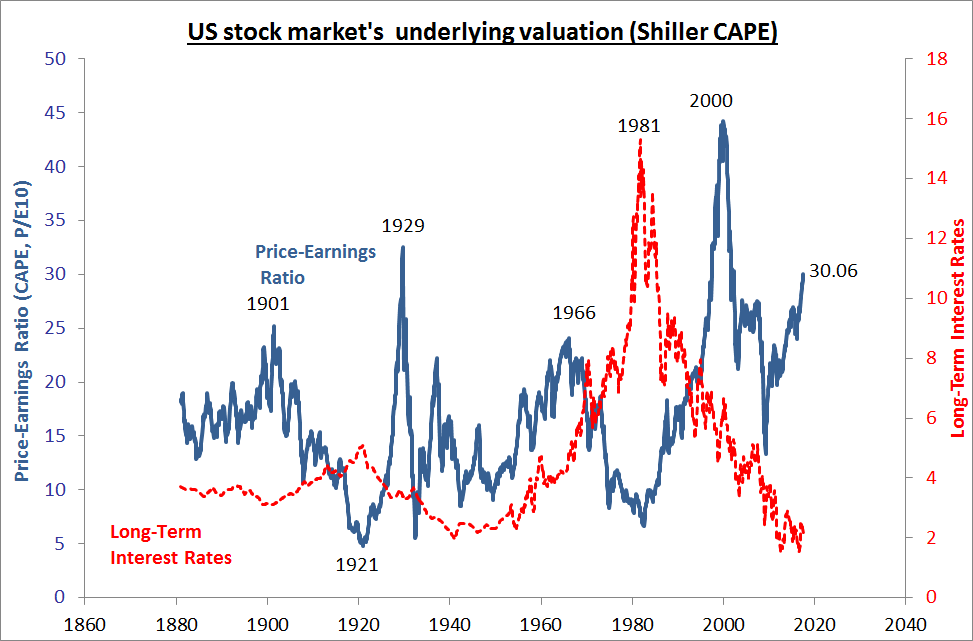 Currently showing an underlying price-to-earnings ratio above 30, US equities have only been more expensive in 57 of all 1,758 months since 1871, according to the data from US academic Robert Shiller posted at Yale University.
Specifically, that was in August and September 1929 – right before the Great Crash slumped into the Great Depression – and then all through mid-1997 to early 2002, the peak of the financial world's last tech-fed "irrational exuberance".
Buying stocks in those months meant, on average, delivered real total returns over the following 5 years of minus 12%. That's including dividends and accounting for inflation. Holding on for another 5 years then helped claw a bit back, dragging your average annualized return – again, including dividends and after inflation – up to just over 1.0% per year if you'd bought the US stock market a decade earlier at that ear-bleed price of 30 times underlying corporate earnings.
Which is where stocks now stand again. Edwards at SocGen:

"After the [global financial crisis], central bankers have collectively spent the last decade stepping up the pace of money printing to new extremes...[but] it may well be their own easy money and zero interest rate policies that are actually causing the stagnation in growth while at the same time wealth inequality surges to intolerable heights.
"The problem...in creating asset bubbles to try and reflate the economy is that when the asset bubble bursts and blows up the economy, you are more likely to get the very deflation out-turn that you were seeking to avoid in the first place."

Boom leads to bust, in other words...fuelled as ever by cheap money.
For better or worse, world stockmarkets last week edged away from this month's fresh all-time highs. Precious metal prices are struggling near multi-month lows.
When this 'everything' bubble finds its pin however (and it is when, not if) then history says central bankers will respond by pulling the biggest lever they can find marked 'All-out QE money creation'.
Because there's nowhere left to go lower with interest rates. Not unless they go below zero on your bank savings rate to try and stoke spending and inflation directly by destroying your money.