END_OF_DOCUMENT_TOKEN_TO_BE_REPLACED

What Tokyo's stock bulls know about this "rare" buying signal...

AT THE START of this week, stocks on the Dow Jones, Tokyo Nikkei and FTSE100 in London offered a bigger dividend-yield than you'd earn in interest from their local government bonds.

"That's pretty rare, and in general has been quite a good indicator of turning points in the markets," notes the Financial Times' investment editor James Mackintosh. But it only looks rare if you ignore most of history. And it's only screamed "Buy!" once on Wall Street, back in winter/spring 2009. 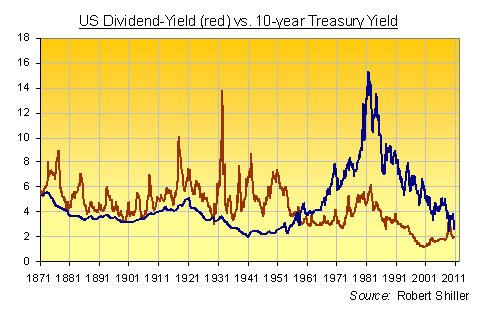 Yes, this "signal" worked, notching up a 100% strike-rate for the last fifty years. But buying stocks today because their yield (only just) beats bonds might prove ill-timed if not a disaster.

For at least 75 years prior to the late-1950s, US stocks consistently paid more than 10-year Treasurys. Rather than being an eight-decade-long buy signal, however, "That was the relationship ordained by Heaven," as the late Peter Bernstein learnt from his senior partners on Wall Street.

"Because stocks were riskier than bonds and should have the higher yield."

On a monthly basis in fact (pace Robert Shiller's data), US equity yields offered investors 1.78 percentage points above Treasury yields between 1871 and 1957, with this "div-yield premium" rising from a long-term average of 1.30% to 3.02% as the Great Depression morphed into WWII and equities got riskier still.

Only twice did equity yields fall below bond yields – first in March-May 1872 and then again in July-Sept. 1929. That anomaly first marked the start of a five-year bear market, and then of the Great Crash itself. Here was a sell signal even Ken Fisher could see.

No, it wasn't infallible. Like the inverted yield curve forecasting recessions, near-zero Div-Yield Premiums forecast three bear markets that failed to show (Jan. 1890, mid-1899 and spring 1905). And picking the peak in Div-Yield Premiums was a tough buy signal to follow, as the variance in our fourth column shows.

But for 60 years, every significant top and bottom in US stocks was indeed marked by a relative extreme in the Div-Yield premium, at least until the signal broke down – and stocks kept paying ever-more over bonds – in the Great Depression. 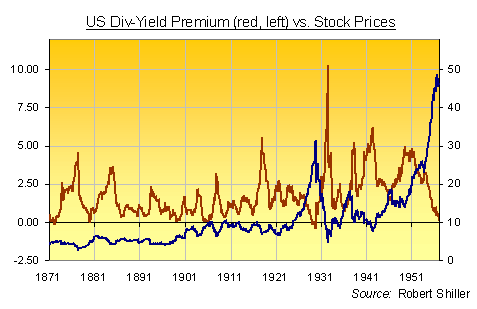 So what of 2010's return to pre-Buddy Holly conditions? No idea, to be honest. Not with the UK's long Bank Holiday weekend beckoning. But we might get a quick clue from asking first: Why the late-50s' switch?

The Great Depression, of course, was finally becoming faint memory, as was its record of destroying stockholders while handing deflationary gains to fixed-income bonds. Second, the idea of growth-stock investing – propounded by youngsters like Peter Bernstein himself – was starting to take hold, slowly mutating into the "cult of equity".

But a third (and more critical) change, however, was in the underlying promise of return on versus return of your money. Because where risk-capital was formerly known as "equity", government bonds were fast on their way to becoming "certificates of confiscation" as the long post-war inflation took hold. So you could even put the switch down to the slow death of that natural deflation built into the Gold Standard (or rather its step-nephew, the Gold Exchange system), starting at the very same time as US stockholders kissed goodbye to earning a premium each year above Treasury yields.

From that year – 1958 – until 1971, "There was not one year," says Texas professor Francis Gavin, "when the Dollar and gold problem was not the most pressing issue of American foreign economic policy." Because America was flooding the world with Dollars, which the world in turn kept exchanging for Gold Bullion, draining Fort Knox until Richard Nixon closed the Fed teller's window and the US finally abandoned its $35-per-ounce currency peg.

Lacking all gold-backing today, it's plain to see that the relationship between stock and bond yields was snapped in half five decades ago. And whatever snapped it is now at stake again. 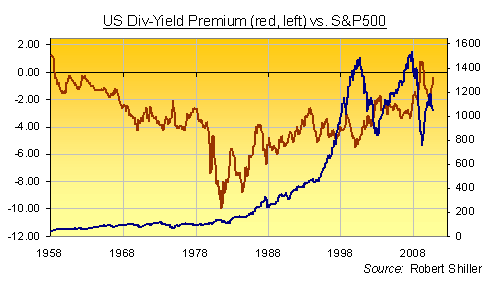 That's an ugly warning, in short, from the "deflation nation" everyone fears the US is aping. But to date, as the latest US housing, jobs and GDP data show, printing money has only stalled the post-bubble deflation, not reversed it.