END_OF_DOCUMENT_TOKEN_TO_BE_REPLACED

Cash is trash says gold and the stock-market boom...
IS the STOCK MARKET living in a parallel universe? gasps Adrian Ash at BullionVault.
Nothing like this global shutdown has ever happened before.
Economic activity has crashed into a wall of stay-at-home rules and socially-destructive social distancing.
Yet here we are...watching the stock market rally hard yet again today...
...even as the data and the outlook paint an utterly "bleak picture" as the latest monthly report from Germany's central bank the Bundesbank puts it.
Compare and contrast the Great Depression of 9 decades ago...the worst economic slump of modern times (so far).
Prompted by the slump in US stock markets of 24 October 1929, "Perhaps never before or since have so many people taken the measure of economic prospects and found them so favorable as in the two days following [that Thursday's] disaster," wrote J.K.Galbraith in The Great Crash.
But then, "On Monday the real disaster began."
If you like a little symmetry in your history, how about this?

Spooky. Dow and Nasdaq went on to drop 86% and 74% from those initial bear market rallies.

But so what?
"Human ingenuity will allow for a gradual resumption of economic activity," reckons investment advisory Evercore ISI's Dennis DeBusschere.
"We lean toward positive outcomes" as the world moves to re-opening, he says.
Or maybe he just means this. 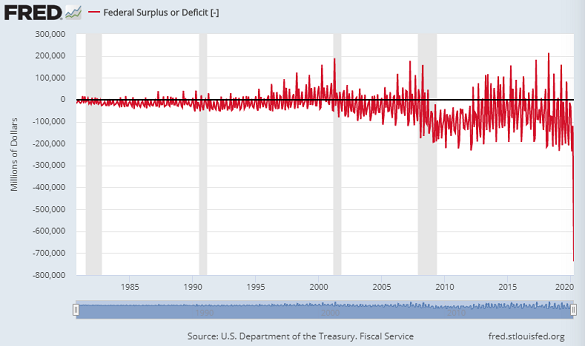 Oh sure, the re-opening is coming.
Because after the social shutdown comes the economic imperative...
...plus government deficit spending which, on March's US data alone, equalled the previous 6 months of Washington's budget shortfalls between revenues and outgoings combined.
Today's national and international governments will spend! Spend! SPEND! to try and keep as many people safe, well and long-lived as possible, overturning this 21st Century plague's push to make life nasty, brutish and shorter once more.
That's going to need some heroic bond-buying by patriotic investors. Even if they don't lose their nerve, central banks are mobilizing their big guns too of course... 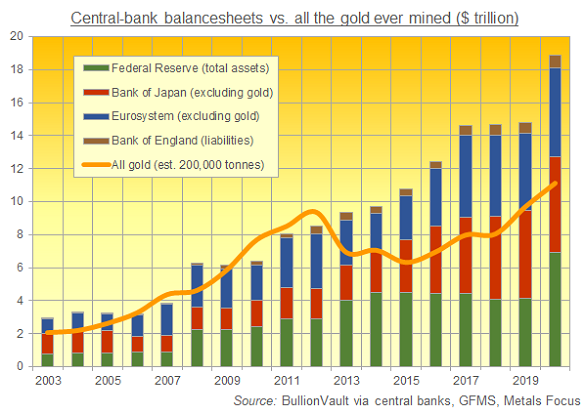 ...because while re-opening means next month's economic data are likely to show an easing or even a bounce from March, April and May's catastrophe, the brute fact of what has happened is going to leave a scar like no other.
BullionVault clients got to catch up with all the latest data in our Weekly Update email on Monday...the first edition for which we've found time to compile our usual data updates since this crisis crested and broke upon the world.
For a taster of the soul-cheering facts our updates reveal, how about these sweet little nuggets of joy for equity investors?
And the great news keeps coming.
Already this morning we learn that, on top of 1-in-4 UK workers temporarily laid off in April...meaning 6.3 million people are relying on the tax-funded furlough scheme for income...a further 856,500 lost their job altogether and so applied for unemployment benefits.
Such cold, hard data aren't neutral of course. These numbers are as politically charged as they are dreadful.
The UK's Office for National Statistics, for instance, delayed a report on Covid-19 deaths by occupation by 4 days...
...releasing its findings (that low paid and unskilled workers are far more likely to perish) only after the Government started to urge low-paid, unskilled people back to work.
Away from the numbers, the geopolitical outlook for a resumption of strong economic output and trade is looking pretty bleak too as China tries to duck blame for SARS-CoV-2 and the resulting havoc it's led politicians everywhere to impose.
US President Trump is weaponizing the federal pension fund...ordering it to get out of Chinese assets...
...while Beijing is actively bullying Australia by shutting out 35% of its beef imports.
Or try these happy thoughts on higher education...with only elite colleges fit to keep teaching and only thanks to a fresh land-grab of humanity's intellectual and emotional life by the ones and zeroes fed through your wi-fi...or the fact that Big Oil producers are suddenly applying the phrase "Peak Oil" to talk about demand, not supply, showing just how dramatic this end of the world as we knew it is set to prove.
Yes, the stock market is supposed to be a forward-looking machine. It takes today's data, and tries to look beyond...out into the future.
And yes, maybe the stock market is right. Maybe the unprecedented borrowing, printing and spending now underway from governments the world over will more than outweigh this historic hit-the-wall economic depression.
But if you think New Year 2020's price/earnings ratio of 31 for the US stock market looked rich compared to its historic average price of 17 times earnings, wait until you see what's coming for 2020's corporate profits. 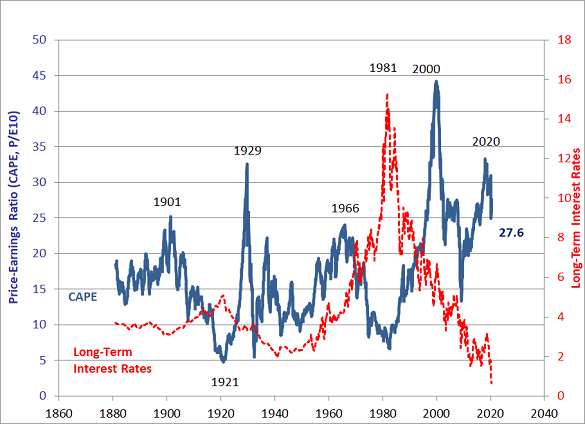 Whatever it is that equity prices think they see coming looks a long way from what the gold price suggests, way up here at fresh all-time highs in terms of every currency bar the US Dollar and Japanese Yen.
Stocks and gold can't both be right. Not unless gold buyers and equity bulls alike simply see cash as trash, and are now racing to get rid of currency at any cost as governments everywhere rush to destroy it in the name of fighting the deflation they have imposed to fight the virus.
To quote ourselves from a decade ago:

"Like everyone agrees, 1,000,000% inflation looks a long way off right now. But no central bank ever began a hyper-inflationary policy because it feared inflation. Such disasters always come because of vanished credit and economic depression. And whether in Germany nine decades ago [now 10 of course], or in Argentina [30] years back, or in Robert Mugabe's Zimbabwe around the turn of this century, stuff actually gets cheaper – not more expensive – in real terms during hyperinflation.
"It's just that the...currency falls in value faster still, turning the 'money illusion' we're all prey to into a livid nightmare."

Can't happen here, not now. Right?
Because you also need to lose a big war, as hyperinflation naysayers always like to add. Besides, pension funds and other massive investors just can't get enough government debt right now, they love the stuff. And it's not like anyone is actually "printing" bank-notes by the wheelbarrow anyway.
Instead, we only saw 30 central banks cut their interest rates in April. So far in May the world has seen a further 10 policy-rate changes, all of them also cuts. Add the huge balance-sheet growth shown vs. the value of the all the gold ever mined in the world above, and the fact is that cheap money can, apparently, cure anything.
Y'know, just like bleach and hydroxychloroquine can. Only in much bigger quantities.