END_OF_DOCUMENT_TOKEN_TO_BE_REPLACED

Plastic face, can't smile, white out...
SO EVERYONE agrees this is nuts, writes Adrian Ash at BullionVault.
But no-one wants to do a damn thing about it.
Sound familiar?
"Record number of fund managers consider equities overvalued," says the latest Bank of America-Merrill Lynch survey.
Over-valued you say?
That must be why fund managers keep pushing stocks higher...bidding them up to fresh record highs in the US and UK...with prices measured against business earnings starting to run piping 'hot, Hot, HOT!' across Europe and now even Asia when you strip out the big, boring utilities. 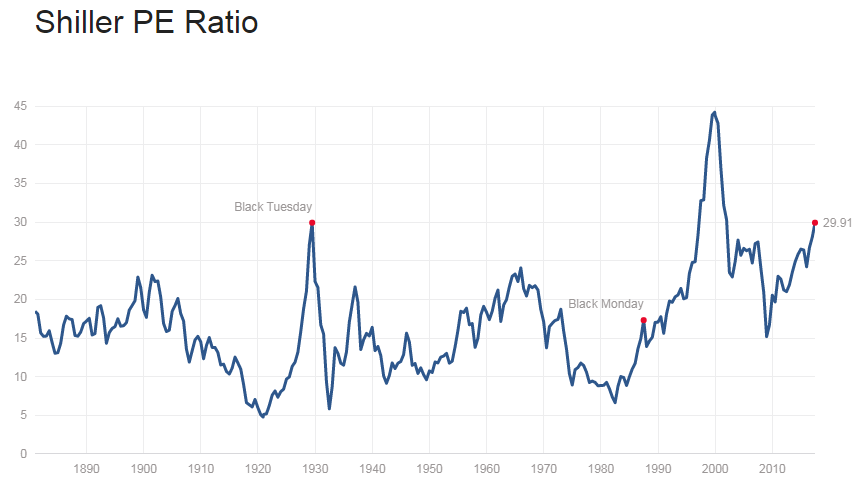 But as Chuck Prince – then head of bloated US finance giant Citigroup – said 10 years ago:

"When the music stops, in terms of liquidity, things will be complicated. But as long as the music is playing, you’ve got to get up and dance. We're still dancing."

Complicated, did you say?
That was in July 2007. Come November, Prince was forced to resign...as sub-prime and other mortgage-bond losses hit Citi's shareholders with a writedown for the 3rd quarter alone of $6 billion.
Two months later Citi wrote down a further $18bn for the last 3 months of 2007...with a sum nearer $40bn wiped off Citi's books by the time the music stopped screeching nothing but Bernard Hermann's violins from the shower scene in Psycho, roundabout the start of 2012.
Early gold investors, as you'll recall, got the chance to sell at prices 3 times the metal's 2007 level. But Chuck Prince still did better...collecting a $12 million 'exit bonus'...plus a $1.5m pension...
...plus he got to keep the $53m or so he'd already accumulated in pay since taking over as Citi boss 4 years before his infamous 'dancing' quote.
And some people wonder why other people might vote for a Bernie Sanders or a Jeremy Corbyn, or a Marine Le Pen.
Politics aside, the problem for investors and savers wanting to invest or save today is trying to spot what might burst the 2017 bubble. Indeed, where has that bubble most inflated prices?
First, this cannot prove a replay of the financial crisis starting 2007. Because where the US sub-prime mortgage market dug so much investment landfill for idiot German banks and bond buyers to fall into a decade ago, the Western world's financial and household sectors aren't leveraged anywhere close today.
So second, today's relatively tame banking and global housing bubbles – tame thanks to their wipe-out a decade ago, repeating the way Lloyds Bank couldn't ride the infinite credit bubble of 2002-2007 thanks to its ball-and-chain purchase of Scottish Widows in 2000 – means the economic fall-out should feel gentler. The financial crash, on the other hand, could prove historic.
Yes, the crypto-currency bubble clearly echoes the DotCom Bubble which burst early 2000 (not least because it might precede a less frantic but more world-changing impact, like the 1720 South Sea Bubble did for government bonds, or the 1929 Great Crash did for investment trusts).
And yes, the formerly 'internet' stocks now called FANG (that's Facebook, Amazon, Netflix and Google to you, granddad) also look ripe to lead the looming stockmarket crash. If only because every fool fund manager has to own them – no matter how poor their yield – to keep pace with the fool benchmarks those giant shares now lead.
But it's not just in technology or consumer-website stocks that today's bubble is looking for a pin.
Real estate, fine art, student loan-backed bonds, rare wines, infrastructure projects, fast cars...pretty much anything a salesman can call an 'asset' has bubbled and frothed as the wider financial world has climbed back off the floor and begun dancing again.
Call it the 'everything bubble' as one BullionVault user put it to me last week – a boom in all asset prices, set for a universal wipe-out the instant that the confidence fairy goes missing.
So when is the crash?
Well, the US Fed, as gold prices showed last week, is pushing on with its gentle interest rate rises. And the job of central banks – as boring, old analogue people once thought – used to be to "take away the punchbowl" just when the party was getting started.
Raise rates when everyone gets a bit crazy. Turn on the lights and send everyone home if heavy petting breaks out.
But since the DotCom Crash, and most especially since the 2007 subprime bust became the global financial crisis, central banks have instead tried to revive the party-goers, no matter how tired or wasted.
A little pick-me-up here, a big fat hair-of-the-dog there...and pretty soon it's plastic face, can't smile, white out.
"You’ve got to get up and dance" isn't a throwaway phrase from an over-paid banking exec anymore. It has become monetary policy everywhere, shouted and screamed at the poorest party-goer as well as the most strung-out fund managers.
So what happens when this party-hard crowd...created by the Fed, Bank of England, BoJ, ECB and the rest...really has had too much, and goes into toxic shock if not cardiac arrest?
The crash, says history, will be one for the history books. Circling it on a calendar in advance, however, is impossible.
Time it too late, and you'll be trying to get out at the same point as everyone else...lacking a bid for your shares, fine art and rare stamps just as gold prices (potentially) soar.
But time it too early and you risk missing out on the last few percentage points at the top.
You've got to keep dancing, in short. That was Chuck Prince's dilemma 10 years ago. It's what keeping the markets punching the air today.