END_OF_DOCUMENT_TOKEN_TO_BE_REPLACED

Deflation in all things except inflation – welcome to Stagflation 2010...

THEY WERE SUPPOSED to avert depression, writes Adrian Ash of BullionVault. The Bank of England continues to tout their "success".

But it looks like the best hope for money-printing and zero rates now is to give the UK Seventies-style stagflation, plus '30s-style wealth destruction with a glacé cherry on top.

In short, we've now got deflation in everything but the cost of living. Monetary theory can't bear this impossibility, but it's cash savers, retirees and wage-earners outside finance who have to try and live with the reality.

Even the money supply is shrinking...deflating by £22 billion in December. All the Bank of England has achieved with its money printing is the worst of all worlds.

Putting the "stag" into stagflation are economic output, wages, capital investment, real estate prices and now, perhaps, a return of the bear market in London shares. Whether or not GDP shows an uptick for the end of 2009, this is the deepest British recession since 1931. Business investment sank to a 6-year low on the latest quarterly data, and the number of people out of work for 12 months or more has risen by two-thirds since Northern Rock was bailed out, breaking the dam of bail-outs worldwide in late 2007.

Stepping in with a very 21st century version of drowning, not waving, "The number of people in part-time employment increased by 99,000 to reach a record high of 7.71 million" between Sept. and November '09, says the Office for National Statistics. "There were 1.03 million employees and self-employed people working part-time because they could not find a full-time job...the highest figure since records for this series began in 1992."

Growth in the money supply, meantime – while not quite negative, which is required for the technical text-book definition of "deflation" – has slumped to a 5-year low. But not without the Bank of England doing its damnedest to reverse course... 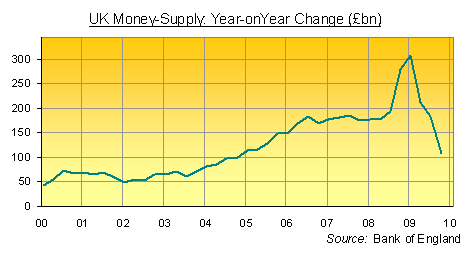 Giving us a whole heap of "flation" to add to our "stag", interest rates at 0.5% – plus quantitative easing of £200 billion...almost entirely used to finance the government's record peace-time deficit – just saw the cost of living jump at its fastest pace ever on the UK's official measure.

And wasn't deflation in all things except the cost of living supposed to be impossible...in just the same way that "pass through" from Sterling's fastest-ever decline on the currency market wasn't supposed to show up in consumer prices but only in booming export sales – down 14% year-on-year at last count?

Even as the money supply shrank at its fastest pace on record, inflation on the High Street leapt last month from 1.9% to 2.9% year-on-year according to the Consumer Price Index. The older, more trusted Retail Price Index reversed its 4% slump of late 2008 to stand near new all-time record highs, while the RPI excluding mortgage costs (neatly slashed on the official data, if not by High Street lenders) rose 3.8% from a year before, returning to levels last seen during the commodity-price surge starting in 2006.

Exclude house prices, in fact – only half-way through their typical post-bubble slump – and UK inflation just reached a two-decade high outside the oil-price spike of summer '08.

Is this inflation helping reduce the real value of the UK's famously world-beating debt burden? Sadly not. Inflation only cuts into the real value of debt if your earnings rise in nominal terms, allowing you to repay yesterday's spending with a bigger chunk of today's devalued money. Across the whole economy, and including bonuses, wages crept 0.7% higher in the year to November, the latest official data claim, but the average hides the horror. Because in the private sector – as opposed to the printing-press fueled state sector – wages actually fell, shrinking 1.0% on average for the 12 months to December from a year earlier.

Now factor in the cost of living for workers not closing a house-purchase last year (i.e. almost everyone), and that handed a net loss of purchasing power of almost five pence in the Pound to workers outside the state.

Deflation in nominal wages plus inflation in costs equals the worst of all possible worlds for tax-paying earners trying to save for retirement. But things are equally gruesome for those folk drawing an income off what they put by in the past. Because the cost of living in Britain has now doubled inside 21 years, and for the second-half of this "Great Moderation", bank savings rates struggled to stay ahead of inflation. The latest data only confirm what savers and retirees buying gold guessed back when the financial crisis began.

They're getting killed to save the housing market and recapitalize the banks. Which isn't working, in fact. But the Bank of England is happy to slit their throats regardless. 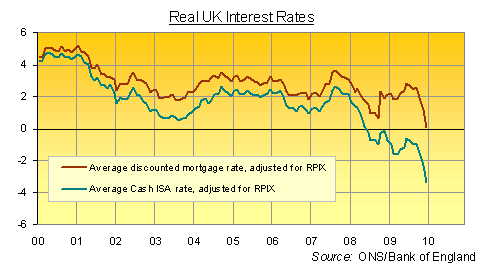 Monetary policy did nothing for Britain's housing-market turnover in 2009. The number of new home-purchase loans was unchanged from 2008, holding 60% below the approvals' peak of 2006.

But with the rate of inflation jumping last month – and set to jump again after VAT returned to 17.5% on New Year's Day – the average discount mortgage (if you can get one...which you can't) is now, at last, cost-free when you account for the cost of living. Tax-free cash ISA savings accounts, in contrast, have been paying less than zero after inflation since June 2008. And the real rate of interest slumped to '70s-style sub-zero returns as 2009 slouched towards Christmas.

We expect policy in 2010 to continue favoring home-buyers and spending over retirees and savers...even as home-buyers and spenders suffer deflation in income. Everyone loses as we revert to all bust and no boom, baked into the crust by politics Keynesian consensus and the Bank of England's executive faith in the power of money-printing to redeem the economy.

The Old Lady created twice as many Pounds in the last 10 months as the entire UK money-supply grew by in the first 11 months of 2009, the excess going to overseas bond-holders to finance the government's record peace-time deficit. Naturally, the value of Sterling has dropped as its supply has swollen, both against other currencies and gold bullion. But any hope that the new inflation data might see cash savers benefit from rising interest rates – let alone the end to quantitative easing scheduled for next month – looks premature.

What to do? Swap Sterling for Gold...? It worked for nine years last decade, and that was before stagflation, deflation and inflation struck all at once...back before the Bank of England began printing money to finance the state, looking for all the world like it's actively bidding to destroy the Pound.

How best to Buy Gold today? Queen's Award winner and UK market-leader, BullionVault is the "absolute No.1!" according to German investment advisors Kapital & Steuern. Find out for yourself, starting with a free gram of gold, at BullionVault now...