END_OF_DOCUMENT_TOKEN_TO_BE_REPLACED

2021's biggest bull market? Humbug...
To MISQUOTE the late, great Milton Friedman, money is always and everywhere a political thing, writes Adrian Ash at BullionVault.
And here in 2021...
...with inflation hitting 3-decade highs in the USA...
...while the Federal Reserve keeps rates at zero and pumps $120 billion each month into the financial markets...
...the politics of money are going primetime.
"Our currency is not current," says movie director Spike Lee in a new online advert he has directed.
"Old money, as rich as it looks, is flat out broke.
"Don't believe me? I've got the receipts. They call [banknotes] green, but it's only white.
"Where's the women? The black folks? And the people of color?
"Native Americans got a nickel. A nickel!"
Yes, it still matters whose face adorns whose money, just as much as it did when Rome's new emperor Vespasian hurried to the mint in Antioch from Egypt in AD 69.
Online banking, contactless payments and the slow death of cash haven't changed that.
Nor is the stale, pale and male problem of Western banknotes in any way unique to the faces on Uncle Sam's money either.
British shoppers and savers will remember the outcry (and foul misogny) that greeted the 2013 attempt to put a woman other than Her Majesty on the UK's banknotes.
They might also recall the sop thrown at anti-racism campaigners last year when long dead white  painter J.M.W.Turner was put onto the £20 note.
Because hey! At least he didn't seem to like slavery much. Even if he did drink tea with sugar like that dreadful Jane Austen did.
Spike Lee's solution?
Crypto, of course.
"Old money is not gonna pick us up," says Lee. "It pushes us down."
"New money is positive. Inclusive. Fluid. Strong. Culturally rich."
No doubt that's why he's dressed up as a circus showman, if not a snake-oil salesman, standing outside the New York Stock Exchange.
"What is being advertised here?" someone asks.
Coin Cloud is the answer.
"Every Coin Cloud digital-currency machine empowers you to quickly and easily buy and sell 30+ virtual currency options with cash," says its own PR.
Other such kiosks are available. They "make it possible for customers to purchase up to $5000 in Bitcoin in cash without an identification card or bank account," says one analysis.
For some reason that no one seems to understand, "Toledo is full of them. Northwest Ohio has one of the United States' largest concentrations of Bitcoin dispensers. Cash2Bitcoin has 20 machines in Ohio, with one in the Cleveland area and the 19 others in northwest Ohio. Thirteen are within 12 miles of One Government Center. And this is just one vendor."
Coin Cloud joins this list thanks to a founder who, in his own words, "moved to Las Vegas to play poker competitively and that led me to become interested in Bitcoin."
No, his new venture doesn't spit out casino chips, even if crypto is "better than a lottery ticket" to quote another sleb' promoter, Mark Cuban, back when Bitcoin was 85% above today's 1-month low and Doge was about to double in a week before crashing by three-quarters.
Rather, "Coin Cloud is a machine," says someone else, "where you put in your 'old money' (AKA money) and it gives you pretend money that you can only really hope to sell to other people wanting pretend money."
But hey, haters gonna hate, right?
Even people who used to love crypto. 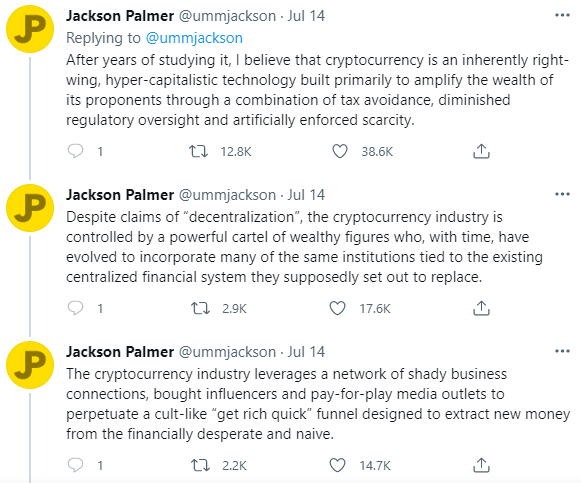 Jackson Palmer helped flood the world with the face of a Shibu Inu dog after launching comedy-crypto Dogecoin with a friend back in 2013.
It was just for the LOLZ at first. Then they did some charity work, pooling money to share with other Dogecoin owners who lost out to an e-wallet scam, and also raising funds for clean-water projects in Kenya, plus sending the Jamaican bobsled team to the Winter Olympics in 2014.
But then he sold his Doge, and now apparently he is just another "Marxist" – the very worst thing that a lot of the press and social media now thinks they can ever say about another human being.
Bad actors and scammers will meanwhile flood into any bull market. And using race to promote, push or exclude people from financial schemes isn't new either.
Black farmers in the USA, for instance, "are far behind in obtaining grants and loans" says everyone who looks at how the Department of Agriculture has worked and still works today.
Yet in trying to right that wrong – earmarking new loans specifically for black farmers – the Biden White House has walked slap into the same anti-discrimination laws which it claims it's trying to augment.
As for Coin Cloud, "Digital currency is viable for not just people of color," says Spike Lee, "but for anybody who has been historically excluded from traditional financial systems."
Put your Ben Franklins in. Take out crypto. Pay a commission to help cover the (so far unknown) costs of hiring Spike Lee and a host of celebrity and activist friends to recruit you.
Controversy meantime dogs the very male and pale world of central-bank finance right now.
"Truly extraordinary times," says one pundit...
...summarizing the 2021 battle of the Old Money promoters...
"...when left-leaning economist Larry Summers goes around warning about high inflation risk while right-leaning peer Ken Rogoff says Don't panic: a little inflation is no bad thing."
Maybe this split is more important than the battle to put more crypto-cash-points into America's convenience stores.
Most of all, quantitative easing is coming under attack even from some of the very people who began it! 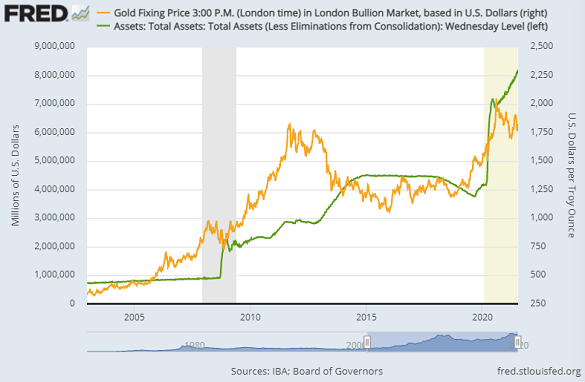 "The scale and persistence of QE requires significant scrutiny and accountability," says Lord Forsyth of Drumlean, Chair of the Economic Affairs Committee.
"The Bank of England has faced few questions until now. Going forward, the Bank must be more transparent, justify the use of QE, and show its working."
That Committee counts former Bank of England chief Lord (Mervyn) King among its members. QE began on his watch. Indeed, he threw his intellectual heft at driving the idea into reality along his old university colleague Ben Bernanke, then head of the Fed.
So maybe Forsyth of Drumlean could have simply asked King of Lothbury to explain.
King was after all part of the very Committee which researched and wrote this new report. And "Quantitative easing will work," King told the BBC a decade ago, back before he won his ermine...
...explaining when he was boss of the Bank of England why QE was needed, rather than demanding answers from the Bank today.
Maybe King didn't know what he was doing a decade ago? If so, such humbug then barely registers against the scale of humbug today. A little like QE, in fact. And fraud.
"In a world of secular stagnation there are fewer legitimate business opportunities," wrote Marxist economist (and Investor's Chronicle tipster) Chris Dillow recently.
"That diverts some entrepreneurs towards crime."
In financial markets, the same thing. "Historically, high asset prices have been a sign of optimism and of confidence in economic growth...[but] high prices today, by contrast, are a sign of pessimism.
"The valuations of US big tech betoken a belief that monopoly power, that enemy of economic growth, is here to stay. And the (now-deflating) boom in crypto-currencies was (is) founded in part on the view that people would lose faith in fiat money, something only likely in a severe economic and political crisis."
Either way, and with book publishers now spitting out new hardbacks on the topic seemingly every week right now, the politics of money look set for primetime just as the world marks 50 years since US President Richard Nixon shut the gold window and made the world's money utterly weightless.
Crypto wouldn't exist without that shift. Nor would QE. And nor would the gold market as we know it.
No one would need it. Nor would any government allow it. Not with money fixed to a certain quantity of gold. Which it hasn't been for 5 decades.