END_OF_DOCUMENT_TOKEN_TO_BE_REPLACED

Four crucial twists in the case for inflation-friendly, growth-friendly silver...

CASH-in-the-BANK is the nearest thing to "risk-free" that the finance industry offers. But bank savings now mean "sure-fire loss" thanks to sub-zero real rates of interest.

The longer that interest rates stay below inflation, the more people will be forced to take more risks to defend what money they've got – and one higher-risk choice is Buying Silver. It's slowly becoming ever-more popular, at least amongst that handful of savers and investors who see tomorrow's inflation in today's monetary policy.

Here at BullionVault for instance, and over the last 12 months or so, we've had more than 250 customers ask when we'll offer silver alongside our gold-dealing and ownership service. No other single comment or query from our 16,500 users comes close. So now, our new silver market means you can trade physical bullion – at live Silver Prices – and store it securely at low cost in specialist, private vaults outside the banking sector.

You can start with four grams of silver today, if you wish. You'll be free of credit-default or bank-counterparty risk, leaving you exposed solely to the Silver Price.

Before you register though, just why might you want to buy, own and trade physical silver anyway? 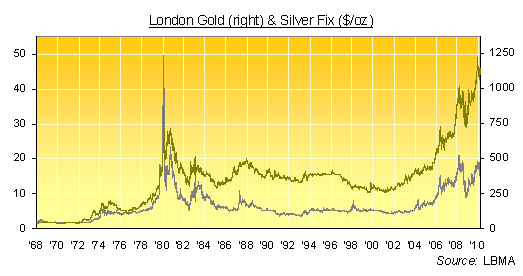 The case for gold is increasingly plain, as Société Générale strategist Dylan Grice notes in his much-quoted Popular Delusions this week.

Sub-zero real rates of interest, plus huge and irreversible government deficits – funded by central banks printing cash – make this rare, internationally recognized and tightly supplied monetary asset as highly appealing as a store of wealth as it has ever been through 7,000 years of known history.

Silver, on the other hand, was ousted by gold bullion as the world's monetary anchor in the mid-to-late 19th century. But it remained a medium of exchange well into the 20th century, and long after gold had vanished from sight too, buried in central-bank vaults to be represented above-ground by paper notes only.

Because silver is more than 17 times as plentiful as gold in the earth's crust, its use as money – both in coin and as a measure of value – is far more common in the historical archives as well. Whereas today, it holds much the same basic appeal as gold, but with four crucial twists:

#1. Gold/Silver Ratio
Historically (meaning from the dawn of recorded time to around 1900), one ounce of gold typically bought 15 or 16 ounces of silver, and pretty much everywhere in the world too. Today, that ratio stands at 65 times in the wholesale Spot Gold and silver bullion markets. (It's very much worse again if you're trading small bars and coins, thanks to dealer mark-ups and margins.) Many analysts and investors now expect the ratio to fall back towards its long-term mean, if not quite reach it. Even the 20th century average would see silver doubling in value against gold – which itself, of course, plenty of people now see going higher against the Dollar, Euro and Pound Sterling anyway.

#2. Consumption
Whereas pretty much all the gold ever mined in history is still available – closely guarded but ready-at-hand as jewelry, bars and coins – silver is somewhat closer to commodities like crude oil, soybeans or orange, in that it often vanishes in its use. Consumption rarely affects gold, but silver's lower value means recycling and recovering it isn't always economical. And because it tends to be a by-product of other mining operations (mostly gold or copper), rather than dug up for its own sake, analysts don't see silver's primary supply as responsive as gold or base metals to changes in price.

#3. Industrial Demand
Unlike gold, silver is predominantly used by industry today. So rather than offering deflation protection (as gold most recently did after the collapse of Lehman Bros.), silver is strictly inflation-friendly, with a number of fast-growing uses in both developed and emerging economies making it look very growth-friendly, too. Excluding silver investing demand, London's VM Group analysts now forecast an additional 350 million ounces of annual silver demand by 2020 thanks to:

All this growth might soon eat itself, of course, if industrial demand forces silver prices sharply higher. But VM's forecast compares with total industrial demand of 450 million ounces in 2008, according to the mining-backed Silver Institute. Meaning the case for silver doesn't rest solely on monetary chaos.

#4. Volatility
On average, and across the last 42 years, a 1% move in gold is matched by a 1.75% move in silver, both up and down. Anyone expecting strong gains in gold, in other words, should expect exaggerated gains in silver, but with greater risk. Just check the spike of January 1980 for proof. Gold prices tripled in the last 6 months of the preceding year, but Silver Prices rose 5.7 times over, peaking at $50 an ounce. The subsequent drop was just as severe, and much longer-lived.

What makes silver prices more volatile than gold? As US oil tycoons the Hunt brothers found when they very nearly cornered the world's near-term silver supplies and forced that $50 peak 30 years ago, silver is a very much smaller market by value. The wholesale bullion market in London – heart of the world's gold and silver trading – turns over 18 times as much money in gold as it does in silver each day. Physical demand each year, though nearly 8 times larger than gold by weight, is estimated to be worth barely 11% of global gold demand at $15.2 billion.

Moreover, within those annual figures, gold's use as a store-of-value (meaning investment bars and coins, plus jewelry) accounts for 87% of annual demand according to the GFMS consultancy. In the silver market, only 35% of annual off-take goes to storing wealth (investment, jewelry, silverware). That makes silver much more dependent on industrial demand, and explains why – very occasionally – it more closely tracks movements in the price of copper than gold.

Still, investors aren't (or shouldn't be) looking for "diversification" when they add silver to their gold holdings. Not in the sense of diversification that your financial advisor would use, just before you remind how much you're losing in the bank and how much you stand to lose on bonds should inflation take hold. The average daily correlation between gold and silver, right back to March 1968, has been +0.62 (rolling one-month basis). It would be +1.0 if they moved precisely in lock-step, and –1.0 if they moved precisely opposite. Gold's correlation with US stocks over both the last 40 and 10 years, for comparison, is almost exactly zero. Gold's famous correlation with the Euro has been +0.51 since the start of 2000. Whereas, during the bull market of the last 10 years, the statistical link between gold and silver has risen to average +0.68, and it's stronger again at +0.77 for the last 5 years.

Silver, in short, tends to follow gold very closely – more closely than pretty much any pair of assets you can name over the long term – but with bells on. Risk-free it ain't, but neither is cash-in-the-bank. The appeal of Buying Silver to profit from inflation looks set to gain ground.

You can start with four grams of free silver here.