END_OF_DOCUMENT_TOKEN_TO_BE_REPLACED

Silver prices looked overdone to many players at $50. Its drop surprised even them...
SILVER's photovoltaic use by the solar industry played a big part in the metal's surge to $50 per ounce this week in April 2011, writes Miguel Perez-Santalla at Bullionvault, completing his 2-part analysis of silver's peak 3 years ago.
But while the PV industry's role in creating what many investors saw as a silver shortage 3 years ago was far more talked about than true, solar did then play a very real part in the fundamental drop in demand which resulted from that spike.
In the three years since April 2011's jump to $50 silver, the energy industry has significantly reduced the amount of silver needed for photovoltaic paste in solar panels. This "thrifting" means that a solar panel of the same dimension produced after 2011 contains significantly less silver than the older versions, up to 80% less in some applications. Because the investment surge which drove prices higher fundamentally dented silver's appeal to this major consumer industry. In fact, it dented silver's use across those industrial applications which rely on it. Full-year 2012 demand from industry was, according to the Silver Institute's data from Thomson Reuters GFMS, down by 7% from the peak of 500 million ounces in 2010.
In contrast for investors, it was the speed of the drop in silver prices following its $50 top of 3 years ago which drew so much ire. Some proceeded to persist with claims to US regulator the CFTC requesting investigations, even bringing a lawsuit against major bullion banks J.P.Morgan and HSBC alleging some kind of manipulation. Within the last twelve months both the CFTC and the 2nd US Circuit Court of Appeals in New York have found no indications of collusion or criminal abuse of the silver market by any parties. This was no surprise to industry experts. But the speed of silver's plunge did surprise, and hurt, many investors and traders.
The silver market is much smaller than the gold market, and at times suffers from great volatility. Comparing what's called "Open Interest", which is the number of contracts open on any given business day in the Comex futures market, gold is at least twice the size of the silver market. In London's over-the-counter market (where participants deal with each directly, rather than through standardized contracts on a formal trading exchange) the value of gold trading has averaged 8 times that of silver over the last 3 years. This means that a trade considered small in the gold market may actually be large in the silver market, because it has fewer participants willing to buy or sell at any given time. 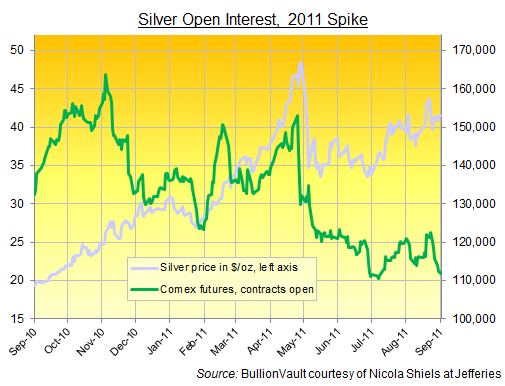 Interestingly, during the price rally from September 2010 to the high in April 2011 open interest in the silver futures contract – though it did grow – was not astronomical or out of proportion to previous historical figures. So while though there was good participation in the marketplace it was not out of the norm for that time period.
The first signs that money was departing the market however came on 25 April 2011 when the CME first raised margin requirements on contract holders. This meant you needed to have more cash on hand to hold the same position you had the day before. The next big decline registered in market participants then coincided with another increase in margin requirements on 5 May.
There is nothing abnormal or suspicious here. The exchange needs to make certain that holders of leveraged positions are viable counterparties in a volatile market. So they ask for greater protection. Holders who don't have the financial means to meet the new requirements then liquidate some or all of their contracts.
Increased silver margins in April and May 2011 did of course take a toll on the price, as would be expected in an extremely volatile market. Liquidation added to the downward momentum and kept the prices subdued moving forward. Between 25 April and 27 June, Comex open interest in silver futures shrank 23% as the silver price dropped 29%.
It is apparent that the weakening price combined with the new margin requirements were of direct influence on open interest. Because as the silver price declined those holding contracts at higher prices would need to raise more cash to meet the exchange requirement or sell their contracts. It is my estimation that many traders holding long positions felt that trying to stay in the market would be the same as trying to catch a falling knife. If they were in the black they took their profits and if the traders were in the red they didn't want to suffer any more losses.
Looking at the preceding chart, you can see that price was more volatile than the contract liquidations. Additionally, looking at the holdings of SLV – the largest silver exchange-traded trust fund – during that period, it was more stable again, declining only 15% to a balance of 309 million ounces. Comex warehouse stockpiles of silver bars only fell by 2.8 % for a balance of 99 million ounces. This would make it apparent that the violent price swings were not caused by any direct fundamental factors from physical investment holdings.
So what led the selling? Further up the supply chain, the spike was of course an opportunity that silver miners could not resist. If they think the market is overdone, they need to sell metal for future delivery, and that is exactly what started happening.
In an article published in February of 2011, the Wall Street Journal reported one such company, Boliden, was taking advantage of what they believed were already very high prices versus their cost of production. Many public miners would have had greater difficulty to do so as they had come under fire from shareholders in the past after the lack of participation of the initial upward of the commodities sector which began in 2006. Hedging for many had become a bad word but at the high levels in the beginning of 2011 it would have behooved them to buck the status quo and make the sale.
Come March of 2011 there were many analysts also calling the silver market too high, too hot and a bubble. Analysis from HSBC Global Asset Management added to this growing sense of an impending market correction. In hindsight of course we all knew it was coming. But some investors, led by claims of that $50 silver shortage in 2011 became more caught up in the bullish rhetoric than others, and some were obviously still buying. What surprised everyone was the volatility in silver's initial drop, tempered into summer 2011 only by gold's separate, smaller but equally dramatic surge to $1900 per ounce.
Day traders and high frequency hedge funds (running HFT programs) love volatility. This is because at times of great price moves, more opportunities arise for them to get in and out of the market with quick profits. Given the huge spike in Comex silver trading volumes, we can assume that such short-term players were primarily buying as the price rose and selling while the price dropped, tracking and extending the market's direction as this chart shows. 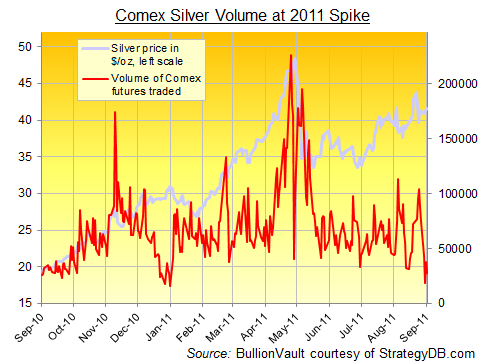 So here, with hindsight, are some fundamental, geopolitical and economical considerations unique to the silver market's $50 peak of April 2011.
The story was good at the time, though many market people, including me, kept scratching our heads as the price kept rising. The way I look at it however the market is always right. All the participants' actions dictate where the price goes, which is why you step aside when you don't understand the level it's got to. Silver looked way overdone, but the real price at any given time is what the market will bear.
Was silver worth $50 an ounce? Some buyers thought so, but I fear many more probably never gave it a thought. Someone will no doubt pay that much again. What silver is worth is determined every day in what we call the market place. When I want to know what it is worth I look to the last price it traded in the market where I would participate. So in physical investment silver, I look to the BullionVault order board just like anyone else using that simple, low-cost platform.