END_OF_DOCUMENT_TOKEN_TO_BE_REPLACED

Gold and silver demand is swamping supply as prices fall. Or so the bug-o-sphere claims...
The MAINSTREAM media...like all bank analysts and big-money fund managers...has become almost universally bearish on gold and silver investing, writes Adrian Ash at BullionVault.
It's so bearish, in fact, even some mainstream pundits think this must mark a 'contrarian' signal to buy. (Even if they do recommend doing it with derivatives!)
Maybe. The bearish chorus might of course prove self-fulfilling – and drive prices still lower – like it did in the five years before the bull market began at the turn of the millennium.
But for private investors trying to spot the difference, there's another group-think problem...this time outside of the mainstream.
Because the bug-o-sphere has got it into its head that demand is overwhelming supply – even as prices have dropped – and a big shortage of metal is building in world markets. Especially in silver.
"Another silver shortage?" notes one, lonely comment here. "Never heard that one before LOL..."
Fact is, London's wholesale market is awash with big bars of precious metals right now. Industrial users of platinum and palladium aren't jumping in to build stockpiles despite these low prices, while Indian gold suppliers have been selling down their stockpiles as the summer lull bites. And in the Western world's retail market for silver coins and small bars, supply is recovering fast from July's pop in demand.
The big UK and European retailers, for instance, today have plenty of silver for sale...everything from 1-oz Britannia coins ( if you buy 100 or more, you'll pay 31% over buying London silver on BullionVault)...to big 5-kilo bars ( costing German savers 22% more than Zurich silver).
As for the United States...source of 40% of global demand for silver coins...Silver American Eagles are now marked 'Back in Stock' at major retailers too. That includes 20-coin tubes of 2015 vintage ( costing 32% more than buying Toronto silver bullion at live wholesale prices)...and the big 500-coin monster boxes ( some 23% above Singapore-vaulted silver in Euros).
Note also that last month's bargain-hunting came thanks to the price drop, not in spite of it. The response was much smaller than in 2013. Much smaller. And some other private investors sold metal last month as well.
We can't confirm what investor selling of small bars and coin was like. Data from the big coin mints only say how many units were bought. But the number of people cutting or quitting their holdings on BullionVault rose 28% in July from June in silver. In gold, it rose 50% to the highest number since prices spiked upwards in January.
Now that we're into August, trading has slowed markedly, as it always does. This summer's lull may feel much quieter than usual too, coming as it does after the strongest growth in BullionVault users' gold holdings for 3 years.
Still, if you're thinking about going against the crowd – and quietly making a purchase amid the deafening chorus of bearish opinion – the current situation should appeal.
Lots of metal...at low prices...makes a far better time to buy than when supply does become tight...and prices are high.
Just remember that, for the time being, you should check claims of a surge in demand here, here or here before swallowing the idea of anything like a shortage developing.
And if anyone says prices should be stronger because supply is down, also get them to check their data again – or simply try looking for a first time.
Yes, investment bank Goldman Sachs says only 40% of gold miners will have positive free cashflow at $1000 per ounce.
Yes, the wipe-out in commodities more broadly means more miners are set to start closing more projects, says fund manager Evy Hambro. And yes, the slump in mineral and energy prices is starting to bankrupt smaller exploration firms.
But running a giant gold mine isn't like turning a tap on or off. Shutting production carries costs of its own – a fact currently delaying any 'wave of closures'. Lower gold prices also mean miners need to dig up more ounces to earn the same income and service their big debts.
Fact is, global gold-mining output hit a new record in 2014...fuelled by the huge exploration spending and over-investment of the earlier price peak. Prices last year, you may recall with a wince, averaged some 25% below the peak year of 2012. Yet world gold-mine production stood almost 10% higher.
"Two years after the price peak," says the latest Gold Survey Update from analysts Thomson Reuters GFMS, "2014 saw the gold mining industry’s output hit fresh record highs.
Now, at last, exploration has "slowed appreciably," GFMS adds, and project spending has been "aggressively cut by producers seeking to manage costs."
Even so, their analysts...pretty much agreeing with every other professional analyst...now expect that "mine supply will rise this year, but by less than 1%." 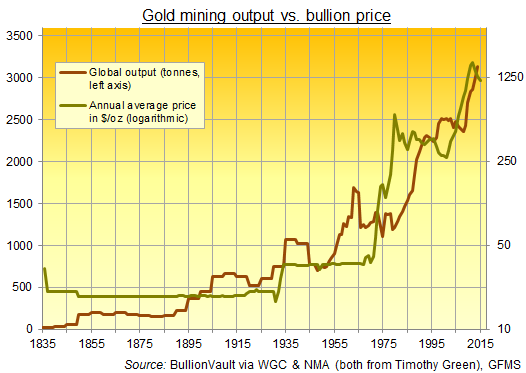 Output last plateaued at record highs in 1999-2001, and then began to ease back. That marked the last bear market's low point in prices, too.
Maybe that was coincidence. But the big bull market of 2001-2011 certainly didn't begin with a global shortage of precious metals for investment.