END_OF_DOCUMENT_TOKEN_TO_BE_REPLACED

Why does the silver price move so much further, and faster, than gold...?

The SILVER MARKET often gets a bum rap, writes Miguel Perez-Santalla at BullionVault.

The reason is that often the price gyrations are much greater than those of the gold market. What causes this? Often there are theories that bankers and investment companies are conspiring to try to manipulate the market. However, buying or selling alone is not a conspiracy. It is called a speculation.

Where conspiracy begins is poorly defined in law, especially where it's one through market trading. But one factor is true: market perception can be changed by those with big wallets.

There have been times over my 30 years in the precious metals markets that I felt perception was being directed, if not manipulated, by bigger players. One ploy used in the past was to move silver stocks off of the Comex to give the appearance of a supply shortage. Such a shortage would, other things being equal, eventually drive up the price, at which time the big holders could sell into the marketplace. Anyone doing this successfully would make a hefty sum of money. They might counter by saying they still took a risk, just like any other speculator, and as such earned their reward. Because such a plan may have failed and caused them to lose money as well.

That being said, I want to go back and look at the silver market versus the gold market. You will see why we have greater volatility – meaning price fluctuations – in the silver price. In the following illustration let's take a quick snapshot of the tradable instruments in gold and silver investment. 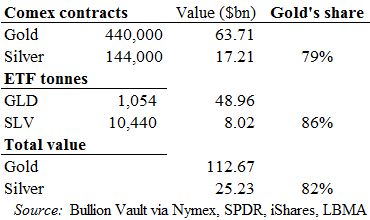 In the illustration I took Comex open interest for both gold and silver contracts, and the holdings of the largest single gold and silver ETFs. Combining them to see their total dollar valuation, we can see that of all the dollars transparently held in these markets, gold commands 82% of the value. What this tells you is that the silver market, meaning the investment and trading side of its business, is significantly smaller than that of gold.

Why is this? The primary reason I believe is because gold is considered a currency. Whereas silver has had that position in the marketplace in the past, it does not in reality hold that weight currently. Because of this disparity, we have tremendous volatility in the silver market. In the following illustration I took the volatility index of the silver ETF and the gold VIX (volatility index) and graphed the two. 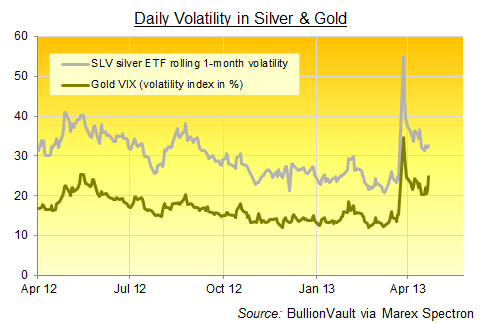 I use both these illustrations to make my point. It is not because of market manipulation that silver is so difficult to trade day to day. It is simply that gold is a much larger market and more liquid. When a market has many more participants, and a greater number of committed long-term buyers, this creates greater price stability. It is the size of the market that dictates volatility.

But does this mean that silver is a bad investment? I don't think so. Another reason that silver does not hold the same cachet as gold is because of the difficulties of handling the metal in larger quantities. Because it is less dense than gold it occupies more space, which means that storage and shipping costs are much higher. Due to these holding costs a lot of investors do not want to pay this expense.

But if demand were to grow significantly the holding costs would move lower as the turnover and volumes moved up, and that would help reduce the operating costs for active traders. One of the factors that are being looked at more and more in the silver market is its demand as a currency. Many economists (although not those that work for governments or banks) believe that we will be entering a period of significant systemic problems in the fiat currency system. Were this to come to fruition then gold supplies are not enough to support such a shift. However, silver offers an answer during these foreboding times.  At that point volumes and market participants could increase to where silver volatility would not be significantly greater than its partner gold.