END_OF_DOCUMENT_TOKEN_TO_BE_REPLACED

How silver investing's money motive got hamstrung 150 years ago in the US and India...
I'M CONSTANTLY reading books on the history of both gold and silver as money, writes Miguel Perez-Santalla at BullionVault.
A book I recently picked up on the history of silver currency in India relates more the actual operational use of money in their marketplace. The Indian peoples in the 19th century had no confidence in paper money. Though it was in use, it was not readily acceptable outside of the larger cities. Because of this silver was prominent in India.
Gold of course was of higher value than silver. Yet silver was the metal used more commonly for regular day-to-day business transactions than any other method in that time. The Indian people did love gold and esteemed it highly, but their preference to use silver for transactions outweighed the demand for gold.
Gold still came into the marketplace, just not at the same pace. Between 1836-1891 there would be 2.21 times mores silver than gold imported into India by value.
Back then, in the 19th century, the Indian subcontinent was still under British colonial control. In essence they did most of their business through Great Britain. The technology shared and developed by the British helped the country modernize, notably with the addition of train lines which would support India's economic growth into the future. But the one complication in modernization was the country's greater use of silver over gold. This caused trade deficits moving forward.
Why? Great Britain had been on a Gold Standard legally since 1816 and effectively since Sir Isaac Newton got his sums wrong 100 years earlier and cut the price of silver to 15.5 from 12 ounces per ounce of gold. So all accounts for Pounds in reality were denominated in gold. Invoices for the services provided by the rail developments were of course in Sterling, which although its name came from silver now meant being payable in gold, or gold-backed paper Pounds. Hence the Indians suffered when the value of silver fell versus gold. Because any debts to the colonial mother country were due in kind.
Oddly, India's silver money trade balance problems really began with big trade surpluses. During the Civil War of the United States of America between 1861 and 1865, the Indian sub-continent – which was rich in natural resources – filled the gap of need for many of the products that traditionally were imported from the US into the United Kingdom. India enjoyed a tremendous boom in exports, and so its balance of currency, received in gold and silver, grew. But the traditionally greater demand for silver to use as money for domestic commerce would soon affect them negatively. Because silver money was slowly being devalued and then rejected by the world's rising power, the United States of America.
Already, on 3 March 1849, Congress authorized America's first $1 gold coin, and launched the $20 gold coin, making both "legal tender for all sum whatsoever". This bill effectively de-monetized silver, but many people in the US were unaware of this change, and continued to use silver coins concurrently with paper money. There is no doubt however that the Bank of England in London had held sway over John Sherman, the politician behind the bill, in its goal of bringing other countries onto Great Britain's mono-metallic standard.
Even though this bill had been passed, the next half-century would see new bills attempt to reintroduce silver as an acceptable form of payment and currency in the US. Firstly, because it was then (as now) a major producer of silver, the US had a big "silver lobby" active in Washington DC. Secondly, silver money continued in wide use amongst ordinary people.
In the year 1873 however, another currency law – the Fourth Coinage Act – reaffirmed gold's place as the monetary standard, by ending the ability of silver owners to have their metal turned into coins by the Mint. Again, John Sherman was closely involved. Major uproar followed from the silver lobbyists, who called it the "Crime of 73".
A bill finally passed in 1891 was again unsuccessful in reintroducing silver as the main money standard, but the Sherman Silver Act (yes, him again) did add government support for the silver industry. Because it set the official price of silver at 15.988 ounces per ounce of gold, and confirmed that the US government would continue to buy silver at that ratio to use for payment of debts. Five years later, however, the US would officially and irrevocably join the gold standard. By government order, silver perpetually lost its place as money on the books of the United States in 1896.
Since the US was a still a major silver mining producer, a surplus of silver developed, as it was no longer needed for payment of government debts. This lowered the price of silver against gold, and back in India – as US manufacturers and commodity producers also rejoined the international markets after the Civil War – traders suffered losses in exchanging their silver for gold.
Looking back, it's interesting to note that, time and again, as European and then the US nations came to stop using gold as their monetary standards in the 20th century, their central banks continued to hold large quantities in reserve. But silver had already been demonetized a century earlier, while gold ruled as money. And just as central banks coordinated to end the use of silver money in the late 19th century, so they have since coordinated to use only gold as their reserve commodity today, reflecting ideals which have now become permanent in our modern monetary structure. 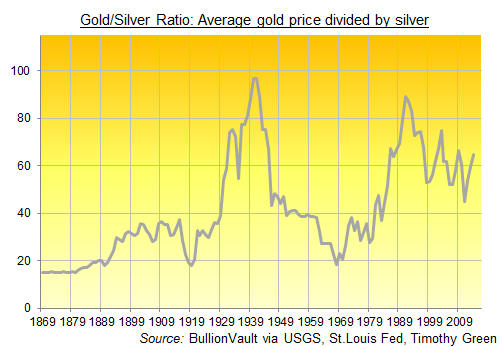 Because of this deep history and practice, there will always be a monetary uptake on gold that is missing in the silver market. Currently central banks hold over a trillion dollars in gold reserves basis today's $1250 per ounce price. None holds any sizeable or strategic silver reserves.
This missing volume of official purchases in silver precipitates the much higher gold-to-silver price ratios we are now accustomed to in this modern age. Currently around 64 ounces of silver per ounce of gold, over the last twenty years the ratio has traded primarily between the ratio of 30 to 90, a wide berth with opportunities to profit from short term imbalances in price moves.
Can silver once again regain a place in the fabric of the global monetary system? Is there any mechanism even remotely considered to put such an action in place? At this time it does not appear to be in the cards for silver.
Though many in the Western world still view silver as having a quasi-monetary value, its core value right now lies in its demand for industry and personal consumption as jewelry. Yet on the continent of India, where people today continue to have a high regard for both gold and silver over paper money, the question is not even viewed as a concern. Just because the central banks don't hold any investment silver bars does not mean it is not a good vehicle as an alternative asset. Indeed, from my vantage point, it may be beneficial. Because unlike gold, which suffered from heavy central-bank selling in the late 1990s, silver cannot face the same concerns about government's interfering in price action by reducing stockpiles.