END_OF_DOCUMENT_TOKEN_TO_BE_REPLACED

Silver demand continues to grow as gold seems to have lost its luster. Read about market machinations and learn the facts.

Silver has been resilient, though the price of the metal has not. What do I mean by that?

Since the collapse of precious metals prices started in May of this year we’ve seen valuations fall tremendously. Even greater has been the drop of demand for certain metals. Probably the most brutal attack on a metal that we can visualize is that of the gold ETF known as GLD. 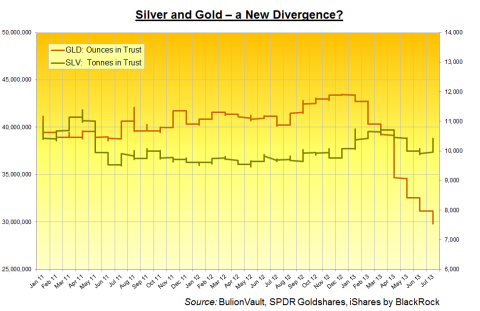 The coin market tells a different story with The US Mint selling silver Eagles at a brisk pace. At current levels, the year 2013 looks to be a banner year. If the US mint continues at this pace it will have increased sales by 50% year-over-year. Oddly enough, the 1 ounce gold US Eagle is also selling well. It is on pace to sell almost 48% more than the great year they had in 2011. This, I believe, is a very telling sentiment of the coin-consuming public.

So what happened to the GLD? The big funds and money managers dumped the GLD.  They did so because, on top of gold not paying any interest or dividends, it was now falling in price. They could not bear to extend their losses. The GLD does not dictate the market price.  Although it is an important factor showing sentiment among fund managers, especially those that invest in alternative assets. The market prices are dictated by the more liquid and highly traded commodities exchange, the Comex, where the bankers, large investment houses and hedge funds are known to participate.

Once gold came under pressure, so did the investment companies that need to show quarterly returns on a regular basis. If your paycheck or bonus was tied to your ability to manage your customer’s money, I would bet you that your decision would be to sell as well. Of course, these decisions are in the short term. They may well come back into the market later.

The silver ETF (SLV) has not succumbed to the same selling pressure. This is simply because the players in this much smaller market are different. Looking at the sales numbers of the publicly traded ETF and the US mint sales figures, there appears to be a direct correlation. Even the sales of US gold coins shows that this correlation is not about the price of metal, but about the confidence in the local and global economy at large. There is a lack of trust in the central bank system and the public are making their vote heard by buying gold and silver.

BullionVault’s Gold Investor Index confirms this. With the first major drop in the gold and silver price our customers remained bullish. Even throughout the consistent downfall, since April the gold investor index has remained firmly over fifty during these past months. (The Gold Investor Index is calculated using proprietary data from BullionVault, the 24-hour precious metals exchange which leads the online market for physical bullion. A reading above 50 indicates more buyers than sellers across the month.)

There are some who attribute the increased buying in silver to comments ascribed to the US Geological Survey, which say that known resources would run out in the next seven years. If this were true we would have run out of silver in the 1990s. The problem is that this is not a fact; it is merely another misinterpretation of data. The formula used the current known global silver mine reserves divided by current global silver mine production. It is calculated this way despite that the reserves in mine production are variable. The reserves of byproduct production are missing from the equation in large part. Of course without all the numbers it’s going to appear that silver will run out.  Without the reserves held in byproduct production the formula collapses. Between 70% to 75% of the global silver production comes from byproduct and not primary sources. This means that there is no shortage of silver coming anytime soon.

Others claim that silver is a better buy than gold because of the current ratio of silver per every ounce of gold,  which currently stands at 67 ounces. Looking at a thirty year chart, you would see a high of a little over 100 and a low of 14. Over the last five years we saw a high of nearly 84 and the low of 32. By looking at a graph you can see most of the time was spent somewhere between 40 and 70. Which would mean the current ratio is not too far off. But some people make money playing the ratio. In most cases though, you need to be very well-informed about the driving fundamentals and economic forces that drive the individual metals. I am not a fan of trading the ratio between the two metals because if you do not have staying power you have more risk than reward.

Is silver worth twenty dollars an ounce? Will it go higher? Everyone wishes they knew the answer to that but the motivation to buy one of the world’s first currencies remains strong. Gold and silver both remain important because they hold their value and cannot be manipulated by the central bank system which currently taxes the majority in favor of the minority by devaluing our holdings and earnings.

Since the detachment of the US dollar from gold in 1971, the printing presses have run rampant. Most recently the US money supply has increased by 42 ½% to $10.75 trillion according to statistics on the Federal Reserve site. It is hard to quantify what the actual value of the currency is but at this rate it will be no surprise to anyone when inflation does finally arrive. Owning precious metals as a hedge against inflation is only part of the reason to do so. Owning them as a hedge against economic catastrophe is probably more important.

If the US and global economies improve and the price of gold and silver weaken, we should take pleasure in our other endeavors bearing fruit. However, if the hundred year central bank experiment were to crumble, then it will have been wise to have been holding one or both of the only truly global international currency in our possession – gold and silver.