END_OF_DOCUMENT_TOKEN_TO_BE_REPLACED

Savers and pensioners! Your murderers need no revolution to storm your stately homes...

Shortly after, and as the First World War kicked off, Britain then abandoned the free exchange of bullion for notes under the classical Gold Standard. Those 3 events were a long way from simple coincidence, of course. But 100 years later, it is the monetary revolution which feels most pressing today.

Political fighting over the welfare state is hotting up, but a European shooting match looks unlikely (for now). Whereas UK savers and retirees risk getting slaughtered, alongside their peers on the continent, across North America and pretty much everywhere else. 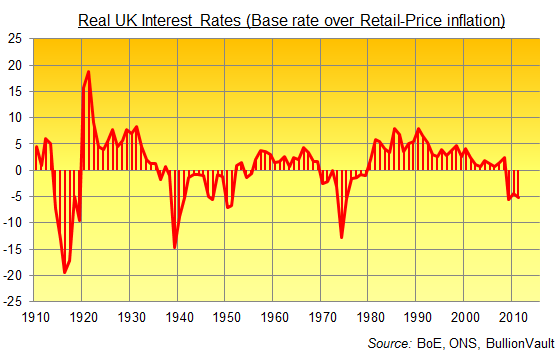 Compared to the previous 100 years, real UK interest rates – the returns paid to cash deposits over and above inflation – have been atrocious since 1911. Averaging less than 0.9% per year, they've been a fraction of the 4.4% averaged in the 100 years starting in 1811, just after the British Parliament's Bullion Committee recommended a full return to gold following the Napoleonic Wars, setting in train the global Gold Standard run from London until the start of World War I.

Enough ancient history; fast forward to today, and the UK's real rate of interest is now the worst since 1975, back when inflation was running well into double digits but at least the central bank made a pretence of addressing it, setting a nominal base rate of 11%. Last month's inflation reading was only a 20-year high, but all-time record-low interest rates make cash such a losing proposition, savers are actively paying to hold cash in the bank. And these unsecured creditors are lending to institutions whose "underlying problem is one of solvency not liquidity" as Bank of England governor Mervyn King himself put it in a speech this week.

Losing real value by holding money with insolvent banks sounds like financial suicide. Which for today's moneyed classes – those millions of savers, pensioners and would-be retirees raised by the welfare state – should sound uncomfortably like the "euthanasia of the rentier" hoped for in the mid-1930s by J.M.Keynes, apostle of deficit spending (and nemesis of the Gold Standard), and slowly put into practice after World War Two by decades of sub-zero real interest rates. Taxation of unearned income peaking at 98% sure helped, too.

"Interest today rewards no genuine sacrifice, any more than does the rent of land," wrote Keynes in 1936, just ahead of that "depression within a depression" which forced economists to coin a new term, "recession".

"The owner of capital can obtain interest because capital is scarce," Keynes went on, "just as the owner of land can obtain rent because land is scarce. But whilst there may be intrinsic reasons for the scarcity of land, there are no intrinsic reasons for the scarcity of capital...I see, therefore, the rentier aspect of capitalism as a transitional phase which will disappear when it has done its work...The euthanasia of the rentier, of the functionless investor, will be nothing sudden, merely a gradual but prolonged continuance of what we have seen recently in Great Britain, and will need no revolution."

Today's savers might not see themselves as "functionless investors" anymore than they see themselves as stuffed-shirt aristocrats wielding "the cumulative oppressive power of the capitalist to exploit the scarcity-value of capital". But the owner of capital, however modest, can no longer obtain interest, that much is plain. Because capital is no longer scarce. Solvency is. And there's a whole heap of 21st-century rentiers waiting to put out of their misery yet.